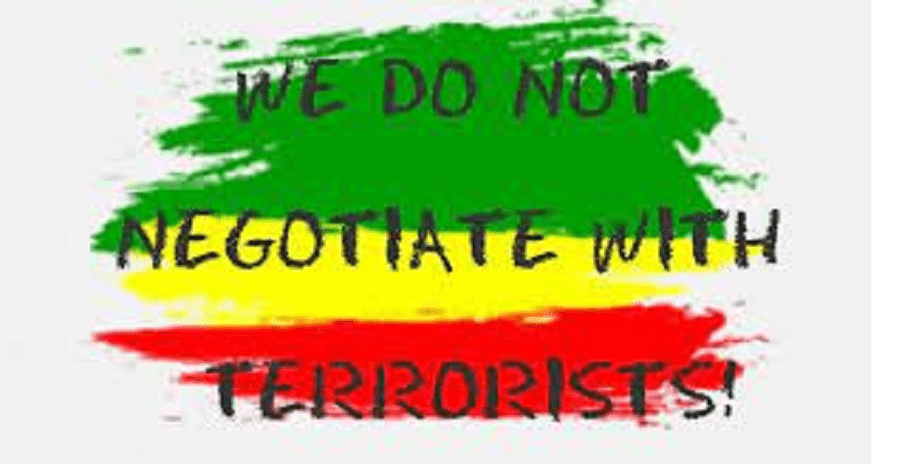 The people of Ethiopia are marking one year of the massacre that terrorist TPLF has staged on the members of the National Defense Forces of Ethiopia stationed in Mekele.

Supported by a treachery and treason organized by turncoat officers entrenched in the Northern Command of the Ethiopian National Defense Forces (ENDF), terrorist TPLF’ so called Special Forces attacked the headquarters and divisions of the Command on a restive midnight of November 4, 2020 cold bloodedly murdered offices who were not in action.

A couple of days back before the attack, the members of the army were busy supporting local farmers to prevent swarms of locust from attacking their farmlands. However, Terrorist TPLF forces committed crimes against humanity and violation of human rights in shamelessly defying the standard norms of behaviors set for any armed force across the globe.

This planned predatory massacre was part of the strategy set by terrorist TPLF 47 years plan to destroy the history, sovergnnity and territorial integrity of the country and set up terrorist TPLF led confederation of ethnic principalities in the country. This hate based political rancor conducted over 27 years of oppressive leadership took various forms of oppression and suppression when terrorist TPLF assumed power under the guise of EPRDF, including imprisonment of hundreds and thousands of innocent Ethiopians, conducting untold tortures including castration on inmates.

The barbaric massacre was the first step in terrorist TPLF’s effort to destabilize the entire Horn of Africa and incite a reign of terror in the entire region. The government of Ethiopia had to take a swift action for restoring law and order in the region as provided in the country’s constitution. It took only three weeks for the ENDF to restore order in the region while the fascist leaders of TPLF were killed, captured or fled to their foxholes in Kola Tembien in panic.

The government established an interim administration of Tigray to ensure effective relief and rehabilitation program. Services like hospitals, health centers and clinics destroyed by the vandals were restored. The government expended more than 100 billion Birr for conducting relief, rehabilitation and reconstruction of service delivery facilities including banks, communication and internet facilities. Special support was provided to farmers in the region though the provision of agricultural implements, fertilizers and improved seeds.

The government declared a unilateral ceasefire and moved the ENDF out of Tigray in order to provide a peaceful farming season for the farmers in the region. The group rejected the ceasefire and continued with its provocative acts. Exploiting the situation, terrorist TPLF forces entered Mekele and falsely claimed that they had defeated the ENDF in a situation where there was no war. They killed some of the members of the interim government, looted government and private institutions and exacerbated the already bleak situation in the town worsened by absence of basic social service facilities most of which were damaged by the terrorist forces.

As part of their program to dismember Ethiopia, terrorist TPLF forces invaded Amhara and Afar regions destroying and looting anything they have come across in which USAID and UNICEF warehouses and other depots of international philanthropic organizations were not spared.

Terrorist TPLF conducted the most unprecedented crimes against humanity and violations of human rights in Fenti Resu, Glakoma, in Afar region, Mersa, Woldeya Gashena,Agamsa, Debre Tabor,Chena and several other districts in Northern Wollo and in Setit Humera and Mai Kadra  in Metekel at Benishanguel Gumuz Region.

The whole western media outlets fell prey to the propaganda and misinformation campaign against Ethiopia blaming the Ethiopian government for everything under the sun including their false report depicting the massacre of November 4 as if it was conducted and initiated by the government.

From November 4 onwards, the some western powers  has provided diplomatic and media support through their various networks. The media outlets have been engaged in misinforming the world on the real situation in Tigray and the rest of Ethiopia.

Through the whole year since the massacre, the some western powers and the US were calling for negotiations and dialogue which was rejected by the terrorist TPLF. They continued to blame the Ethiopian government for obstructing a smooth flow of relief supply while in fact the culprit was terrorist TPLF which took the war to Afar area in an attempt to chock Ethiopia by blocking the trade route to the Port of Djibouti.  Throughout the whole year, the west and the US never condemned the genocidal crimes and crimes and human rights violations conducted by terrorist TPLF. Regrettably, the US declared unjustified and hasty sanction on Ethiopia.

The tragic event of November 4 is a reminder of the fact that ethic based exclusive politics is a threat to the survival of Ethiopia as nation. It clearly shows how hate based narrow nationalistic sentiment could ruin the entire socio-economic fabric of the country and make it vulnerable to foreign intervention and aggression on the country.

Moreover, the incident clearly shows that terrorist TPLF is an organization formed on slanderous lies and false propaganda, hatred, and a phantasm of greatness that haunted its misinformed members who have blindly followed it outdated dogma and political eclecticism.

The attack of November 4 indicates that terrorist TPLF has no respect for humanity and would do everything at its disposal including “ going to hell” to destroy the political order in Ethiopia.

For some 47 years, terrorist TPLF worked on destroying the national identity of Ethiopia and prepared a systematic program for destroying the country from within and without. It controlled the political system of the country by placing its leadership on key political and military leadership and created a manipulative and disruptive sprit of hatred among the people of Ethiopia by fanning on a distorted version of self determination, democracy and good governance.

Nonetheless, it is regrettable that the international community has either deliberately ignored the situation in Ethiopia or has just allowed to let it go. The UN was busy trying to incriminate the government of Ethiopia under the influence of TPLF for crimes that have never proved to be committed. It is also interesting to note that even the AU Commission of Human and Peoples Rights is illegally attempting to investigate human rights violations in Ethiopia without involving the concerned stakeholders including the Ethiopian Human Rights Commission.

Although the west and their media have continued to accuse Ethiopia for obstructing the flow of relief aid to Tigray and in spite of the fact that western relief agencies are concerned about the relief situation only in Tigray, a couple of weeks back terrorist TPLF blocked a jet plane loaded with relief food to land at Mekele Alula Abanega Airport resulting in total stoppage on flights for emergency relief assistance to Tigray.

Whatever crimes terrorist TPLF commits is either met with total indifference or promoting such crimes as a bravery of terrorist TPLF on western international media outlets.

The terroristic and savage massacre conducted on the members of the ENDF will remain in the memory of all Ethiopians here and abroad and history will record the sacrifices paid by the martyrs of the attack on November 4, 2020.

The day has a special place in the minds of all Ethiopians. It is also one of the challenging incidents in modern history of the country. The betrayal attack was aimed at exposing the country to foreign enemies. But the gallant Ethiopians have thwarted the wish of TPLF. Ethiopians across the nation have now been mobilized to defend the sovereignty and territorial integrity of the country by destroying this tyrant group.