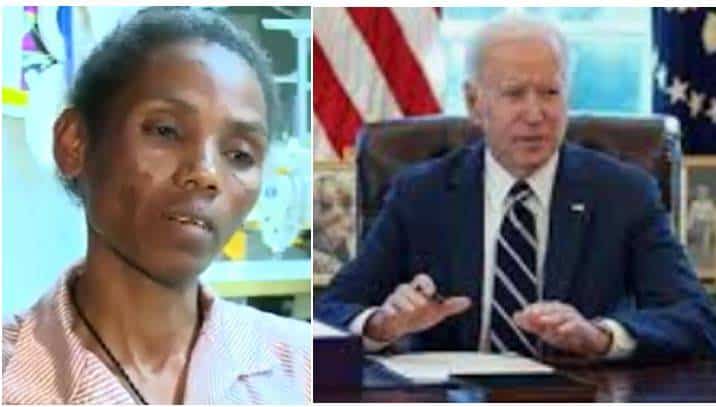 I know you don’t care.

I have given up on you, so you could say I don’t care either.

But there was a time I cared.

I cared so much I supported you wholeheartedly in your presidential bid.

A damned fool I was. But I am not alone. Virtually, the entire Ethiopian American community of voters and donors feels betrayed by you.

Someone even asked me, “Is it Joseph Biden or Judas Biden?”

Almost exactly a year ago to the day, I cared so much I endorsed your presidential bid in my blog read by many thousands entitled, “I Support Biden-Harris Because I Don’t Want America to be AmeriKKKa!”

I stumped for you mobilizing fellow Ethiopian American voters and others to act with the fierce urgency of now.

I echoed your message, “Joe Biden says, ‘This campaign isn’t just about winning votes. It’s about winning the heart and, yes, the soul of America.’”

I harangued on your behalf, “The soul of America has been hijacked by a lying con man for the past four years.”

I urged, “We must mobilize our friends, neighbors and colleagues to vote out Trump. On November 3, 2020, America shall triumph over AmeriKKKa!

Oh! What a difference a year makes.

The TPLF ran a vicious system of ethnic apartheid in Ethiopia for 27 years. The TPLF created apartheid style bantustans called kilils (or kililistans) in Ethiopia pitting Ethiopian against Ethiopian.

I guess Ethiopia is just another “s**t hole country” for you, as is Eritrea and Somalia.

But there are a whole lot of energized and raring to go Ethiopian American, Eritrean American and Somali American voters in Virginia.

On November 2, 2022, they will be coming out to vote and show you how much they care about you and Terry McAuliffe!

But I am not writing to register my complaints or gripe.

Joe, you must hear Tewabech’s wail over her sorrow and travail over AGOA

I am writing this to deliver a message from one woman whose very existence and her family’s depends on whether Ethiopia remains in the AGOA program.

Let me make it clear: I know your administration has already decided to remove Ethiopia form AGOA.

So, why am I wasting my time writing this piece?

First, I want you to hear Tewabech  Shaba’s message to you. Tewabech works at the Hawassa Industrial Park which will be severely impacted by exclsion of Ethiopia from AGOA.

Second, you can make it right and let Ethiopia continue if you want.

Tewabech is not unique. She speaks for hundreds of thousands of women like her upon whose heads the Africa Growth Opportunity Act (AGOA) dangles like the Sword of Damocles.

Read Aloud:   Concerned Ethiopians Across the Globe Communique Urging Prevention of Genocide and Balkanization of Ethiopia

But I have been to Hawassa Industrial Park where she works.

I have talked to Tewabech’s managers and supervisors.

When I returned to Ethiopia, after living in America for 48 years, the very first place I went to see was the Hawassa Industrial Park.

After nearly one-half century away from my country of birth, the first thing I wanted to see was Ethiopia’s rudimentary transition to industrialization.

I spent the whole day at Hawassa Industrial Park watching rows upon rows of young women at their workstations sewing, assembling, sorting and packaging garments with quiet dignity. I even broke bread with them.

They worked with their noses to the grindstone and shoulder to the wheel.

I observed the assembly line crank out finished and semi-finished garments like clockwork.

It is hard work that requires skill and high level of quality control.

I was privileged to be given the opportunity to inspect the finished shirts. The quality of craftsmanship was first rate. Outstanding exports to the U.S. market!

I did not meet Tewabech when I visited Hawassa Industrial Park, but I met many like her.

Tewabech is a poor woman with little education.

Everyday Tewabech and the hundreds of thousands of young women like her walk on the knife’s edge of survival, teetering on the cusp of a black hole of poverty.

Tewabech and hundreds of thousands of nameless, faceless and dreamless women like her toil in factories every day for little pay.

They are “The Nobodies”. Nobody’s children, owners of nothing. The no ones running like rabbits, dying through life, screwed every which way.

It must have been for Tewabech and the thousands of others like  her that Edward Galeano composed his verse:

Fleas dream of buying themselves a dog, and nobodies dream
of escaping poverty: that one magical day good luck will
suddenly rain down on them- will rain down in buckets. But
good luck doesn’t even fall in a fine drizzle, no matter
how hard the nobodies summon it, even if their left hand is
tickling, or if they begin the new day with their right foot, or
start the new year with a change of brooms.
The nobodies: nobody’s children, owners of nothing. The
nobodies: the no ones, the nobodied, running like rabbits,
dying through life, screwed every which way.

Here is Tewabech Nobody’s message to you.

My name is Tewabech Shaba. I have been working at Hawassa Industrial Park for about four and half years. I used to work at Hawassa Poll Company for a small salary. When I started working, I was paid extremely low wages at Poll factory, one hundred birr (little over USD2.00 [two dollars current value]). When I gave birth to first daughter, I stopped working there because I did not have anyone to help me with childcare. Then I started working as a laundry worker. As I was doing that, Hawassa Industrial Park was under construction. I applied and got this job when it opened. I have two children. I get up early and make breakfast for them. I wake up my children, wash them and then take them to my mother so she can look after them while I am at work. The reason I can’t keep them at my house is because I don’t have the money to hire someone to look after them. My income is extremely small. I can’t hire a worker. I have a husband, but he is a day laborer with very low wages. If he gets day jobs, he will work. I have no other income. That is how I take care of everything. Rent money, buy milk, everything.

Tewabech does not know much about politics, diplomacy, foreign policy or AGOA.

But she knows about the threats issued by your administration that if the Ethiopian Government does not negotiate with the terrorist TPLF, Ethiopia will be kicked out of the AGOA program.

When I was a kid growing up in Ethiopia, I used to sing a beautiful African American spiritual, “He’s Got the Whole World in His Hands”.

I am sure you know it too.

Tewabech and thousands of others like her believe you’ve got their whole world in your hands.

Your decision to keep or remove Ethiopia from AGOA is the difference between life and death for them.

How does it feel to be god, Joe?

If you remove Ethiopia from AGOA, you will have become death, the destroyer of worlds for so many poor nameless and faceless women laboring in factories in Ethiopia.

There is a morality tale that crystallizes the immorality of removing Ethiopia from AGOA.

It is a morality tale told by Native Americans of the United States.

In a small village there lived a wise old man to whom everyone turned for guidance and advice.  One day, a young boy decided to confront the old man with a question he believed will stump him.

The boy’s plan was to find a little bird and hold it cupped in his hands hidden from sight.  He would then approach the wise old man and ask him to guess what he has in the palms of his hands. Then he would ask him if the bird is alive or dead.

The boy asked, “Wise old man, can you tell what I have in my hands?”  The old man responded, “From all the small feathers sticking out of your hands, it is obvious you are holding a little bird. The boy followed up, “But is the bird alive or dead?” The old man paused and looking the young boy in the eyes, said, “Whether the bird is alive or dead is in your hands my child. The choice is yours.”

So is the fate of Tewabech and the hundreds of thousands of young women like her toiling in the garment factories.

Read Aloud:   His Holiness Abune Morkrios patriarch of the Ethiopia, Easter Message for all Ethiopians around the world.

You have their world in your hands, Joe.

Will these wailing women live or die?

You can give them a hand up or cut Ethiopia off from AGOA and let them free fall into the abysmal vortex of joblessness, homelessness, hopelessness, helplessness, defenselessness and dreamlessness.

Whether Tewabech and the hundreds of thousands of women factory workers shall live or die is up to you.

They are the helpless humming birds sitting cupped within the palms of your presidential hands.

Do what you gotta do, Joe. Play god if you must.

But remember Tewabech’s wail about her travail, “If the factory is closed [because of AGOA], the day will turn into night for me.”

Remember what you do to the least of them, the wailing women of Ethiopia’s factories, will be done unto you. You shall reap what you sow.

Do the right thing, Joe!

Do what is written in Jeremiah 9:17: “This is what the LORD Almighty says: “Consider now! Call for the wailing women to come; send for the most skillful of them.”

Joe, listen to the wailing women factory workers of Ethiopia. Listen to their voices of pain, fear and existential anxiety. Their laments are the memory of what and who will be lost if Ethiopia is removed from AGOA.

Joe, call for the wailing women factory workers of Ethiopia. Help the most skillful of them!