They  Have Failed to Climb the Steps of the Intellect Pyramids!

Trusting habitual traitors and blaming them for betraying again is like believing in Satan and blaming him for doing the job he was created for! 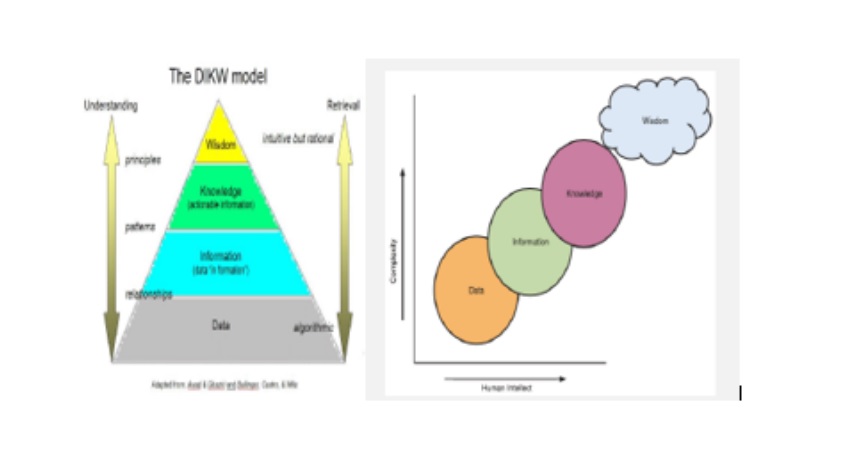 It is not unusual to observe that many educated Ethiopians, especially those who claim they have earned PhDs and MDs,  consider themselves as intellectuals. But are they intellectuals in a real sense? According to the Data, Information, Knowledge and Wisdom (DIKW) Pyramid, wisdom is the last stage of intellect and data analysis or exploring past events is the infantile stage of knowledge.

Carrying a clean conscience in their skulls, most of our forefathers were capable of analyzing the past to predict the future. They used to predict individuals’ future abilities based on their past activities. Predicting the future achievements based on the past accomplishments was the culture of our ancestors. Based on these core principles, our forefathers never elected a volunteer slave, a liar, a traitor, a looter,  or a coward as Gobez Aleqa, Shimagille, or Atbia Dagna. Our forefathers used to think in three dimensions for long not to give the hands of their daughters to uncultured and unprincipled boys or boys raised of such parents.

The Ethiopian elites salivated when the volunteer slaves such as Abiy Ahmed pretended to act as visionary leaders that stood on their own spines. Failing to stand by their forefathers’ principles and ignoring to read their past activities and resumes, the shallow elites blindly trusted the shameless volunteer slaves merely because they suddenly started to bark cunning slogans such as “Ethiopia is an addiction, alive or death we all are Ethiopians,” and so on.

These elites belittled principled citizens who analyzed these traitors’ past experiences and criminal records and cried not to support the criminals that murdered and tortured patriots that freed them. Defying the concerns of principled citizens and shouting the “national unity” mantra as an excuse,  the gullible elites failed to admit that these slaves were criminals, who were liberated by the martyrs they slaughtered.

Like an immature girl cheated by a cunning but useless boy, the gullible elites were miserably seduced by the slaves’ rhetoric and pretensions behind podiums. These elites failed to explore how  Legesse Zenawi’s gang group selected these slaves in order to establish its rule at the graves of Chauvinists and Neftegnas. The elites forgot that Legesse Zenawi’s gang group never assigned slaves that would unite Ethiopians or love Ethiopia to the climax of addiction.

As aliens that recently descended from Mars, these unprincipled elites acted as if they did not know that the criminal party Abiy Ahmed leads made the country land- locked, granted land to Sudan, promoted endless ethnic conflicts, massacred people, tortured and sterilized innocents. The pseudo- intellectuals did not want to remember that this party executed these atrocities and treasons after designing and building effective weapons. The elites do not want to admit that these effective weapons were Abiy and other volunteer slaves who were embraced like a darling first child by the unprincipled elites several years ago.

The unprincipled elites did not want to listen when principled citizens spoke loudly that trusting these criminal slaves is trusting Yihuda. Yihuda served Satan betraying Christos that groomed him as disciple. Similarly, these slaves served Legesses’s gang group betraying the people that cultivated them from cradle to adulthood.

The opportunist elites did not want to admit that Yihuda was a better traitor than the volunteer slaves they supported. Yihuda never hammered nails to Christos’s extremities, nor did he tie rope around his neck to gratify Satan. But these slaves, who are now supported by opportunist elites,  shot bullets and bombs to their mothers, fathers, brothers sisters and neighours to please their masters. Yihuda regretted his treason and committed suicide, but these slaves showed no remorse and placed themselves into seclusions. Instead of placing themselves into seclusions, these shameless traitors pretended as if they were visionary leaders to steal the hearts of the naive mass and unprincipled elites.  The elites failed to understand that these shameless slaves were regrouping themselves to stay in power for the coming decades.

The shameful Ethiopian elites were also supporting the traitor leaders of “opposition” political parties, who are currently dancing with the criminal leaders of the Ethiopian Peoples Revolutionary Democratic Front (EPRDF). How could an “intellectual” stand behind the traitor opposition party leaders that dine with the heads of EPRDF that massacred, amputated, sterilized and blinded the members and supporters of their political parties? What kinds of intellectuals support anyone who was in the leadership of a party that massacred people or traitor politicians that open a bottle of sparkling Champagne and cut a decorated cake with the murderers of their members and followers? What kinds of well-informed elite vote for these types of traitors?

Even after the massacre of at least 1.2 million and displacement of tens of millions of innocent citizens within the last 4 years, many Ethiopian elites are still failing to learn from their mistakes. Some still have faith in the EPRDF-2. Others blame the EPRDF-2 traitor leaders instead of blaming themselves for not using their flabby tissue in their skull to analyze the data about the past experiences and records of these traitors. Trusting habitual traitors and blame them for betraying again is like believing in Satan and blaming him for doing the job he was created for.

Einstein once said two things are infinite: the universe and human stupidity. It is not a character of a well-informed, knowledgeable, and wise intellectual to trust a habitual traitor and blame the traitor for doing his usual job-betraying.  Many elites fail to look into themselves and learn from their past and current mistakes. Failure to learn results from failure to climb all the steps of the DIKW pyramid ladder. Many Ethiopian elites have failed to admit and learn from their mistakes since they  have failed to climb the steps of the intellect pyramids.  Thank you.

No One Has the Right to Forgive on Behalf of the Dead Souls!
https://ecadforum.com/…/no-one-has-the-right-to-forgive-on…/ We Shall never Feed or Trade on Dead Souls!


We Shall never Feed or Trade on Dead Souls! | by Belayneh Abate

We Shall Never Forget the Dead Souls to Lick Ice Cream of Political Advantages from Blood Stained Spoons
http://ethioforum.org/we-shall-never-forget-the-dead-souls…/

The Mental and Physical Genocide of Amaras Is Intensified While the Amara Elites Continue to Eat Apples of Deceit!

Has Christos ever Negotiated or Reconciled with Satan?