The Amara genocide is intensified to eliminate Amaras and Christians from the Eastern, South, Central and Western parts of Ethiopia. But most of the onetime vocal “independent” Ethiopian medias are in deafening silence. It appears these medias are joining the genocide denier rulers, who are accused of participating in the continued Amara genocides directly or indirectly. 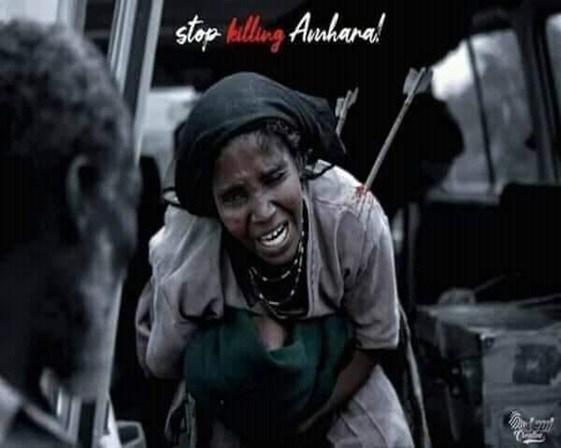 In October 2019 and June, 20020, we saw the gruesome slaughtering of Amaras and Christians of other ethnic groups in the southern, Eastern, Western and Central Ethiopia. As Ethiopians and part of the world population know,  the barbarian killers were shouting “get out Amara”, get out neftegna (a code for Amara), get out orthodox while they were killing the martyrs they identified prior to the killings. These heinous    barbarians  murdered even nine-month pregnant women in front of her children shouting, “kill the  unborn and the would be Christian.”

In September, 2020, they identified and slaughtered Amaras including toddlers, women, and elderly in North western part of Ethiopia. How further can genocide go  beyond the killing of unborn child, infants and toddlers based on his possible future identity? [2-7]

When the barbarians were slaughtering the unborn babies, children, pregnant women, the youth and the elderly, the local administrators  and security forces were watching idly  and, in some instances, reportedly participating in the killings. When the barbarians burned  the businesses and houses of citizens in Shashemene following the lists they compiled, they first controlled the gas stations to have unrestricted access for petroleum they used to ignite the fires. The local administrates and security forces did nothing to stop the burning of the residences and business centers of the victims. These evidences confirm the already established  facts that genocides do not occur without direct or indirect participation of local, regional or central governments. [2-7]

The central, the regional and local “governments” are now flatly denying genocide to complete the tenth stage of genocide and to insert sharp spears in the broad wounds of the genocide survivors and our conscience. Just like the other genocide- denier governments in history, these ruthless rulers  have started their futile attempt to destroy the evidences of genocides.  They are intimidating  genocide survivors  not to talk about their ordeals and forcing witness not to give information to the local and international medias.

It is an unavoidable responsibility of this generation to make the primary actors, collaborators and genocide deniers  face national and international justice. This responsibility should not be left to the next generations as it happened to the current generation of the Armenians.

In the meantime, the genocide survivors need physical, mental, and emotional support to mitigate their sufferings from  post-traumatic syndromes. Children who have seen their parents slaughtered like Easter lambs and dragged on streets like tree branches will never have a normal life. Parents who have seen their children beheaded and denied  timely burials will never live  healthily lives. Therefore, the genocide victims shall receive timely justice, and the genocide survivors should get strong assistance from the public, Churches, Mosques, psychiatrists and psychologists.

The Ethiopian independent medias please stop being the habitual spectators of genocides and make grave historical mistakes. You shall not keep quiet as nothing has happened since you do have  humanistic, moral,  citizenry and professional  responsibility to report the genocides, and expose the individuals involved in committing the genocides.