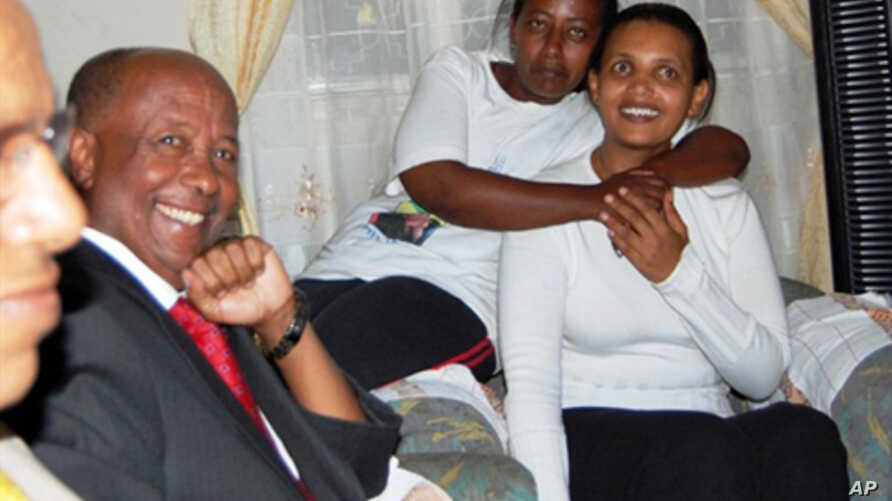 Ethiopian opposition leader Birtukan Mideksa has been released from prison, 21 months after authorities revoked an earlier pardon and ordered her to serve out a life sentence for treason.

Hundreds of delirious supporters greeted Unity for Democracy and Justice Party leader Birtukan Mideksa as she arrived at the modest house she shares with her mother and six-year-old daughter. She walked the last two blocks on a plastic red carpet that had been spread down the middle of the narrow lane leading to her gate.

Speaking from the prison van that drove her home, with her daughter sitting on her lap, Birtukan expressed relief her ordeal was over.

“I am happy, I am pleased you know. I feel very elated,” she said.

Asking about her time in prison, Birtukan said, “It was bad, it was good, too. For some time it was very horrible for me, especially the solitary confinement. I am pleased I am released. That is what is more important.”

Birtukan declined to say whether she might return to politics, but in a separate interview with state-run Ethiopian television she said she plans to resume her law career.

The 36-year-old former judge was among scores of opposition leaders sentenced to life in prison on treason charges following violent protests that followed Ethiopia’s disputed 2005 election. All were pardoned in 2007, after signing a letter admitting they provoked the violence. But Birtukan was ordered back to jail after she publicly denied responsibility for the troubles and said she had not asked for the pardon.

Ethiopia’s Justice Ministry issued a statement saying President Girma Woldegiorgis had pardoned Birtukan on the recommendation of the federal prison board.

The statement said Birtukan had made a formal request to Prime Minister Meles Zenawi last month regretting that she had ‘deceived’ the Ethiopian people by denying she had asked for the earlier pardon, and begging the prime minister for a second pardon so she could care for her aging mother and child.

The release came two days after Prime Minister Meles was sworn in for a fourth five-year term in office. His Ethiopian People’s Revolutionary Democratic Front and its allies won 545 of the 547 seats in parliament in last May’s elections, but European observers and the U.S. State Department said the conduct of the vote failed to live up to international commitments.

Birtukan’s pardon is seen as a magnanimous gesture to the international community at a time when Ethiopia’s weak opposition parties have been effectively demolished. The U.S. State Department’s latest human-rights report listed Birtukan as a political prisoner, while independent human-rights groups described her as a prisoner of conscience.