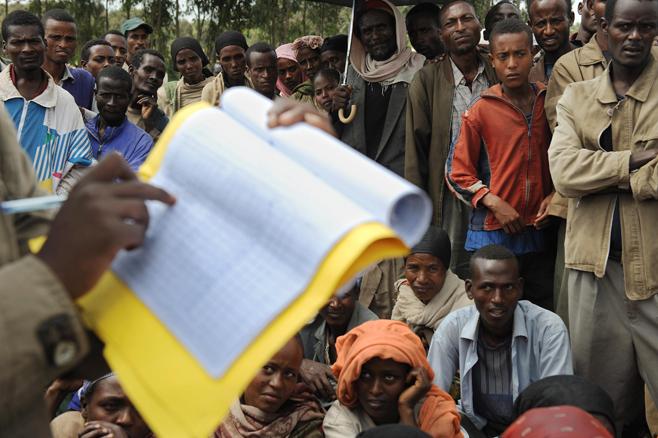 The child in the man’s arms is painfully thin. The father is hungry too. He lives in southern Ethiopia, where food shortages are an annual occurrence. There are food distributions in his village but the man, let’s call him Joseph, is a member of the wrong political party.

Joseph is a well-known critic of the ruling Ethiopian People’s Revolutionary Democratic Front (EPRDF) and openly campaigned for the opposition in his ward in the controversial 2005 elections and this year’s general elections in May.

His family has paid for his political views. His wife left him, taking the youngest children because, he says, she was tired of being hungry. Their eldest child, too old for the emergency feeding programs, remains with Joseph. The boy is 8, but looks like an undernourished 5 year old.

No one will hire Joseph because of his opposition ties. The land he’s allowed to farm has been reduced by the village chairman, a ruling party representative. And when Joseph sought to participate in a food-for-work program, he was denied. The day before he spoke to me, the chairman of his village told him: “You are suffering so many problems, why don’t you write a letter of regret and join the ruling party?”

Prime Minister Meles Zenawi has made a global name for himself as a reformer committed to eradicating poverty and making strong progress toward the United Nations Millennium Development Goals. In support of this progress – though there is some dispute about the accuracy of Ethiopia’s statistics – Western donors including the World Bank, the United States, United Kingdom and European Commission give more than $3 billion to Ethiopia every year. The money goes straight to the treasuries of the federal and regional governments for spending on public services in villages and safety net food for work programs.

These programs are run by the World Bank and jointly monitored by Ethiopian and donor officials. But the programs are so huge, the sums so vast, and the access granted by the Ethiopians to independent monitors so limited, that the bank and other donors mostly trust the Ethiopian officials to spend the money as agreed.

When the party faced protests following the 2005 elections, the government showed its sinister side, killing over 200 protesters, detaining around 30,000 opposition supporters and bringing treason charges against leading members of the opposition and the media.

The World Bank and its donors suspended direct budget support to the government, fearing that their aid money might be misused to support only ruling party members and divide society, what they termed “political capture” of development assistance. The suspension was temporary, though. Overall, between 2004 and 2008, annual aid spending doubled, to $3.3 billion.

But what the World Bank feared in 2005 has come to pass. It is notoriously difficult to speak openly in Ethiopia. In the villages where 85 percent of the population live, every five households are organized into a cell, whose leaders report on households to the village leaders. Visitors, conversations and political affiliation are all noted and evaluated when decisions are made about allocating seeds, fertilizers, micro-credit loans or participation in the food-for-work safety net program. Village officials also provide references for students and references for jobs and promotions for teachers and civil servants.

The bottom line is that if you step out of line, you risk not just social exclusion, but total deprivation, as Joseph did.

In 2009 Human Rights Watch interviewed over 200 people from over 50 villages in three regions of the country, many with stories like Joseph’s.

Publicly, the World Bank insists that development programs are helping large numbers of people and that there are mechanisms to monitor political manipulation of donor-supported programs. But privately they openly acknowledge that they have no way of knowing if their aid is distributed manipulatively and in fact they know there is discrimination and repression but are powerless to stop it.

The ruling party, which won over 99 percent of the seats in elections in 2008 and May 2010, locks up dissidents, intimidates journalists into leaving the country and has passed repressive laws that eviscerate civil society.

Donors are in a bind. They fear that if they push Ethiopia too hard, it may turn toward China’s no-strings money. But continuing to write checks in the face of Ethiopia’s increasing authoritarianism runs counter to donors’ own policies, which state that human rights are central to sustainable development.

Bank officials in Addis Ababa were eager in interviews to discuss the Chinese model and whether it is possible to have development without freedom. But the real question for donors, and for Western taxpayers, parliamentarians and governments, is whether development reserved only for those who support one political party is the kind of development they are happy to support.