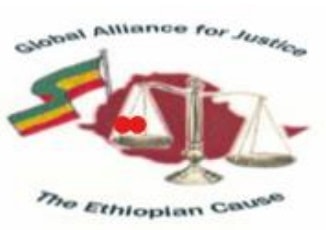 On November 27, 2020, pursuant to a unanimous decision by the Board, the Global Alliance for Justice: The Ethiopian Cause (GAJEC) appointed Lij Nebyat A Demessie as Deputy Chair. Lij Nebyat is an active member of the Ethiopian Diaspora. He joins GAJEC with an impressive and long-standing record in civic engagement.

On February 20, 2021, in commemoration of the 84th Anniversary of Ethiopian Martyrs’ Day, upon invitation and on behalf of GAJEC, Lij Nebyat presented to an audience comprised of GAJEC supporters within Italy. Lij Daniel Mesfin, who serves as the President of the Ethiopian Patriots Association within Ethiopia was also an invited guest among other esteemed members of the Diaspora. After hearing Lij Nebyat’s presentation on behalf of GAJEC, Ato Daniel, on behalf of the Ethiopian Patriots Association expressed interest in working with GAJEC towards achieving its goals. Those who missed the event or would like to watch it again can do so by clicking here: https://www.youtube.com/watch?v=sEy7TtTAsgQ

On February 27, 2021, in commemoration of Yekatit 12 or Ethiopian Martyrs Day, GAJEC organized a conference and panel discussion that was broadcasted live by Abbay Media. The conference was opened with a prayer and a brief speech by Abune Philipos from the Ethiopian Orthodox TewahidChurch, Lij Kidane Alemayehu and LIj Nebyat also presented on behalf of GAJEC. Our guest speakers consisted of Dr. Abebe Haregwoin, an avid reader of Ethiopian history, lecturer, and notable social media personality, Dr. Brook Hailu Beshah, former Deputy Ambassador to the US and Professor of Political Science and Ato Sofonias Kassahun an elected official in Italy and Founder of Black Post, the first ever Italian newspaper owned by a person of African descent. Dr. Ayele Bekerie also confirmed participation but was unable to join as he was out of the country. Those who missed the event or would like to watch it again can do so by clicking here:

Lij Nebyat A Demessie in a publicly televised conference organized by GAJEC demanded the posthumous revocation of any and all titles and investitures bestowed upon Graziani. To this end, an official demand letter will be sent to the Italian Government and Defense Forces as well as any other applicable nation states.

GAJEC Deputy Chair, Lij Nebyat A Demessie was interviewed amongst a distinguished panel comprised of notable personalities within the global Ethiopian community. Lij Nebyat represented GAJEC as Deputy Chair. Please make sure to tune in to the program which will be broadcast live on March 14, 2021 ዕሁድ፡-ከምሽቱ ሦስት ሰዓት የአማርኛ ዜና (voanews.com)

Lij Nebyat A Demessie, Deputy Chair of GAJEC, on March 13, 2021 was asked to moderate a major conference focusing on the ramifications of Western intervention in the current and ongoing crisis in Ethiopia.

GAJEC would like to take this opportunity to thank all support groups throughout the world including those in Italy and Ethiopia which commemorated Yekatit 12 Martyrs Days and/or the Ethiopian Victory at the Battle of Adwa. Please continue to keep us informed of any and all activities in pursuit of justice for the atrocities and war crimes committed against Ethiopia and Ethiopians from 1935-1941. It is important to remember that during this dark period, the massacre and genocide by the then Fascist Italian Government with the complicity and support of the Vatican led to the brutal death of over 1 Million Ethiopians including women and children, the destruction and demolition of over 2,000 churches, 525,000 homes and the death of over 14,000,000 livestock.

Since its inception in 2005, GAJEC has been relentlessly advocating to accomplish the following:

Please visit our website http://www.globalallianceforethiopia.net/ and make sure to sign our petition in order to help GAJEC accomplish its goals of ensuring justice is served to Ethiopia and the Ethiopian people. We are counting on your support to help us reach 100,000. Please see the link below to sign the petition https://www.gopetition.com/petitions/vatican-apology-for-ethiopian-holocaust.html

GAJEC publicly asks the Ethiopian Government to take firm action to achieve the call for justice required for the Ethiopian people with regard to the genocidal war crimes perpetrated by Fascist Italy with the Vatican’s Complicity.

GAJEC Asks for Reparations, an Apology from the Vatican and Restitution of Looted Properties

GAJEC publicly asks the Italian Government to pay fair and equitable remuneration to the Ethiopian people and to restitute looted properties in addition to demolish a mausoleum and public park built in ‘honor’ of the butcher Rodolfo Graziani . GAJEC also asks the Vatican to apologize for its support and complicity in the then Fascist Italy’s invasion of Ethiopia from 1935-1941. Please find a detailed report by Lij Kidane Alemayehu attached on the Vatican’s complicity of the then Fascist Government of Italy’s invasion of Ethiopia and genocide against Ethiopians. This well researched paper by Lij Kidane Alemayehy presents the factual basis on which GAJEC seeks an apology from the Vatican as well as the repatriation of looted Ethiopian properties which are currently on display in its library.

GAJEC publicly asks the UN to acknowledge the use of mustard gas, war crimes and genocide committed against Ethiopians and to include the Ethiopian Genocide in its Historical Genocide Records & Archives.

GAJEC’s struggle for the pursuit for justice for Ethiopia and her people will continue!