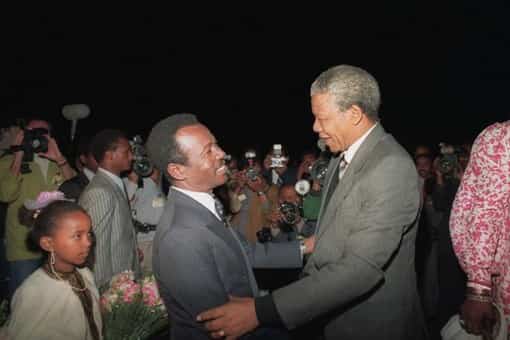 Mengistu was sentenced to death in 2008 in absentia after fleeing to Zimbabwe in 1991 following his ouster. He was charged with genocide, homicide, illegal imprisonment and property seizures.

Zimbabwe is being accused of refusing to extradite Mengistu.

He said Zimbabwe was “not harbouring Mr. Menguistu, we have allowed Mr. Mengistu to stay in Zimbabwe since he fell out with his people in Ethiopia. It was not a conspiracy, everybody knew he was coming here with his family.”

The discovery that a Rwandan national, Protais Mpiranya who was wanted for his alleged involvement in the 1994 genocide has been in Zimbabwe for years, before his death in 2006, seems to have reignited calls for Mengistu to be deported.

Now, Matsanga, a former Ugandan rebel group Lord’s Resistance Army spokesperson and a ZANU PF public relations consultant, thinks it would be a huge mistake for the southern African country to extradite Mengistu. In an article published first by ZBC News, Matsanga:

And the Zimbabwe Government must stand against this move that is likely to plunge both Zimbabwe and Ethiopia into the abyss and crevasse of regime change in Zimbabwe and another civil war in Ethiopia, which will be catastrophic to both countries that are yet to emerge from the dust and the ravages of sanctions.

To scratch and chafe old wounds will only bequeath pain, anguish and suffering to a country which is still struggling to recover from the wounds of a civil war created and supported by the same western nations.

And to borrow from Francis Imbuga’s “Betrayal in the City”- When the madness of an entire nation disturbs a solitary mind, it is not enough to say the man is mad. For over three decades, Zimbabwe did not extradite Mengistu, and it wasn’t out of madness, but keen consideration of the sequel of such a move.

That’s the leaf that we must borrow from. Mengistu helped in the liberation of Zimbabwe by supplying military equipment and the Western nations have not forgiven him and not they want to use backdoor diplomacy to do so.

He echoed the sentiments of Zimbabwe’s late former Information Minister, Tichaona Jokonya, who told VOA in 2009 that Mengistu fled to Zimbabwe not as a fugitive, but as a refugee.

Jokonya, back then, said the United Nations 1954 Geneva Convention protects refugees in the country they flee to.

Matsanga urged Zimbabwe to interrogate the sincerity of those pushing for Mengistu’s extradition, “is it being done in good faith? The answer is no, it is not.”

Matsanga claims former Ethiopian Prime Minister Hailemariam Desalegn who made unsuccessful attempts to have Mengistu extradited back to Ethiopia paid the latter a courtesy call in Harare after resigning as Prime Minister.

For him, it’s a sign that Desalegn was never serious about Mengistu’s deportation.