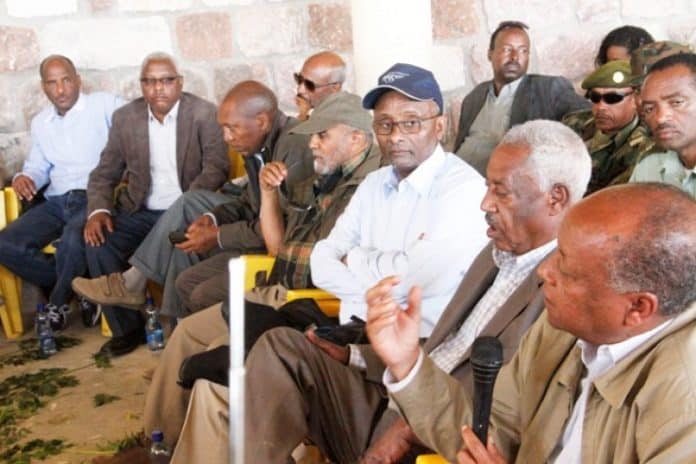 Tigray people Liberation Front (TPLF) has been committing genocides against humanity for forty years on a level comparable to that of a Nazi Germany’s massacre to Jews. Tigray People Liberation Front’s manifesto of 1968 clearly states extermination of Amhara ethnic people and an Orthodox Church. They began their fight with an extermination of, first the Welikite Amhara society who lives on the fertile farming land bordering with Tigay region. Tigray was a province then and they annihilated Wolkite for two reasons, first they needed a strategic route to Sudan to facilitate delivery of rebel’s weapons, and secondly, they target them of their ethnicity and fertile lands. The Wolkite society who survived extermination run away for their lives, and spread out worldwide from Australia to North America. During that time, the Dergue regime, the ruling elite of the country was unconsecrated, and people wanted a change. Then TPLF was the only organized force had an opportunity to control a government power with the help of mysteries backers. To clarify, TPLF did not win a war. Since, it was an organized force and people wanted to get rid of Dergue. TPLF had a coincidental circumstance to come to power, and that made TPLF builds its ego and felt an invincible. TPLF also allied with Ethiopian enemies just to mention some; Seid Bare who invaded east and south of the country. TPLF’s head office and financial supports had come from Cairo, Egypt. In fact, Oromo Liberation Front shares same route of strategic alliance with TPLF.

The world must know that Egypt is responsible for every crises and human suffering in the horn Africa. Egypt is responsible for assisting TPLF’s and OLF’s atrocities committed against humanity in Ethiopia. In 1991, as Dergue regime departed, Ethiopians were happy to see a change in a government hopping in assumption a democratic governance would be finally come in the country. And that was never happened, and TPLF to this very day is a known merciless terrorist organization lived through by killing. TPLF relentlessly kept exterminating Amhara all over the country with the help of OLF and other umbrella groups it has

organized for years. Similarly, hundreds, and thousands innocent civilians were murdered mercilessly in Ogaden (Somali region), and Gambela region and their bodies were dumped in mass graves. Every ethnics groups like Oromo, Afar, and southern people had been executed in similar fashion.

Allegation of sterilization and spread of HIV/AIDS infections among Ahmara population had been well circulated with then a head of Ministry of Health, now a man who runs the World Health Organization. He is a Central Committee of TPLF, and has no credential to run the WHO. The world Health organization should investigate, and would the allegation is true he should be charged for the crimes committed against humanity.

A recent terrorist acts by TPLF against military comp in Tigray region, the very soldieries stationed to keep the safety of its own were unforgivable, and it is not only a crime, it is an act of terrorism which is beyond the rule of a military engagements. This is heartbreaking, and the most savage acts against the very soldieries that were not only keeping their safety, but were engaged in humanitarian serves by collecting the farmers harvest and contributing to poor Tigray school kids with little money they had earned while TPLF and its children lives lavish lifestyle abroad and in the country.

Years ago when TPLF was on power, I wrote articles explaining Tigray Liberation Front is a Terrorist and Fascist organization. I am not to repeat in this article. However, I would like to summarize in a short sentence how TPLF has operated. 1. TPLF’s military wing including security apparatus runs terrorist activity against humanity, mass killings and imprisonment, silencing society with use of force and intimidations to prolong its rule.

Prime Minister Abey’s administration and the Ethiopian parliament is short in its statements only calling a “junta” to this organization. The fact the matter is TPLF is far more, and beyond just a “junta” and must be declared an international terrorist. The TPLF terrorist group and their families are living in North America and Europe must be brought to justices to the crimes they have committed against humanity. The diaspora, and friends of Ethiopia, and human rights advocates must work together with international communities to bring these criminals to justice. America is not a hideout place for criminals. Most criminals abuse a legal system to hide out in North America and Europe. The Prime Minster Abey and the Ethiopian parliament must declare, and reinstate TPLF is a Terrorist organization and must disband from any political and economic activities. The list of its members to the most top civilians and military officials, including their family members involved in criminal activity must face justices.