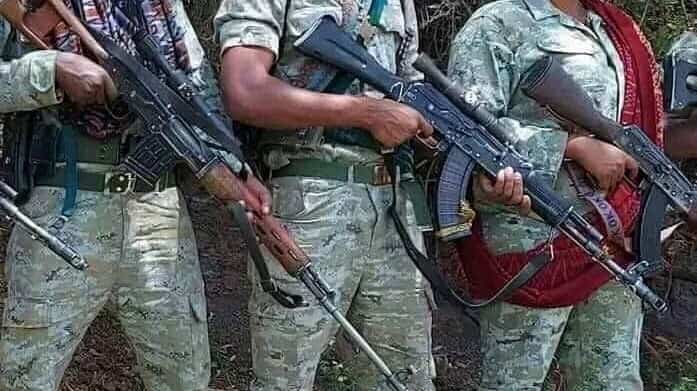 Addis Abeba – The Security Council of Amhara Regional State said it has reviewed the peace and security situation in the region and called on the security structure and the people of the region to stand ready to defend against military attacks by Tigrayan forces, whom the Council said have “declared a second war,” as we all as prevent the “rising prevalence of lawlessness, proliferation of illegal arms, organized and unorganized armed groups,” which the Council said were “threatening region’s peace and security and weakening the regional state.”

The Council said a direction has been put in place for the regional state’s security structure “at all levels” and called on “the youth, the rural and urban residents to join the region’s security in every step to maintain the peace and security and strengthen internal unity.”

“The TPLF has declared a second war”

The Council’s call came in the midst of unconfirmed reports of renewed clashes in areas in and around Western Tigray, which is currently under the Amhara region administration, as well as areas bordering Tigray and Eritrea, including Rama, located in central Zone of Tigray state. The reports are disputed by Tigrayan authorities. Getachew Reda, Advisor to the President of Tigray and TPLF Executive Committee member, denied the reports about ongoing military engagements with our forces” but said that “there have been several instances of indiscriminate shelling on civilians in parts of Tigray by Eritreans, of course.”

“…there have been several instances of indiscriminate shelling on civilians in parts of Tigray by Eritreans, of course.”

Earlier, a report by Wazema radio on 12 May quoted Tigray’s leader Debretsion Gebremichael as saying that the people of Tigray should prepare for the “final phase of the struggle”. Debretsion told attendees of town hall meetings in the region this week that efforts to resolve the crisis through diplomacy have failed. Subsequently, media owned and affiliated to the ruling Prosperity Party as well as regional and public media have have fielded reports of preparations for renewed attacks by Tigrayan forces.

The Amhara State Security Council said its has “reviewed the peace and security situation in the region” and said “the TPLF declared war on the Amhara region, inciting the people of Tigray to fight.”

Similarly, Colonel Demeke Zewdu, leader of the Welkait Identity Committee and who is currently in charge of Western Tigray after Amhara forces controlled the area in November 2020, called on all people in the region as well as the federal and regional governments to defend the area “against attacks” by Tigrayan forces whom he said were ready to launch military offensive on “Wolkait, Tegede”, a reference to Western Tigray. “There should be proportional readiness; the enemy has finalized its preparations and is on stand by, beating the war drum…that is what necessitated the Welkait Identity Committee to make this call,” Colonel Demeke said, adding “the issue should be given proper attention both by federal and regional governments, most importantly the people who should stand by the government.”

“There should be proportional readiness; the enemy has finalized its preparations and is on stand by…”

On prevalence of lawlessness and arms proliferation

Besides calling on the regional security structure all all level to be ready to defend against attacks by Tigrayan forces, the latest call by Amhara State Security Council discussed at length what it said were factors reinforcing “the weakening of law enforcement” as the “key issues highlighted in public discussions at all levels.” The Council said that recent public discussions pointed out “in detail the rising security threat posed by the growing number of organized and unorganized forces that are working to weaken Amhara’s internal unity and create a favorable environment for the enemy.”

“It has been concluded that these forces that are trying to weaken the internal unity of Amhara by dividing our people religiously, politically, and ethnically, could have lasting damage to the peace and security of our people and our region”, the Council said without mentioning names.

if these illegal activities both in urban and rural areas in the regional state cannot be rectified in a short period of time the region will “become a hotbed of lawlessness and disorder.”

Furthermore, the Council blamed the same forces for the prevalence of shortage of local products, promotion of illegal trade,the rising cost of living, smuggling goods, and plundering of public resources in the regional state which is also aggravating restriction the free movement of citizens and said that it was posing a “growing threat to the region’s security.” Moreover, “the proliferation of illegal weapons in various parts of the region is threatening the peace and security of the region.” It also decried that lives of innocent people were being lost by indiscriminate firing of weapons and ammunition both to test weapons and at public ceremonies including weddings and funerals.

The Council emphasized that “as illegality and lawlessness continue to prevail, the region’s development is being undermined by activities of those illegally armed, [who are] restricting the free movement of citizens, closing down investment opportunities, destroying job opportunities, hampering future development and challenging the development of the Amhara region as a whole.”

The Council also said that if these illegal activities both in urban and rural areas in the regional state cannot be rectified in a short period of time the region will “become a hotbed of lawlessness and disorder.” Added to the assessment of the Council is the possibility of security and humanitarian crisis if the people displaced by the war do not receive adequate food and return to their villages.

In this regard, the Council said the regional government accepted the issues of concern “raised by the people at various discussions” and believes “it has to ensure the peace and security of the people by enforcing the rule of law at all levels.” Therefore, a direction is outlined for regional security structures at all levels to maintain the peace and security of the region and to “reverse and prevent” the renewed attack by Tigrayan forces.