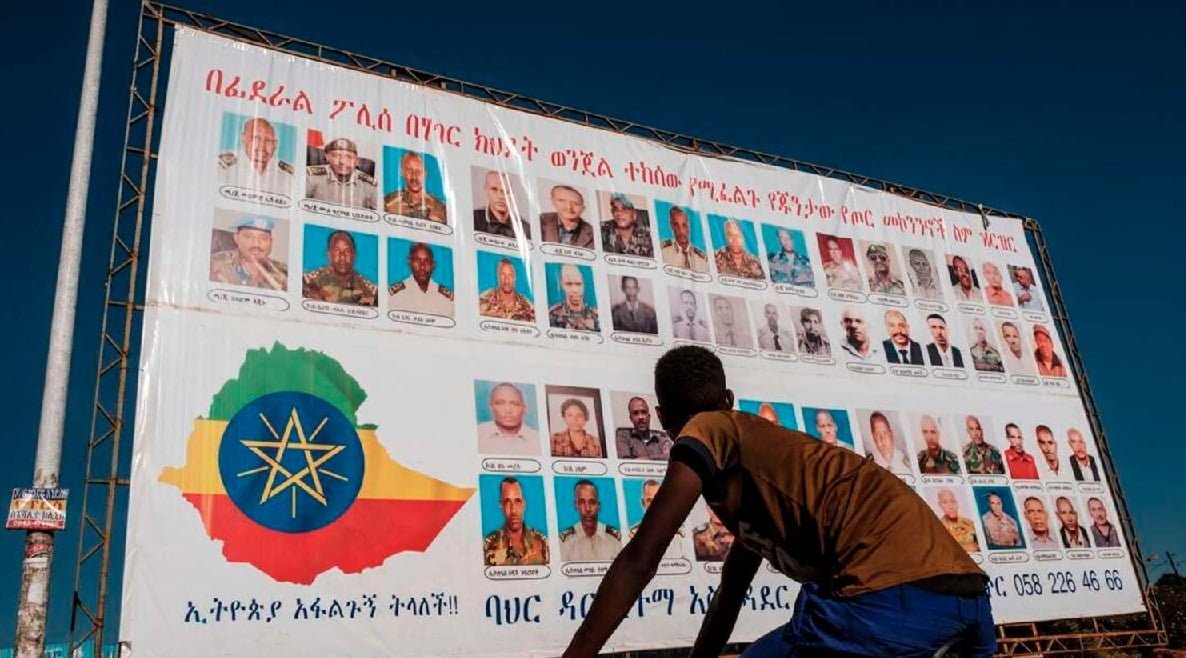 “The US and its allies haven’t even been able to get past the first step—UN Security Council censure—with regard to Syria, then Burundi, and now, Ethiopia.”

“War is essentially an evil thing. Its consequences are not confined to the belligerent states alone, but affect the whole world. To initiate a war of aggression, therefore, is not only an international crime; it is the supreme international crime differing only from other war crimes in that it contains within itself the accumulated evil of the whole.” -The International Military Tribunal  for Germany, 1946

Although the Nuremberg Trials were, like most international criminal tribunals, a victor’s court, that became the foundation of the United Nations Charter, which, above all, empowers the UN Security Council to organize a multilateral response to a war of aggression, also called a crime against peace, in which one nation attacks another. It’s a good foundation, far from fully realized, but a good foundation nevertheless.

The UN Security Council is also empowered to organize a multilateral response if all five of its permanent members agree to a determination that war crimes, crimes against humanity, and/or genocide are being committed within a nation.

Right now the UN Security Council is deadlocked on Venezuela, Syria, Palestine, and Ethiopia, and probably more, with the veto power of the US, UK, and France on one side and the veto power of Russia and China on the other, as it was during the Korean and Vietnam Wars. Many people complain that “the UN,” meaning the Security Council and the UN Charter, are therefore useless and ineffective, but deadlock is far better than domination by the US, as was the case during the 1990s, when the US had installed a drunken puppet, Boris Yeltsin, and turned Russia into a Wild West for domestic and foreign privatizers. It took some years for Russia to recover from the Yeltsin era and to reemerge as a world power.

Deadlock of course hasn’t prevented the US from unilaterally going to war in Iraq, Syria, Grenada, Panama, Nicaragua, and a long list of other sovereign nations since the Nuremberg Trials, the writing of the UN Charter, and its ratification by sovereign member states. However, the US keeps seeking the UNSC’s approval for its own wars of aggression, disguised as humanitarian intervention or War on Terror,  and Russia and China keep exercising their veto power to say no. And they now have backup from member nations now united in an alliance of 17 member nations, the “Groups of Friends in Defense of the Charter of the United Nations .”

“The US keeps seeking the UNSC’s approval for its own wars of aggression, disguised as humanitarian intervention or War on Terror.”

The first step towards military “intervention” in a domestic conflict is censure. It’s typically followed by sanctions, international criminal court indictments, and financial strangulation by the International Monetary Fund and World Bank.  The US and its allies haven’t even been able to get past that first step—censure—with regard to Syria, then Burundi, and now, Ethiopia. Russia and China have exercised their veto power in all three instances. That didn’t stop the US in Syria, but in that case Syria asked Russia, along with Iran and Hezbollah, to join them in a legal international defense coalition.

Russia and China repeatedly vetoed motions to censure Burundi in 2015 and then failed to rally an African Union intervention to overthrow then President Pierre Nkurunziza, despite the usual shrill barrage of Western media on human rights abuses and atrocities in that country. With the help of Russia and China’s vetoes on the Security Council, Burundi survived its David and Goliath battle with the US.

Tigray is in Ethiopia. It’s a state, province, region or however you translate it. An administrative region with a local government. So the Tigrayan People’s Liberation Front attack on a federal army base in the Tigrayan capital in Mekelle last November did not initiate a war of aggression as defined by international law. It initiated a civil war. However, it’s only rational to say that the initiation of a civil war also “contains within itself the accumulated evil of the whole.” That’s not to say that atrocities have not been committed by both sides or to diminish the suffering of Tigrayans or any Ethiopians in this conflict, but atrocities are typically committed by all sides in a war, including World War II, which began with Nazi Germany’s invasion of Poland. That is why the attack that starts a war of aggression or a civil war “contains within itself the accumulated evil of the whole.”

And that’s why Western officials and media, who would like to see their longtime TPLF puppets back in power, have tried so hard to blame Prime Minister Abiy Ahmed and the Ethiopian army. State and corporate imperialist media, and even Democracy Now, used phrasing like “an Ethiopian military offensive” and “the war began when Prime Minister Abiy Ahmed attacked Tigray, claiming that the Tigray People’s Liberation Front had attacked a federal army outpost,” as though the well-documented attack were nothing but Abiy’s claim.

Tigray also fired rockets at Asmara, the capital of Eritrea, and Eritrea responded by entering Tigray to defend itself and support the Ethiopian army.  Ethiopia, excepting Tigray, is now a close ally of Eritrea. International law professor Francis Boyle told me, “Eritrea had a right to defend itself against Tigray proportionately, and the TPLF keeps threatening to invade Eritrea to overthrow the government of President Isaias Afwerki.”

American imperialist mouthpieces, like Michael Rubin, champion this proposed war of aggression. He concludes his essay, “Could the Tigray Defense Force Invade Eritrea? ” with: “the choice is simple: March into Eritrea. Isaias may believe that he will die in Eritrea and that his son will continue his rule. The next steps in the Tigray conflict will likely prove him wrong on both counts.” The rest of his essay is of course an argument that Eritrea deserves this, without mention that Afwerki refuses to collaborate with AFRICOM, the US Africa Command, or indenture Eritreans to the World Bank and International Monetary Fund. Or that he has largely socialized property in Eritrea, Dr. Boyle told me.

Eritreans in diaspora are sharply divided on whether or not Isaias Afwerki has realized or betrayed socialist ideals, but either way the US has every reason to take his government down and they have nothing to do with humanitarian intervention. Ethiopian President Abiy Ahmed’s decision to make peace with Eritrea after decades of war and the two countries’ subsequent alliance represent more independence than the US empire has been willing to tolerate. But on the UN Security Council, Russia and China keep saying no even to censure, the first step toward intervention, leaving the US and its NATO allies only the option of naked, unilateral imperial aggression in defiance of international law.

Ann Garrison is a Black Agenda Report Contributing Editor based in the San Francisco Bay Area. In 2014, she received the Victoire Ingabire Umuhoza Democracy and Peace Prize  for promoting peace through her reporting on conflict in the African Great Lakes Region. She can be reached on Twitter @AnnGarrison  and at ann(at)anngarrison(dot)com.