Tullow Oil, Falcon Petroleum, Southwest Energy, Calvalley Petroleum Inc, Pexco Exploration, Africa Oil Corporation, Afar Exploration Company, Coastline Exploration, and Epsilon Energy Ltd, all share a common feature. They are all attracted to oil and gas potential opportunities in the Horn of Africa States. But they are not the only ones. There were also, at one time, AGIP, BP/Shell, Mobil and Sinclair and there were also Conoco, Elf, Texaco, Amoco and Chevron and Poly-GCL . There are other companies not so well known in the oil and gas sector but who take advantage of poorly managed states. These are intrepid adventurers, who may not have the resources or the technology to carry out oil and gas industrial exploitation requirements. But they take advantage of hungry politicians who want to make a dollar on the back of their own people. 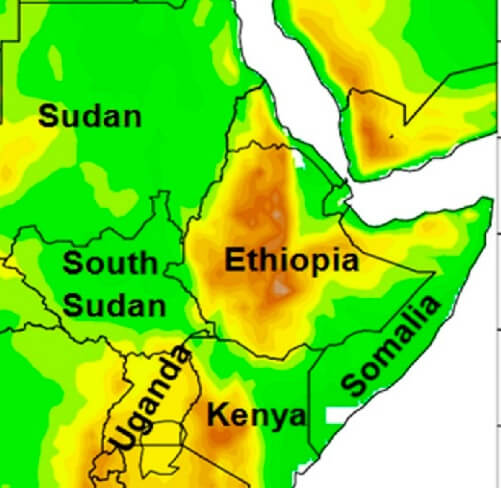 The region is not only in the news for the hunger and starvation and the scorch of NGOs, but it is also in the news for its potential oil and gas. Its geography and geology have put it in the map and cannot be avoided by the world of today. It was the case also of yester years but for other reasons. It was the crossing point of humankind to move out of the African continent to other parts. The region, they say, owns geological structures similar to those of the Arabian Peninsula.

Why the region has so far failed to exploit its potential oil and gas and other hydrocarbon reserves is unclear but unstable politics, superpower competition, nature of the man in the region as tough and uncompromising unlike many other regions of Africa and also Arabia, therefore, a higher bill to pay before arriving at steady growing profitability, could have been in the way.

Security is another dimension on the plate in the Horn of Africa. The countries of the region have been warring against each other or within each other as far back as the early twentieth century, when the Europeans showed up in the region and this, unlike, many other regions, has not settled yet. The dust is still flying around. It is, perhaps, why the oil industry failed. They were applying the same formula for all, as in other regions, failing to notice they could have changed that process, sometimes, for places like the Horn of Africa states, which ticks to another tune. They could have balanced the fiscal and geological infrastructures and the ground risks.

Assisting in the constitution of an integrated Horn of Africa States instead of segregating them from each other and asphyxiating them individually, has not worked. The chicken and egg debate has kept the region as, perhaps, one of the most unexplored regions for this industrially required energy source. The oil companies, and especially the giants, who came to the region and who still maintain concessions, some not operating because of force majeure factors, could handled the political governance landscape through an integrated infrastructure, instead of arming each separately. A collaborative region and at peace with itself and others would have been much better for both the region’s population and the pockets of the petroleum industry giants, and the smaller ones as well.

Ethnic/tribal based politics with power and wealth concentrated in the hands of a handful of politicians, who even take advantage of their own unsuspecting tribes or communities have been the pain of the region and it is, perhaps, time, the oil industry, instead of promoting or using those who are neither good for the region nor for its pockets, stopped supporting them or assisting them in their power acquisition process. The industry would be better off, if it helped in the integration process of the region, which potentially would be a giant profitable elephant field, in its own parlance.

International investors and oil companies always look for opportunities, but at times shrink from taking a different course to the general perceptions of people. It is taking risks which often makes the difference. It is, perhaps, time that instead of looking at individually organized states, they assisted in the formation of an integrated region, without swiping away the sovereignty of each state. This would be a better formula for exploiting the potentially rich geography and geology of the region.