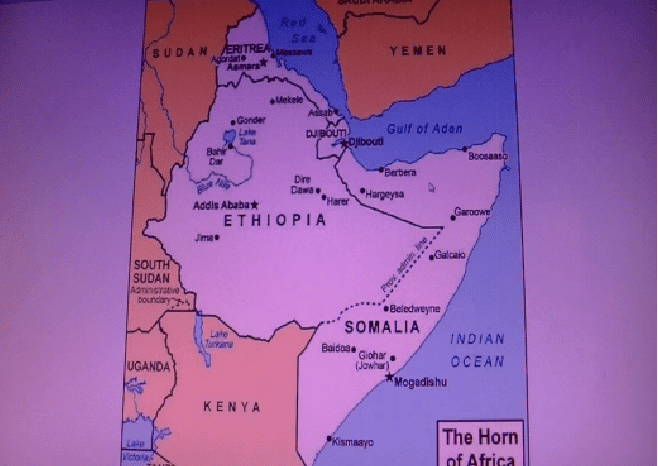 The Horn of Africa States is a region known for its major human wrenching problems such as famines and droughts, civil wars and warring countries and subsequent hunger, starvation and diseases and all the ills one would normally think of in this 21st century, where humanity seems to be working in reverse. Science and knowledge and the new discoveries of man should have been shaping better men and women, instead of the lying, scheming and terrible human of today. It would seem that as humans advance in knowledge and science, they are becoming more animalistic, more brutal and perhaps even possessively childish beings.

Despite the region’s marked problems, most of them man-made, it also possesses many assets which it was not able to capitalize on for some reason or another to avert many of the problems that beset it day and night – hunger, which leads to resentments and then infighting and then foreign interventions and all the problems we just cited in the afore para.

The Horn of Africa States consists of the SEED countries, an acronym for Somalia, Ethiopia, Eritrea and Djibouti. The region is sometimes referred to as the Northeast Africa and overlooks on the Africa side the main shipping lane of the Red Sea, Bab El Mandab, the Gulf of Aden and the Somali Sea (northern Indian Ocean). Many, simply call it the Somali Peninsula opposite the Arabian Peninsula. It is named the Horn for it is shaped like a rhinoceros horn, jutting out into the Somali Sea (northern Indian Ocean). The Horn of Africa States owns several main geographical features, but some of the most prominent of them are the Rift Valley, the Blue Nile Valley, The Danakil Depression, a large part of the Indian Ocean west coast, the Bab El Mandeb Choke point and a significant part of the Red Sea western coast. It owns many rivers which include among many others the Blue Nile, the Sobhat, the Shabelle, the Juba, the  Omo, the Baro, the Awash, the Tekeste, Angereb and the Merab and many smaller ones, some permanent and others seasonal. The region also owns lakes and swamps such as Lake Abaya, Lake Awasa, lake langano,  and Lake Abijatta and others.

The region is endowed with indigenous grains such as the teff which can easily feed millions of people and it has the ensette, another food plant native to the region in addition to native varieties of barley, wheat, sorghum, millet and many other plant foods such as grapes, grape fruits, bananas, mangoes, papaya, sesame, sunflower, chickpeas, beans, maize, sugarcane, cassava, different types of vegetables, coconuts, tomato and many others. The region also owns a large animal population, including the largest population of camels in the world, and millions of sheep and goats, cattle and chicken.

Like many other countries, the region suffers from the climatic changes that now affect food production, animal life, water and many other aspects of life. This is further complicated by civil strives that emanate from the competition for food, land and other sources of human survival, including armed competition on governance, terrorism and of course foreign interferences that impact negatively on life processes in the region. With a large potential of food production, the region, nevertheless, remains one of the hungriest in the world and food assistance from elsewhere is the norm rather than the exception, because of the aforementioned climatic changes, and continuous hardball competition on governance.

It is why there is need to turn the region’s political organizations into co-operating agents rather than sticking to creating more problems or staying with old short-sighted historical ones. The governance of the Horn of Africa States needs to create environments that allows the populations to produce their own foods, invest where they can and be able to travel within the region with ease. Why wouldn’t a resident of Addis Ababa be able to settle and fish on the coasts of the Indian Ocean or the Gulf of Aden or the Red Sea and similarly why shouldn’t a resident from Mogadishu be able to set up shop in Asmara or Addis Ababa or Dire Dawa or Harar or Djibouti and the same goes for every citizen in the region?

Food security can only be assured when the unnecessary travails involving false claims and fake nationalities are dropped, for the people of the region needs to live together and with each other. They did not have the choice to be there, but God has made them neighbors and neighbors are supposed to be helping each other and not fighting each other. Most of the problems were made in long gone times by past politicians, and of course colonial Europe, which need not be continued. It is high time the region proceeded to economically integrate but pragmatically so that gains are consolidated, and benefits reaped without reversing to old challenging times.

The region’s food production capacity is enormous in terms of agriculture, livestock, fish and other marine food, which would enable it not only to feed its growing population but also to export it and earn hard currency for the region. It can also contribute to other hungrier populations elsewhere. The only problem on the way is the internal issues of each of the four Horn of Africa States, where it seems the art of consensus and compromise, long the tradition of the region, has been forgotten or put aside because a foreigner has whispered into the ears of some, wrong messages deliberately intended to continue the havoc and chaos of old.

This is the twenty first century. One must know that the best way to live in peace with one’s neighbor is to befriend him and not antagonize him. Being friendly and helping each other solves many issues, for one gains an additional resource instead of a challenge. It is how the majority of the populations of the region want and leaders of the region must respect the wishes of the majority. Who would not want peace and who would not want to travel with ease throughout the length and breadth of this vast and beautiful region, where human life goes back to almost the beginning of humanity? One must not forget the beautiful African inspiring proverb:

“A clever king is the brother of peace”

It is how the region can produce its own food and be able to assure itself of its food security.