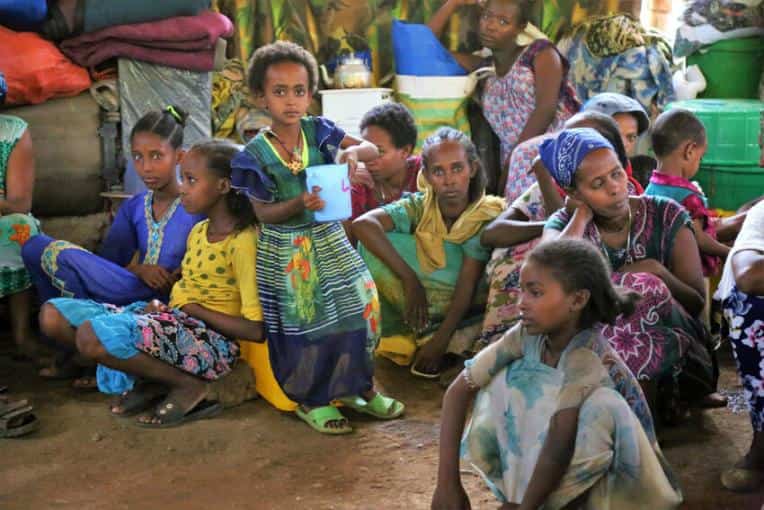 Ethiopia with more than 109 million people is the second-most populous country in Africa after Nigeria and has one of the fastest-growing economies in the world. The foundation of its economic growth is agriculture, which employs 80 percent of the population.

Ethiopia has achieved notable progress over the past decade, from economic growth averaging 10 percent per annum (2007-2017) to a reduction in extreme poverty and hunger rates by half (61 to 31 percent). The Government’s Ten-Year Perspective Plan (2021-2030) envisions Ethiopia as becoming a middle-income country. The plan and other national policies and strategies prioritize support to the agricultural sector to enhance food and nutrition security and build resilience.

Agriculture in Ethiopia contributes about 50% to the overall GDP, generates 90% of export earnings, and supplies about 70% of the country’s raw material to secondary activities. Thirteen million smallholder farming households account for 90% of total production. In Ethiopia on average, five to seven million people are chronically food insecure every year. Taking into consideration the extent of food insecurity in the country; the priority focus has been agriculture.

Dryland areas cover about 68% of the total land in the country about 35% of the country’s population. In these areas, rainfall is scarce, unreliable, and concentrated during a short rainy season with the remaining period tending to be relatively dry which adversely affects crop growth and development. The areas that were affected during mega drought periods in the country are all dry lands.

The national water policy and strategy provide the framework for addressing water supply and sanitation, irrigation, and hydropower development in the country. The food security strategy sets the scope and areas of intervention in helping chronically food insecure households to reach a level of food security necessary for an active and healthy life. These policies are implemented in ad decentralized governance and the key organizational structure includes federal, regional, and zonal district levels.

In recent years, Ethiopia has made development strides despite the regular cycle of droughts in parts of the country. However, poverty is still a big obstacle to overcome in Ethiopia. Nearly one-third of the population lives below the poverty line, and a vast majority depends on subsistence agriculture. Chronic and acute food insecurity is prevalent, especially among rural populations and smallholder farmers.

Ethiopia’s economy experienced strong, broad-based growth averaging 9.4% a year from 2010/11 to 2019/20, Ethiopia’s real gross domestic product (GDP) growth slowed down to 6.1% in 2019/20 due to COVID-19. Agriculture was not highly affected by the COVID-19 pandemic and its contribution to growth slightly improved in 2019/20 compared to the previous year. Private consumption and public investment explain demand-side growth, the latter assuming an increasingly important role.

Also read:  The Dawn of a New Era in the Horn of Africa

Across much of Ethiopia, 2021 assistance needs are at their highest levels since 2016 driven by numerous factors. First, an increase in conflict since late 2020 has resulted in displacement and widespread reductions in household access to food and income. Ethnic and political tensions have driven a sharp increase in conflict across the country, most notably in Tigray, Oromia, Amhara, and Benishangul Gumuz regions. The most extreme conflict has been in the Tigray region, where a major food security emergency persists, though conflict-related acute food insecurity also exists elsewhere in the country.

Second, significant early-season deficits during the March to May 2021 belg rainfall season, following a below-average October to December 2020, have reduced agricultural production potential across mostly belg-producing areas of the country.

Third, Ethiopia’s deteriorating macroeconomic conditions have resulted in higher food prices and reduced purchasing power. Combined, these drivers are resulting in reduced access to food for many poor households. Consequently, millions of people are unable to meet their basic food needs.

Due to the conflict in Tigray, farmers missed the harvest season, and with regional trade blocked, the local markets are close to collapsing. An estimated 5.7 million people are in urgent need of food assistance in the Tigray region as well as 1.7 million in the neighboring regions of Afar and Amhara.

In Tigray, where ongoing conflict is most extreme, poor households’ access to labor migration, cash crop sales, livestock sales, and agricultural activities has been significantly disrupted, which is especially important because these sources of cash income fund households’ food purchases at this time of year, when stocks from last year’s harvest are depleted. Alongside significant damage to health and water infrastructure, the reduction in household access to cash income has resulted in a widespread food security Emergency in the region and has likely led to even more severe consumption gaps for worst-affected households.

Ethiopia has made important development gains over the past two decades, reducing poverty and expanding investments in basic social services. However, food insecurity and under-nutrition still hinder economic growth. As per the 2021 Humanitarian Response Plan (HRP), an estimated 13.2 million people are food insecure.

Recurrent drought and failed harvests have left a negative legacy on many families, who have lost livestock and other productive assets. The Somali region remains the center of drought and has also been prone to flash floods.

Ethiopia is categorized as a high-risk country for humanitarian crises, ranking second in the International Crisis Group’s list of conflicts to monitor in 2021, and ranking 18th out of 191 countries when considering levels of exposure to hazards, vulnerability, and lack of coping capacity.

An estimated 23.8 million people have been identified to have a humanitarian need from this 53

% are children and 24% are women.  This includes  2.7  million  internally displaced, peoples

(IDPs), and 19.5 million people among the general non-displaced population. Risk analysis and corresponding projections of needs indicate that this number is expected to rise to 23.8 million.

Food security analysis for rural populations shows that about 13.7 million people are in crisis or worse condition from this 55 percent are projected to be children, 20 percent women, and 18 percent persons with a disability and they need urgent action to reduce food consumption gaps and to restore and protect livelihoods and also people in need of agriculture are about 13 million. The increasing frequency and magnitude of climatic shocks and pests over the recent years have left many rain-dependent farming and herding communities of Ethiopia particularly vulnerable to food insecurity.

Food-insecure people are among the conflict and climate-affected communities in the Southern parts of the country, households facing COVID-19 related food needs, and those communities affected by the desert locust infestation in Afar, Amhara, Oromia, Somali, and Tigray Regions. In addition, 3.64 million internally displaced people and returnees will likely face food consumption gaps across the country, with a particular focus on the Amhara, Oromia, Somali, and Tigray Regions.

A total of 8.8 million people are expected to need medical help. At-risk groups in affected communities have the greatest health requirements. Children under the age of five are the most vulnerable to severe acute malnutrition (SAM), which can lead to medical issues as well as malaria. This is prevalent in 70 percent of the country.

Lives are at risk due to a lack of food and water, as well as the potential of disease outbreaks; livelihoods have been lost due to the continuous violence, animal death, or poor health; and livelihoods are in jeopardy due to limited availability to seeds and other agricultural inputs for the coming year. Flooding, drought, and conflict-related displacement will result in a catastrophic shortage of food, shelter, and non-food necessities.

In general, Ethiopia’s humanitarian needs are driven by the ongoing conflict, desert locust invasion, recurrent environmental shocks such as floods and droughts, and the socioeconomic impact of COVID-19. Despite the political shift, armed conflict and community violence continue to be a major concern throughout Ethiopia.

Button, K., Covey-brandt, A., & Porter, A. (2014). ACHIEVING FOOD AND NUTRITION SECURITY Findings from the CARE Learning Tour to Ethiopia.

Food and Agriculture Organization of the United Nations. (2021). Food Security and Nutrition in the World Security, Improved Nutrition and Affordable Healthy Diets for All.

Foods That Keep You Awake at Night