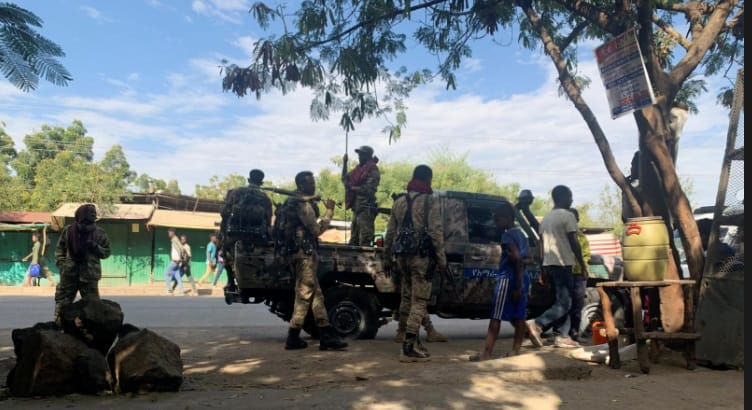 DANSHA, Ethiopia (Reuters) – An escalating conflict in Ethiopia’s restive Tigray region has killed hundreds of people, sources on the government side said, even as the prime minister sought on Monday to reassure the world his nation was not sliding into civil war.

The flare-up in the northern area bordering Eritrea and Sudan threatens to destabilise Africa’s second most populous nation, where ethnic conflict has already killed hundreds since Prime Minister Abiy Ahmed took over in 2018.

Reuters reporters travelling in Tigray and the neighbouring Amhara region saw trucks packed with armed militia and pickups with mounted machine-guns rushing to the front line in support of the federal government push.

Abiy, the continent’s youngest leader at 44, won a Nobel Peace Prize last year for democratic reforms and for making peace with Eritrea. But last week the prime minister, who is from Ethiopia’s largest ethnic group, the Oromo, launched a campaign against forces loyal to Tigrayan leaders whom he accused of attacking a military base in the town of Dansha.

“Concerns that Ethiopia will descend into chaos are unfounded and a result of not understanding our context deeply,” he tweeted on Monday. “Our rule of law operation is aimed at guaranteeing peace and stability.”

Abiy has said that government jets have been bombing arms depots and other targets. Aid workers and security sources have reported heavy fighting on the ground.

A military official in Amhara, on the side of the federal troops, told Reuters that clashes with Tigrayan forces in Kirakir had killed nearly 500 on the Tigrayan side.

Three security sources in Amhara working with federal troops said the Ethiopian army had also lost hundreds in the original battle in Dansha.

Reuters has been unable to verify numbers, though a diplomat also said hundreds were believed to have died.

The Tigray People’s Liberation Front (TPLF), which governs the region, is battle-hardened from both the 1998-2000 war with Eritrea and the guerrilla war to topple dictator Mengistu Haile Mariam in 1991. TPLF forces and militia allies number up to 250,000 men and possess significant hardware, experts say.

Tigrayans account for just 5% of Ethiopians but had, before Abiy’s rule, dominated politics since rebels from their ethnic group toppled Marxist military rule in 1991.

They say Abiy’s government has unfairly targeted them as part of a crackdown on past rights abuses and corruption.

“These fascists have demonstrated they will show no mercy in destroying Tigrayans by launching more than 10 air strike attempts in Tigrayan cities,” the TPLF said via Facebook.

Billene Seyoum, spokeswoman for the prime minister’s office, said she was not authorised to comment in response to statements by the TPLF, and that information on the military campaign needed to be corroborated with the Ethiopian army.

The army said it was intensifying attacks and that large numbers of Tigrayan special forces and militia were surrendering. It denied a TPLF claim of downing a jet.

The army spokesman did not respond to phone calls seeking further comment.

Journalists including from Reuters were turned away from the Dansha base on Monday by soldiers citing safety concerns.

Outside the base, SUVs and pickups were filled with soldiers and a black metal sign read: “Let’s build one democratic country together.” Military helicopters flew northward.

On a road into Dansha from the neighbouring Amhara region – which supports the federal government – huts in a string of villages appeared abandoned.

In some parts, men in plain clothes with AK-47 assault rifles stood guard.

A senior diplomat working on the Ethiopia crisis said Abiy had increasingly fallen back on support from Amhara – raising the risk of more ethnic violence – after parts of the military’s Northern Command went over to Tigrayan control.

“Ethiopia is like an empire crumbling before our own eyes,” the diplomat told Reuters.

Will Davison, senior analyst at the International Crisis Group thinktank, said the TPLF might be capable of a strong counter-offensive. “The path to making the Tigrayan leadership surrender appears arduous,” he said.

Amid growing international concern, the TPLF has sought mediation by the African Union, according to a letter seen by Reuters. The United Nations wants Abiy – a former soldier who fought alongside Tigrayans against Eritrea – to start dialogue.

One diplomat told Reuters Abiy had already rebuffed calls for calm from the regional African group IGAD over the weekend. “He is about to take the country to a very dangerous situation. He is not listening to anyone,” the diplomat said, speaking on condition of anonymity.

The prime minister’s office did not immediately reply on Monday evening to a request for comment on the diplomat’s remarks.

There are fears of reprisals against Tigrayans elsewhere, with 162 people including a journalist arrested in Ethiopia’s capital Addis Ababa on suspicion of supporting Tigrayan forces.

All-out war would damage the economy after years of steady growth in the nation of 110 million people. It could also add to the hundreds of thousands displaced in the last two years.

But analysts do not believe the clashes will reawaken the conflict with Eritrea given that President Isaias Afwerki and Abiy both see the Tigrayan leadership as enemies.