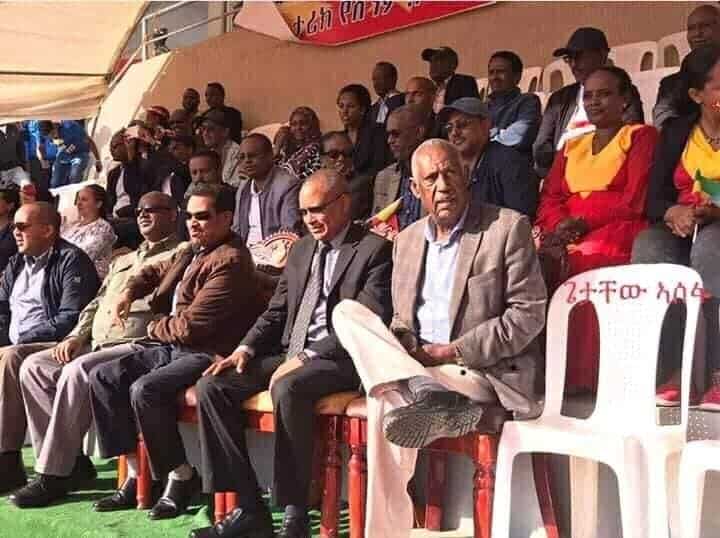 EADERS of Ethiopia’s northern Tigray region appealed to the African Union to intervene to stop the country spiralling into a deadly civil war today after Prime Minister Abiy Ahmed replaced his top officials.

Tigray President Debretsion Gebremichael, who also chairs the region’s ruling Tigray People’s Liberation Front (TPLF), said in a televised address that his people would continue to defend themselves and urged the federal government to negotiate.

His call came after troops were mobilised to the region from the capital Addis Ababa, with dozens killed in air strikes as the stand-off between Tigray and the national government escalated.

The region has been sealed off, with aid unable to reach its people and communications severed.

According to the United Nations, fighting has broken out in at least eight separate locations, with as many as nine million people at high risk of displacement.

Army officials claimed today that at least 500 TPLF fighters had been killed in Kirakir, near the border between Tigray and the Amhara region.

Abiy referred to the military offensive as “a law enforcement operation” and dismissed UN appeals to enter peace talks.

He played down fears that the country would descend into civil war, saying: “Ethiopia is grateful for friends expressing their concern. Our rule-of-law operation is aimed at guaranteeing peace and stability.

“Concerns that Ethiopia will descend into chaos are unfounded and a result of not understanding our context deeply.”

No reason was given for the reshuffle, but the trio are known to be Abiy loyalists and critics warned that it indicates a direction of travel away from a peaceful settlement to the conflict.

Tensions escalated after Tigray defied the government and held elections in September that were deemed illegal, with federal legislators demanding that funding be cut to Tigray’s regional parliament.

Abiy, who was awarded the Nobel Peace Prize last year for ending his country’s decades-long war with neighbouring Eritrea, has been accused of discrimination against Tigrayan officials, many of whom have been sacked from top government positions.