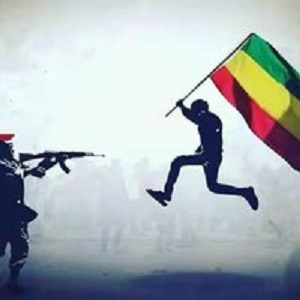 In a recent panel discussion held recently in Addis Ababa, one of the most prominent scholars in horn of African intergovernmental and intragovernmental relations, Professor Medhanie Taddesse, recommended loosening the federal system in Ethiopia as a way out of the predicament the country is in. He declared it as the only way to save Ethiopia as a country. I cannot agree more. As many scholars in Ethiopian politics explain, Ethiopian politics has been a field of competition between the centrifugal forces at the periphery and the centripetal forces at the center.

Since the formation of modern Ethiopia, the central forces have been trying to create a homogeneous Ethiopia along the cultural and political lines of the Amhara nation. Many prominent Amhara scholars and community leaders like Professor Mesfin Woldemariam and Professor Asrat Woldeyes have been arguing that Amhara is not an Ethnic group but rather an idea of forming an assimilated homogeneous nation called Ethiopia. Anyone who accepts the Judo Christian culture and speaks the Amharic language is Amhara regardless of the individual’s ethnicity declares one of the top proponents of this thought, Nebure’ed Ermias Kebede in his Amharic book titled “Ethiopia Ye’Alemu mefareja”. He argues that the terms “Amhara” and “Ethiopia” are synonymous and that if one is Ethiopian then he/she is Amhara.

But it is not only the Amhara elite who tried to create an assimilated homogeneous nation. There were other efforts to replace the Amhara in the domination. Notable among those are, the conquest of Ahmed Ibrahim Ebn Al Ghazi A.K.A. Giragn Ahmed to form an Islamic caliphate all over Ethiopia in the 16th century and the expansion of the Oromo in the 17th century. All these futile efforts to form a unified homogenous nation have costed a lot.

There is no need to spend words to show that the effort of the central forces to create an assimilated homogeneous Ethiopia has failed.  While many ethnic groups like Gafat, Yifat, Timuga and Bulga have been assimilated and swallowed under the Amhara Judo Christian culture, most of the larger ethnic groups like Oromo, Tigray, Somali, Sidama, Wolaita and so on remain intact.

In modern Ethiopia, the centrifugal forces in the periphery have been fighting for self determination of the nations they represent. Most notable among the peripheral forces are the Tigray People’s Libration Front (TPLF), Oromo Libration Front (OLF) and Ogaden National Libration Front (ONLF). These forces paid a lot of sacrifice to defend preservation of their nations against domination by the central forces. They were able to topple the unitary government in 1991 and formed a federation divided along ethnic lines (nations and nationalities). Even though the new constitution of the federation gave right to nations and nationalities the right to self-govern, the fact on the ground was that the central government led by EPRDF had a structural control over all the states. This situation rendered Ethiopia to be a dwarf empire that is neither a fully unified empire nor a federation of nation states. Neither the member nations have become self-governing states, nor the central government was able to unify all the peoples as one nation.

If Ethiopia is to survive as a country, both the central and peripheral forces need to face the reality and find a middle ground that can accommodate both the need of nations to self-govern and the need of the central forces to keep the country together. PM Abiy’s effort to appeal the central forces with rhetorical promises of unifying the country as one nation while in fact the peripheral forces are gaining momentum is a dangerous slippery slope. His promise of a unified nation is just a myth. Ethiopia as a country has passed the tipping point towards becoming federation of nation states and there is no possibility of returning to a unified homogenous nation.

The central forces need to accept this reality and prepare themselves to engage in a federation of nation states. But at the same time the peripheral forces need to face the reality that seceding from a country and forming a new country would not guarantee lasting peace and that there is little possibility of such a phenomenon in today’s international politics.

One key issue that needs to be addressed in this situation is the fate of the ethnic Ethiopians. These are citizens of the country who are not able to or do not want to identify themselves along ethnic lines (nations and nationalities). With most of the elite of the Amhara finally joining the peripheral category, the only remaining central force is the ethnic Ethiopians which include the vast majority of the population of urban central Ethiopia like Addisababa, Nazret/Adama, Diredawa and other major cities. The federation will need to device a way to accommodate the right of the ethnic Ethiopians. Specifically, Addisababa should be allowed to be the state of the Ethnic Ethiopians.

With the recent change with in EPRDF, and its fragmentation, the peripheral forces are gaining more muscle in the regions they control and the peoples’ nationalism along ethnic lines is getting stronger. At the same time the central federal government’s control over the regional states is waning. So, the only viable option is to help each nation in Ethiopia become a state and make Ethiopia a federation of nation states. That was the intent of the constitution from the get-go.

With a friend like America, does Ethiopia need enemies?