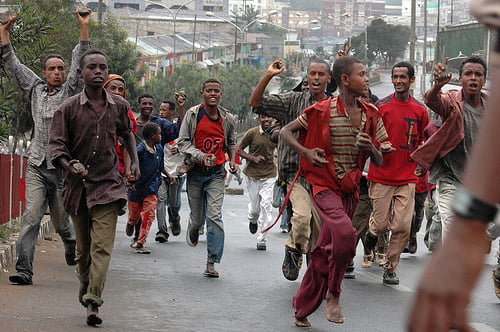 Students at Addis Ababa University campuses had defied a government ban against demonstrations, holding the first public protest against how legislative elections on May 15 were conducted. The police charged into crowds to grab protesters, beating some with riot sticks.

Demonstrations have been banned since election day, when the capital police were put under the control of Prime Minister Meles Zenawi. Mr. Meles’s party retained control of Parliament, according to official election results that have not yet been ratified, but opposition parties contended that there was widespread election fraud.

In a statement read over state television and radio, the federal police did not give details about the death or injuries.

Pictures taken by an Associated Press photographer and others showed officers hitting students with the butts of assault rifles, and bloodstains on the ground.

An Associated Press photographer and a reporter were also roughed up and detained for seven hours after the protests. They were given no explanation for their detention, but the police seized the photographer’s electronic film, and he was ordered to return in three days.

The army’s special forces troops stood by in the capital, armed with assault rifles and rocket-propelled grenades. Riot police with tear gas and a water cannon also stood ready as regular police officers quelled the demonstration.

The police detained an estimated 500 protesters here and arrested between 200 and 300 others who were trying to keep students from entering the university, said Minister of Information Bereket Simon, who is also spokesman for the governing Ethiopia People’s Revolutionary Front.

Clashes spread to other city campuses later Monday, and the police fired tear gas at students at a teacher’s college.

Mr. Bereket said the main opposition group, the Coalition for Unity and Democracy, was behind the protests.

Berhanu Nega, vice chairman of the Coalition for Unity and Democracy, denied the charges, saying the group had urged students to hold off protests.

“Our worry is that the ruling party will use these protests as an excuse to crack down and resort to force,” he said.

The party was getting reports that protests also occurred in Awassa, in southern Ethiopia, and Gonder, in the north, he said.

Ethiopia’s political parties are challenging the results of 55 percent of the races, Kemal Bedri, the elections chief, said Monday.

Mr. Kemal said investigations would determine whether it was necessary to hold a repeat vote for the 299 disputed seats before July 8, when full, ratified results are expected to be released.

Provisional results show the ruling party with victories for 302 seats, with 26 more for its allies, in the 547-seat lower house of Parliament.

Those who have made accusations of electoral fraud contend that gunmen intimidated voters, people were forced to vote for certain parties, ballot boxes were stuffed or disappeared, and the number of ballots in some constituencies exceeded the number of registered voters.