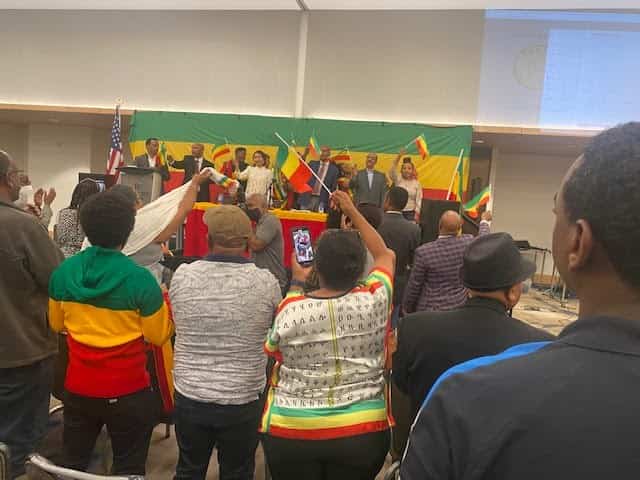 A dire situation is getting worse

Ethiopia is nearing a tipping point. The deteriorating human rights situation, jailing and persecution of journalists, and ethnically based attacks have created conditions similar other countries that have suffered unexpected sudden, violent upheavals. While some in the west cling to the image of a ruler who was awarded a Nobel Prize for peace, the reality is that Abiy is running a repressive, violent regime. He is doing nothing to counter rampant, widespread corruption or to turn around heartbreaking poverty and bleak economic prospects. The government has targeted and alienated the Amhara population, antagonized Ethiopia’s neighbors, and launched a war on civil society.

Ethiopian-Americans are calling for the establishment of a All-Ethiopian People’s Conference with civil organizations, religious organizations, political parties, women’s rights organizations and organizations representing young people to draft a new constitution and create a transitional government.

The human rights situation in Ethiopia continues to deteriorate. Killings, church burnings and involuntary displacements of entire communities are occurring, and the government is doing little or nothing to assert the rule of law. Individuals who are guilty of nothing beyond attempting to exercise their political rights have been arrested and continue to be detained. The international community, including the U.S. Congress and State Department, are aware of the situation and have done nothing beyond making vague statements. The Ethiopian government is conscious of its reputation, and it may respond in some fashion to criticism and if there were strong calls for action from the U.S. and European governments or international bodies.

So many tragedies are competing for attention and compassion and Ethiopia’s troubles seem far away for Americans – except those who come from and continue to feel ties to Ethiopia. While the world focused on the unfortunate tragedy of Texas massacre, and the tragedy in Ukraine, over 800 Ethiopian-Americans attended a Town Hall meeting in Washington, DC on May 22. The event was organized by Balderas for True Democracy in Ethiopia. Its chairman, Eskinder Nega, made a rousing speech, warning Ethiopians that must organize peacefully to alleviate the suffering of the Amhara people. He said the human rights situation is getting worse, and something must be done to stop the violence and repression before it is too late. He denounced the Abiy government’s detention of over 5,000 Ethiopians of Amhara orgin, including members of the Fano, patriots, journalists, professors and peaceful activists. Even a five year-old boy was arrested and jailed. The Abiy government has not made any attempts to hold the perpetrators of massacres of Amhara people accountable for their actions, nor has it acted against the OLF/Shenne group, which has committed atrocities and destroyed property in Wollega province. The TPLF has committed atrocities with impunity in the Afar region, including killing innocent civilians and destroying hospitals, schools, mosques, and churches.

Attacks on the press and ethnically motivated persecution of Amhara

Reuters reported that authorities in Ethiopia’s northern Amhara region have arrested four employees of a U.S.-based online media outlet, while the whereabouts of two others was unclear, the outlet said on Sunday, in the latest round of arrests involving media.

The arrests would add to those of five journalists in another Amhara media outlet on Thursday over what their colleague said was the outlet’s reporting of the activity of a local volunteer militia, known as Fano.

Legislation filed in the U.S. House of Representatives this year seeks to bar foreign aid for government entities that the U.S. government determines to have egregiously violated journalists’ human rights, and to require sanctions on individuals who participate in such acts.

In a recent letter to Prime Minister Abiy Ahmed, Senators Cardin, Murphy and Leahy, wrote: “With this spate of arrests of journalists and return to using the anti-terrorism law against the free press, Ethiopia risks a reversion to its undemocratic past. Press freedom is a hallmark of democracy, and journalists must be allowed to report the news in the public interest without fear of harassment or harm. We urge you to immediately and unconditionally release all journalists in detention in Ethiopia, to refrain from abusing the legal process to retaliate against journalists, and to ensure the free flow of information in all of Ethiopia.”

The Ethiopian government has lost the ability to ensure the most basic rights to its citizens: protection from targeted violence, killings and rapes; freedom from arbitrary arrest; and the ability to communicate be informed.

Ethiopia’s state-appointed human rights body called on Friday for the release of 16 journalists and media personnel after new arrests in recent days in the capital Addis Ababa and the restive region of Amhara.

Balderas leaders and victims of abuses perpetrated by the Ethiopian government testified at a recent UN meeting about genocide and human rights violations. The president of Balderas, Eskinder Nega, the human rights Advocate Ms.Tsigereda Mulugeta, Dr. Yohannes G. Meskel and Stephen Borner conducted a successful conference on the issue of genocide on innocent Amharas in Oromia region and the issue of IDP and humanitarian crisis, and the overall dire situation in Ethiopia with the United Nations officials in New York.