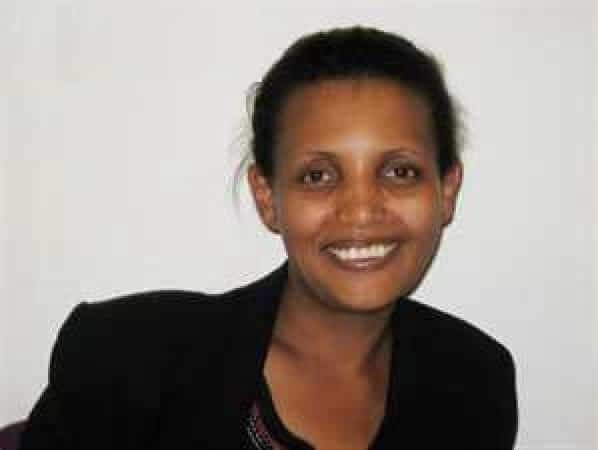 Birtukan Mideksa (also spelled Birtukan Midekssa; born 1975) is an Ethiopian politician and former judge. She is the leader of the opposition Unity for Democracy and Justice (UDJ) party.
Contents

Birtukan Mideksa was born in Addis Ababa, the capital city of Ethiopia. Birtukan went to Yekatit 12 secondary school (aka Etege Menen) and upon graduating from high school she joined Addis Ababa University where she graduated from Law School with a Bachelors Degree in Law. She practiced law at the 3rd district of the federal judiciary.

While she was working for the federal judiciary, Birtukan was appointed to be a judge at the 3rd district court of the federal first instant court. During that time, she presided over a high profile case of the former defense minister and top ranking official of TPLF, Siye Abraha who was accused of corruption. She set the defendant free on bail, and was surprised minutes later when government authorities arrested Siye while he was walking out of the court accompanied by his family and friends.
Politics

Later, Birtukan decided to join a political party to help bring change, including superiority of the rule of law, and a full respect and implementation of the constitution. She joined the Rainbow Ethiopia: Movement for Democracy and Social Justice party and later Coalition for Unity and Democracy (CUD) after a coalition of four parties. After election or 2005, her party won over a third of the seats and believed they would have won more if not for voting and counting irregularities, and the governing party started to round up opposition party leaders (including Birtukan). Birtukan was convicted of attempting to overthrow the constitutional order and sentenced to life in prison. She was pardoned in 2007 after lengthy negotiations and after she, as well as other leaders of the opposition spent 18 months in prison.

She later founded UDJ (Unity for Democracy and Justice) with the same principles followed by CUD. The need for having the new party name came from the fact that the ruling party’s election commission awarded to a splinter group from CUD (aka Kinijit). Birtukan was elected to be a chairperson of the UDJ, which has the goal of bringing about change in Ethiopia by peaceful means.

On December 28, 2008, Birtukan was re-arrested and imprisoned to serve a life sentence, after the pardon granted to her in 2007 was revoked. Birtukan Medeksa was among more than 100 people jailed for offences after controversial polls in 2005. A dispute over the terms caused her re-arrest. The Ethiopian government claimed that her pardon was conditional on “an apology for her crimes”. It said it ordered her re-arrest over reports that she had publicly denied having apologized for her actions or asking for a pardon, and that she would now be imprisoned for life. Birtukan openly admitted to continue her “peaceful struggle for more democracy, respect for human rights and the rule of law” in Ethiopia. Her problems started when she spoke to journalists abroad about the way opposition leaders were released. She mentioned negotiations which had taken place between the opposition and government, with the help of “a panel of elders”, before their pardon was finally granted. The government laid emphasis on a document signed by the prisoners to be released, “regretting” any “mistakes” they had “committed”, implying that the release was part of a normal judicial process, rather than part of a negotiated political deal.

Merera Gudina, leader of the opposition coalition Forum for Democratic Dialogue (FDD – Medrek), stated to an audience during a visit to the United States in November 2009, “Birtukan Medeksa is going to be the Mandela of Ethiopia”. Many of her supporters refer to her as Ethiopia’s Aung San Suu Kyi, the Burmese prisoner of conscience

In December 2009 Amnesty International categorized Birtukan Mideksa’s imprisonment as “unjust and politically motivated”. It launched an international campaign demanding her release, challenging the Ethiopian government’s claim that her incarceration was a legal matter. When asked about her release at a December 2009 news conference, Ethiopian Prime Minister Meles Zenawi, who rarely refers to her by name, replied, “There will never be an agreement with anybody to release Birtukan,” he said. “Ever. Full stop. That’s a dead issue.”

On October 6, 2010, Birtukan was released from prison. According to government spokesman Shimeles Kemal, Birtukan submitted a pardon plea in October 2010, while the justice ministry quoted a statement in which she expressed regret for denying her 2007 pardon. The United Kingdom’s Minister for Africa, Henry Bellingham, welcomed her release, stating “This is an important step forward. We have always taken the view that her re-imprisonment was not in Ethiopia’s interest and a solution should be found … for her to be released.” Amnesty International maintained that Birtukan had been a prisoner of conscience, stating that “she was imprisoned solely for the peaceful exercise of her right to freedom of expression and association.”
Recognition

In 2011, Birtukan was awarded the Reagan-Fascell Democracy Fellowship of the U.S. National Endowment for Democracy, giving her five months in Washington, D.C. to “study the principles of democracy.”