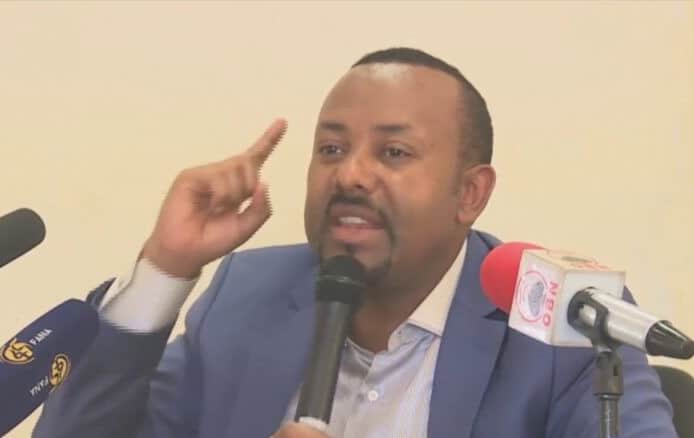 Abiy Ahmed has fooled almost all of us Ethiopians for some time.  He managed to do so only because TPLF has been denigrating the name Ethiopia so much so that we were longing that someone in a position of power say something good about Ethiopia, even a as a lip service.  In essence, we were begging to be lied to about the Ethiopia we love.  The shrewd Abiy Ahmed knew this weakness of ours very well and exploited it to the fullest extent, so much so that some Ethiopians regarded him as the messiah Ethiopia and Ethiopians have been longing for (for a long, long time).

However, what the street smart Abiy Ahmed did not realize was that he cannot fool all of us Ethiopians all the time.   After all, his treachery could take him only up to a certain point.  Abiy Ahmed is too street smart for his own good.

Though Abiy Ahmed’s anti-Ethiopian wickedness has been exposed by countless irrefutable facts, some Ethiopians seem to choose to be fooled by him all the time, burying their heads in the sand.  They do not seem to see (rather, they seem to choose not to see) the obvious fact that Abiy Ahmed’s words are diametrically opposite to his deeds.  They completely ignore Abiy Ahmed’s anti-Ethiopia barbaric actions, focus only on his empty praise of Ethiopia, and, based on his empty praise only, they call him Ethiopia’s redeemer.  They give deaf ears to anyone and everyone trying to explain to them that if Abiy Ahmed is indeed a redeemer, he is redeeming not Ethiopia but Oromia.   They fail to realize that, in just three years since he assumed power, what Abiy Ahmed has done for Oromuma (using his unparalleled treachery expertise) is way more than what Oromo extremists would have dreamed of doing in hundreds of years.

No wonder most Ethiopian evangelical leaders are fanatic Oromo nationalists.  As such, they fully support Abiy Ahmed not because they are fooled by him, but because they share a common agenda with him.   The rest of the evangelical flock is fully behind Abiy Ahmed only because it is shaped by continual preaching to have herd mentality.  Since the flock is made to see its leaders as infallible prophets( fearing condemnation by its prophetic leaders and ostracization by its fellow believers) each and every member of the flock supports what its leaders tell it to support, and objects what its leaders tell it to object, without asking any question whatsoever.

For the leaders of Ethiopian evangelicals (represented by swindlers like Eyu Chufa, Israel Dansa, and Yonatan Aklilu), evangelism is not a goal but a means to goal.  The goal is robbing gullible Ethiopians of all their hard-earned wealth, after intoxicating them with what seems to them logically persuasive preaching, only because they are not allowed to interrupt its flow by asking questions.  For these leaders of Ethiopian evangelicals, anyone and everyone who directly or indirectly endorses their goal is sure to get their full endorsement, regardless of who that person is or why he endorses their goal.   If that person happens to be the prime minister of Ethiopia, so much the better.   This is why, every time Abiy Ahmed seems to stagger, Eyou Chufa and other evangelical leaders rush communique after communique to prop him up.

Since the main goal of the leaders of Ethiopian evangelicals is to milk their trusting (tamed by endless preaching) evangelical cows until they cannot be milked any more, they will readily do whatever they have to do to increase the number of their evangelical milk cows.  In this regard, the astute leaders of Ethiopian evangelicals found the Ethiopian Orthodox Tewahido Church (EOTC) to be an easy target for their huge expansion by massive conversion.  There are a multitude of reasons why EOTC became an easy target for evangelical expansionists.  The following three are few of the main ones.

Beset by these and other problems, EOTC is indeed an easy prey for Evangelical vultures.   Therefore,  one would not wonder if the leaders of Ethiopian evangelicals had planned to build the head quarter of their enterprise (for swindling innocent evangelicals in the name of Jesus) in Addis Ababa over the rubble of the patriarchate and St. Mary (Kidiste Mariam) church.  Compounding EOTC’s problem, the current prime minister of Ethiopia (Abiy Ahmed) is also preying on her to eat her alive.  Thus, Abiy Ahmed and the leaders of Ethiopian Evangelicals are coupled by their common enmity to EOTC.  However, their coupling is odd.

Ethiopian evangelical leaders know full well that Abiy Ahmed would rather celebrate “Erecha” than Pentecost, that is he is better described as a “Wakefeta” than as an evangelical.   Moreover, these evangelical leaders also know that Abiy Ahmed is committed to dismantling EOTC, not because he prefers Evangelical doctrine over EOTC doctrine, but only because he can build his Oromo Empire only if he can break up Ethiopia, and he can break up Ethiopia only if he can knock down EOTC.

Ethiopian evangelical leaders know that Abiy Ahmed is directly or indirectly responsible for all ethnic based crimes committed during his reign (in particular, for the barbaric slaughter of tens of thousands of Amaras by Oromo extremists). They also know that (since the majority of evangelicals are most probably Amaras), a large number of Abiy Ahmed’s ethnic cleansing victims should be Amhara evangelicals.

All of these do not in the slightest way affect Ethiopian evangelical leaders unwavering support for Abi Ahmed.  As stated earlier, the main objective of evangelical leaders is the end of EOTC as a viable religious institution (so that they can completely subjugate and totally exploit Ethiopian Christian population without any meaningful opposition).  Therefore, regarding Abiy Ahmed, what matters most to these evangelical leaders is whether or not he continues his ferocious assault on EOTC.  As long as he keeps attacking EOTC ferociously, they will keep supporting him ferociously, even if he keeps intensifying his horrifying ethnic-based crimes on Amaras and other non-Oromo Ethiopians.

Indeed, the leaders of Ethiopian evangelicals (who claim to be ardent followers of Jesus) are hypocrites who do not follow the golden rule of Jesus (Do unto others as you would have them do unto you, Matthews 7:12).   As if they were not constantly wailing of religious persecution under the Derg regime, they are now the most ardent supporters of the greatest religious persecutor in Ethiopia since Ahmed Gragn (only because the victim is now the EOTC they love to hate).