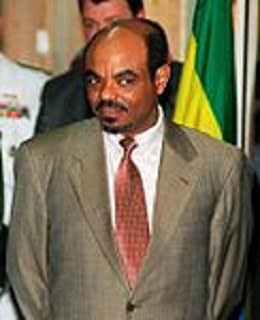 Now that I am firmly in charge (I think) and we have another week or so before the end of Ramadan when my challengers claimed they will call protests, I feel like I have time to write and bear to the world my inner feelings. Of course now, not only Ms. Anna Gomez but the rest of the world also knows that I like writing. So whether it is blogging on the Internet or writing on Ethiopian Herald, it is all the same. I miss intelelctual arguments. I even like correcting the typos in my opponent’s reports. You think Teferra Walwa and Bereket Simon give me the intelelctual void that I miss? I don’t think so. I chose them before they are dumb but loyal. Loyalty, as you know, is more important than anything else for any EPRDF official. It is a party policy.

Today, I want to write about why I feel I am confident that I am firmly entrenched in power. The opposition, as you have seen, had scared the day light out of me way back in May and June. I thought my days in power were coming to an end. I was weiging my options like a flight to Switzerland, an asylum in Khartoum (since Harare is occupied by an old aging enemy) or a retreat in my good friend’s Tony Blair country Cottage in England. But not any more. When my enemies said that they will have to wait until the end of Ramaddan before calling for a protest, I knew that they have finally chickened out. See you after Fasika! In fact, I am so much convinced about my victory, I have moved on. The election is now history. I have won whether people like it or not. It is not out of arrogance that I say this (eventhough I am not going to pretend that arrogance is not my trademark).

Like I told you, I have moved on. Right now, my enemy and worthy challenger is my nemesis Wedi Afeworki. I think war with Issayas is not only inevitable but also something that may benefit me. The old man, Ato Hailu Shawel, my softy liberal PhD challengers Drs. Berhanu and Beyene are now old news (See you after Ramadan and then Fasika!). I will not even arrest them. Why make them heroes when I can afford to just have them hang out in Addis Ababa. In fact, my gut feeling is that they will start quarelling among themselves. If they don’t do it by themselves, my security people will help them achieve that objective.

Coming back to Issayas, let me tell you why I think starting a war with him (or talking war) will help me and my party. I need to put the immediate focus of my government on some external enemy. Issayas is a perfect choice. He likes war. I like war. Peace is not good for governing. People expect too much. Holding to power becomes difficult. I have learnt my lessons from the election exercise that nearly sent me packing to England. But if I start the war talk with Issayas, that gives me like 5 years or so of time. First we talk about the UN presence. That issue alone will take 2 years to solve. At the end, Issayas will allow UN soldiers to monitor the border. As you know, I have no problem in that. These UN guys spend something like $200 million. Half goes to my people on this side of the border. The other half goes to my people on the other side of the border. It is a scam; but I like scams like that. Then, we will talk about the border itself. That can take many years by itself. Issayas wants to take land; I like giving territories. You would think that should solve the problem. Frankly, I wish it happened this way. But the presence of uncertainty has more advantage than solving a problem. I have learnt that in Addis Ababa. So, Ethiopians and foreigners be ready for more talk of war, border demarcation and the final settlement. That is my game plan for more years of power.

Now, I have to go and play ground tennis. I haven’t done that since last April.