War could resume between Ethiopia and Eritrea unless they accept a resolution of their border conflict, a former Horn of Africa UN envoy has warned. 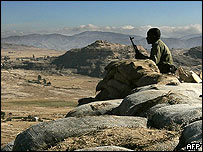 Experts are to meet both countries in the Hague, for what is being described as a last chance for a peaceful resolution of their border dispute.

The two countries have been given until November to agree on their border.

Otherwise the Boundary Commission, set up when the war ended in 2000, will demarcate it without their consent.

But the former United Nations special envoy to the Horn of Africa, Kjell Bondevik, told the BBC the positions of Ethiopia and Eritrea were becoming more entrenched.

“After my last visit in the region, which took place in June, I really fear an escalating of the conflict and I will not exclude the possibility of a new war,” Mr Bondevik warned.

For the past six years, some of the world’s senior experts on border disputes have been poring over obscure maps of the Horn of Africa.

Their task has been to define just where the border should lie between Ethiopia and Eritrea.

When peace was signed at the end of the 18-month war which killed tens of thousands of people, the two states agreed to put the border dispute to final and binding arbitration.

But when the Boundary Commission, established by the peace treaty decided in April 2002 just where the border should lie, Ethiopia refused to accept its findings.

This was – essentially – because the town of Badme, the ownership of which had sparked off the original conflict, was handed to Eritrea.

Despite many meetings, and much arm-twisting by the international community, this position has not altered.

Ethiopia has insisted the two countries discuss the demarcation, to prevent villages from being split in two.

Eritrea has been equally adamant that the ruling must be implemented as it stands and that there is nothing to talk about.

In November last year the Boundary Commission, fed up with the lack of progress, gave both parties a year to accept the boundary as the Commission had determined, as they had promised to do.

Otherwise they said they would declare the border demarcated, and wash their hands of the whole affair.

The danger is that Ethiopia and Eritrea remain bitter enemies and have forces massed along their one-thousand kilometre border.

Eritrea has increased the number of militia and troops inside the 25km Temporary Security Zone that runs along the border, increasing the possibility of clashes with Ethiopian forces on the southern side of the zone.

At the same time, the number of UN troops patrolling the border has been gradually reduced, making it more difficult for the organisation to monitor the situation.

Experts warn that tension is rising, and believe that if Thursday’s meeting fails to make progress, the border conflict could be re-ignited, with terrible consequences.