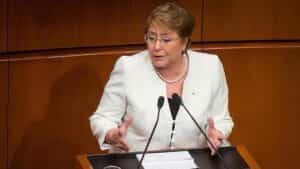 The UN human rights chief on Saturday expressed deep distress over recent violent clashes between Muslims and Orthodox Christians in Ethiopia, in which at least 30 people were reportedly killed and more than 100 others were injured.

“I call on the Ethiopian authorities to promptly initiate and conduct thorough, independent, and transparent investigations into each of these deadly incidents and ensure that those found to be responsible are held to account,” UN High Commissioner for Human Rights Michelle Bachelet said in a statement.

She said the inter-religious clashes were first reported in Gondar, a city in the northern Amhara region, on April 26, which were reportedly connected with a land dispute, and they quickly spread to towns and cities in multiple other regions and the capital Addis Ababa.

She added, “I understand two mosques were burnt and another two partially destroyed in Gondar.

“In the apparent retaliatory attacks that followed, two Orthodox Christian men were reportedly burnt to death, another man hacked to death, and five churches burnt down in Silt’e Zone…. located in the southwest of the country.”

The UN rights chief said there was further violence on April 28 in the Debark town in the Amhara region, and in the Dire Dawa city in the northeastern Afar region.

Police have reportedly detained at least 578 people in at least four cities connected to the violent clashes.

“Those arrested must be fully accorded their due process and fair trial rights in accordance with international human rights law, without discrimination.”

Bachelet stressed that the underlying causes of this shocking violence must be addressed promptly “with the meaningful participation of survivors, families and affected communities” to prevent further inter-religious violence.

Orthodox Christians account for 43% of Ethiopia’s estimated 120 million people, while about one-third of the population are Muslims.