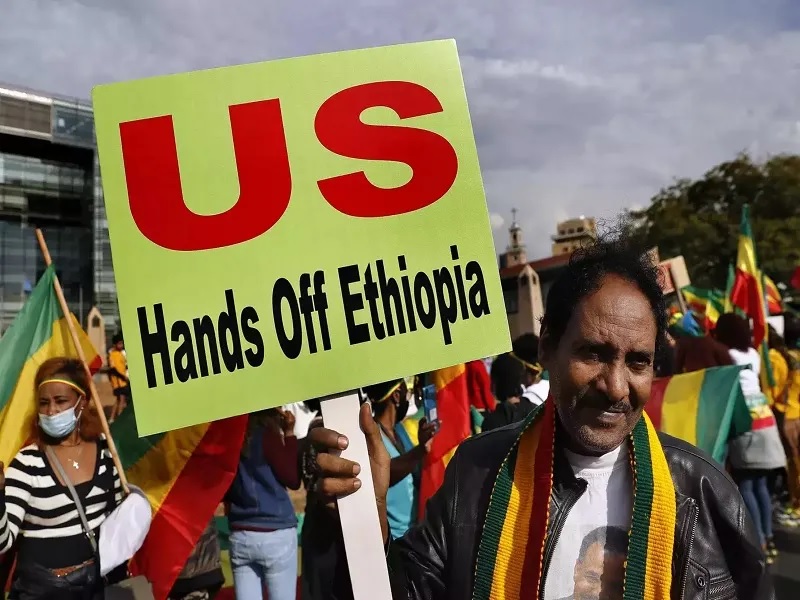 The Government of Ethiopia, civil society (especially Tigrayans), and their supporters abroad must prepare for defending against this impending scenario, though if the latest conflict is anything to go by, then they’ll certainly succeed.

“Ethiopia Had A Good Reason To Vote Against The UN Resolution On Ukrainian Reparations”, namely to preemptively defend itself from the “lawfare” scenario of further US meddling in its domestic affairs through the creation of similar mechanisms as those that’ll be created against Russia on that pretext. That sequence of Hybrid War events is no longer the realm of speculation after an unnamed senior State Department official told the media on Tuesday that the US might sanction Ethiopia yet again.

That figure threatened to wield these economic weapons if non-ENDF forces like Afar militias, Amhara special forces, and Eritrean troops don’t withdraw from the Tigray Region per their commitment as enshrined in this month’s peace agreement between the Government of Ethiopia (GOE) and the TPLF. They also added that this could be pursued to “hold actors accountable for human rights violations or for the purposes of trying to ensure that this agreement is respected and abided.”

On that topic, the unnamed source said that while the US hasn’t yet made a determination on the atrocities allegedly committed throughout the course of the Northern Ethiopian Conflict, it’s still “absolutely committed to ensuring that those who are responsible for gross violations of human rights are held accountable”. This very strongly hints that sanctions could be wielded against those that it determines are supposedly responsible for committing war crimes.

It should also be pointed out that “The US Continues To Disrespect Ethiopia By Playing Word Games With The TPLF’s Name” after the unnamed official referred to that group as the “Tigrayan Defense Forces” and its TDF acronym a total of three times. State Department spokesman Ned Price had earlier done the same and even doubled down upon being challenged about this by a journalist, thus confirming that it’s the US’ unofficial policy to provocatively use these terms interchangeably.

By contrast, that same unnamed official only used the proper TPLF terminology twice, meaning that the improper one that isn’t mentioned anywhere in the recently signed peace agreement was employed one time more. Considering this tacit signal of support for that group as well as its sanctions threats that it plans to wield as a Damocles’ sword over the heads of the GOE, irrespective of whether they’re implemented on a similar pretext as the Ukrainian reparations one, it’s clear that the US is meddling.

This illegal interference in Ethiopia’s domestic affairs amounts to a violation of both conflicting parties’ will with respect to the part of their joint statement calling on everyone across the world to support their fledgling peace process. Provocatively employing wartime terminology and preparing to wage another form of Hybrid Warfare against the GOE is unfriendly to the extreme and suggests that America plans to complicate the peace process as revenge for the very fact that it was agreed to in the first place.

The US planned to fight the GOE to the last Tigrayan as punishment for the former’s independent foreign policy and attendant decision to remain neutral in the New Cold War between that declining unipolar hegemon and its vassals on one side and the rising multipolar Great Powers of China and Russia on the other. Ethiopia’s defeat was supposed to serve as a powerful example deterring all other Global South countries and especially those in Africa from following in its footsteps.

Instead, Ethiopia’s victory resulted in the opposite outcome in the sense that all other Global South countries and especially those in Africa now see that it’s possible to win against seemingly insurmountable odds so long as society remains united and stands in solidarity with their armed forces. The powerful example set by Ethiopia therefore works against the US’ hegemonic interests, hence why it’s once again conspiring to destabilize that rising African leader through “lawfare”.

Raising awareness of this plot, the existence of which is unquestionably confirmed by the unnamed State Department official’s own statement of intent with respect to once again sanctioning Ethiopia on human rights and military pretexts, is meant to ensure that it fails. The GOE, civil society (especially Tigrayans), and their supporters abroad must prepare for defending against this impending scenario, though if the latest conflict is anything to go by, then they’ll certainly succeed.