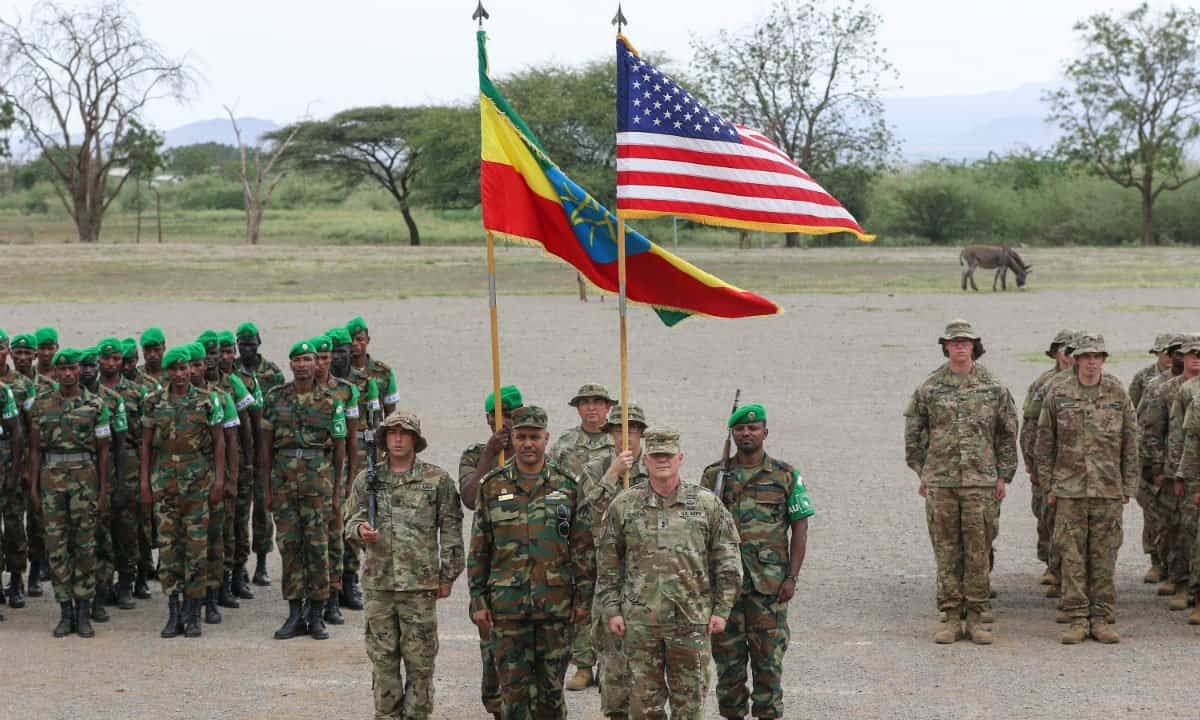 Cleveland, Ohio, in the US, and Bahir Dar, Gojam, in Ethiopia have been Sister Cities for 18 years now. It is because of this type of people-to-people relationships as well as genuine diplomatic work that brought about mutually respectful and beneficial relationships between the two countries in the past.

I would be remiss if I did not mention that I am a member of the board of Menelik Hall Foundation — named after Ethiopia’s legendary 19th Century Emperor Menelik II — that helped establish this sisterhood in collaboration of the City of Cleveland under Mayor Jane L. Campbell in 2004. Because of this and other historical relations between the two countries, I am interested to know and share information about events that concern the relationship between the US and Ethiopia. A brief background history is in order.

Robert P. Skinner, the first official American representative to Ethiopia in 1903, negotiated a treaty regulating commercial relations between Ethiopia and the United States. Skinner who was born in Massillon, Ohio, in 1866. Ohio has a real connection with the establishment of American-Ethiopian relation which has lasted till now.

The diplomatic relationship that had been started a century ago by Mr. Skinner led to the establishment of The American Legation in 1908-1909, and that lasted for decades without interruption until 1980. Between 1980 and 1991, the two embassies were administered at charges d’affaires level. It is to be remembered that in 1974, Emperor Haile-Selassie of Ethiopia, was overthrown by a military junta and Ethiopia become socialist state and aligned itself with the East, namely the then Soviet Union. The reasons for this will be discussed later.

During the long cordial relationship with the United States before 1974, many mutually beneficial things were accomplished. Just to name a few major ones:

These are, but a few examples how the US had won the hearts and minds of Ethiopia and Ethiopians in the past.

Remember the song “We are the World,” which showed that US humanitarian aid was pure, internationally appreciated and saved millions of lives in Africa? Those were the days: America at its best and Ethiopian-American friendship was pure, generous, genuine, and constructive.

So much so, in every way, Ethiopia was considered as one of the best allies of the US in Africa during those years. I remember even in the 1960s, when President Kennedy was assassinated that the government of Ethiopia ordered schools closed to mourn the loss of such a friend of Ethiopia. Those were the best of times in diplomacy and people-to-people relationships between the two nations.

However, the Ethiopian-American relationship started to deteriorate after the US-friendly emperor, Emperor Haile-Selassie, was overthrown by a military government, supported by the student movement demanding land reform and other “democratic rights.” This new Government, known as the Dergue/Derg (Committee), quickly and firmly identified itself with Soviet-style Marxism.

US and Ethiopian relations started travelling the wrong path, because of ideological differences and countermeasures taken against Ethiopian military government by the US. There were glaring diplomatic failures on both sides.

The first was the closure of Kagnew Station in 1977. This was the first US diplomatic mistake by the US, under the Carter Administration. The failure of the Carter Administration to provide military assistance at the time that Ethiopia was fighting neighboring Somalia, forced the military government of Ethiopia to look elsewhere. Note that the Ethiopian military was dependent on the US for spare parts and other military necessities. This forced the desperate military government of Mengistu Hailemariam to appeal to Russia for military aid. Russia gave $3-billion military aid to Ethiopia. As a result, because this unanticipated consequence of the US policy, Ethiopia was lost to the US and got replaced by the Soviet Union until 1991. Russians who were stationed in Somalia came over to Ethiopia, and America traded Ethiopia for Somalia, which was later realized by the US as an egregious political blunder.

In the following 17 years, the US policy makers spent time and treasure to reverse the policy error of the Carter Administration. From 1977 to 1991, the US spent millions to indirectly help overthrow the military government by helping the TPLF and ELF, the Tigrayan People and Eritrean Liberation fronts that had avowed Marxist-Leninist ideology. These guerilla fighters were stationed in the neighboring Sudan from where they launched their struggle to overthrow the Dergue, the military led government.

Regardless of these fighters’ ideological differences as Marxists, the US backed these fronts who were able to play the game as directed by the US policymakers of the time. When the US efforts were realized and the Military junta was removed from office, the Marxist fighters to liberate Tigray and Eritrea were rewarded for playing and winning the game and were installed in control of Ethiopia with the support of the US, as heads of Ethiopian People’s Revolutionary Democratic Front, EPRDF in 1991. They were installed to rule over the entire Ethiopia as opposed to liberating their ethnic groups only, for which they had been fighting to liberate from Ethiopia for years.

The EPRDF was dominated by a minority ethnic group, the TPLF (Tigrayan Popular Liberation Front), which ruled with an iron fist for the 30 years after the military ruler, Mengistu Hailemariam, was removed from office. The good intention of the United States of installing a civilian government nevertheless brought untold misery of the Ethiopian people because of the intentional government policy of the EPRDF/TPLF of dividing the people along languages and ethnicity. It was a government which could not care less about human right or democracy. However, the US administration looked the other way, enabling the TPLF to do whatever they wanted as leaders of EPRDF.

The EPRDF/TPLF led Government was focused on how to enrich its leaders and their ethnic fighters and worked hard to weaken and dishonor Ethiopian territorial integrity. The EPRDF/TPLF Government diligently worked to help Eritrea to become an independent nation, allowed it to secede from Ethiopia including allowing Eritrea to take the ports of Assab and Massawa, rendering Ethiopia a land-locked nation. What government willingly gives up its territory unless it had a hidden agenda?

The TPLF leadership did this with the hope that someday they would themselves secede and join Eritrea and form what they called “Greater Tigray.” That was a conspiracy-filled treasonous dream which failed miserably. The “good” intention of the US once again became a huge policy blunder.

Subsequently, the TPLF-led Ethiopian Government went to war with Eritrea from May of 1998 to June 2000. It was a war in which thousands lost their lives from both sides over a piece of land between the borders of the countries. The US -Eritrean relationship has not been as strong as it should be for many reasons, including due to the US-encouraged UN sanctions against Eritrea as well as the US favoring the TPLF led Government of Ethiopia.

The Ethio-Eritrea dispute was not resolved until 2018 when the TPLF-led Government was replaced by the Government of Prime Minister Dr. Abiy Ahmed in 2018. Even the US prestige and efforts had not been able bring peaceful settlement to the dispute between Eritrea and Ethiopia because of diplomatic failure of the US to lead a negotiated settlement.

Ethiopians still believe that the US-Ethiopian relationship can be ameliorated, and the friendship restored if the US respects the will of the Ethiopian people and supports the democratic governance of Ethiopia.

To make matters worse, on November 4, 2020, the TPLF attacked the Ethiopian Defense Force, EDF, that had been stationed in Tigray region for over twenty years to protect Tigray from conflict with Eritrea. This unprovoked and unanticipated attack of EDF, while they were sleeping, prompted a swift retaliation by the government of Ethiopia, under the leadership of Abiy Ahmed. Once again, the US administration elected to support the registered terrorist organization, TPLF in this war.

Many in the diplomatic circles understand that the TPLF- initiated the current war in Ethiopia, and that the TPLF garners support from the USA and other western nations, because it is believed to be a proxy war against China’s growing influence in the Africa in general and Ethiopia in particular. The diplomats suggest that if Ethiopia is destabilized, the Chinese would divest from the Horn of Africa. If that is indeed the case, the US strategy needs a reconsideration, and that war can only be won by working with the democratically elected Government of Ethiopia and by making counter investment to that of the Chinese and not by supporting TPLF, which brought in the Chinese to Ethiopia in the first place.

Indeed, as things stand now, the PRC, whose influence Dr Abiy had quietly been working on to reduce in the country, are now firmly back in favor in Addis Ababa, and the US is firmly out of favor. The quiet diplomacy of the Ethiopian government was not given a chance to develop. This is still another blunder of diplomacy.

The US-Ethiopia relations were at their best when US invested in Ethiopia’s development, security, cultural, educational, humanitarian, and other programs of mutual interest.

Ethiopia’s Prime Minister is committed to democracy and the rule of law and there is NO difference between the Abiy Government and the Biden Administration on ideological grounds. Ethiopia’s democracy should be encouraged as it was for the first time in the history of Ethiopia that people voted approving the current government’s part by over 94%.

Ethiopia would like to continue its mature and historical relationship with the US. If the US would invest in Ethiopia, like the Chinese do, and work to support democracy and free market ideals, there is no reason that the current semi fractured relationship cannot be repaired, and the historical friendship continued or restored. The US has a lot to gain to be on the side of the Ethiopian people rather than helping the TPLF which is determined to break up the unified nation.

The Ethiopian people have chosen unity over division, peace over war, harmony and coexistence over conflict, friendship over animosity, democracy over its alternative, as well as mutual respect among nations of the world, especially the United States of America. Friendship is what we help to make it.

I implore the Biden Administration to help bring peace and stability in Ethiopia and continue the longstanding friendship between the two countries and help Ethiopia’s democracy flourish. Lift any sanctions you plan to impose or have already imposed on Ethiopia, support democracy, acknowledge the duly elected democratic government of Ethiopia, support the GERD, the Great Ethiopian Renaissance Dam impartially, reignite the people-to-people relationship with Ethiopian-American cultural exchange programs as in the 1960s and ‘seventies. Most of all, counter the investments that the Chinese are making by encouraging investment in all of Africa in general and in Ethiopia in particular.

In the last couple of days, President Biden and PM Abiy of Ethiopia have had encouraging phone exchanges regarding improved relations between the two countries based on certain conditions at the conclusion of the war, currently taking place between the TPLF forces and EDF. With the current HoA envoy Jefferey Feltman stepping down and the appointment of Ambassador David Satterfield, I hope a new and constructive dialogue will commence and that the US policy will support the aspiration of the Ethiopian people. I hope that the US will play an impartial role in bringing peace and stability in the HoA.

The Ethiopian people are nostalgic to the halcyon days when Ethiopians and Americans had a friendship based on mutual interests and respect for one another. As the saying goes: those who do not remember history are condemned to repeat it. Let has not push Ethiopia once again to align itself with those that do not have the best interests of the West in general and of the US in particular.

I have every hope that you can help make that happen.

1 thought on “The US-Ethiopia Relations-now wounded, can it be healed?”