UN Article 4: Optional Protocol to the Convention on the Rights of the Child on the involvement of children in armed conflict1 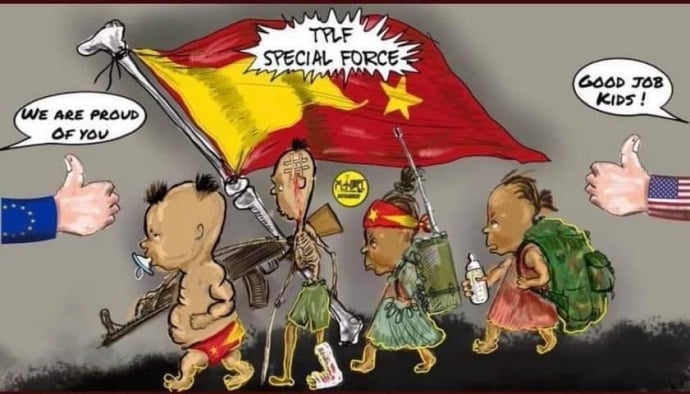 “JUST EAT ME WITHOUT A PRETEXT”

“A hyena somehow befriended with a donkey. They started a journey somewhere together. The donkey was eating grasses all her ways, but the hyena was starving and miserable. They arrived at a freshwater spring and stopped for a drink. The donkey waited to see where they hyena was going to drink. She went far below the downstream; from the point where the hyena was and started drinking for herself. The hyena was furious and started a brawl accusing her of spoiling the clean water he was drinking. The sarcastic donkey simply stated: ‘where did you see a river flowing upstream? Just eat me without a lame excuse.”

The USA and her Western allies are looking for a pretext to launch an attack on Ethiopia to save the skin of their puppets called the “Tigrayan People’s Liberation Front” (TPLF) and dismember Ethiopia like what they had done to Yugoslavia. They issued a warning. It didn’t work. They withheld their aid money. That too did not work. They went to the Security Council to obtain permission. The Russians and the Chinese blocked them. They seem to have run out of options. Naked aggression is the only one on the table. Imagine this. What would the UK have said if some idiots had told them, not to fight the IRA when they went to Ireland to establish rules and orders there, in 1980/1990s? Well, it appears that Ethiopia does not measure as sovereign state in the eyes of these self-appointed gendarmes of the world.

Karen Bass, The United States Congress Member and Chair of the House Foreign Affairs Sub Committee on Africa, said that she met the Ethiopian Diaspora on Saturday [July 17, 2021], who asked her why the US had not yet sent its military to resolve the crisis in Ethiopia’s northern province2. Really? Who are those Ethiopians if one may ask?

Berhanu (2021)3 recently discovered the incestuous relationship between Western Governments and Western Media. Remember the story of WMD in Iraq? The media was going crazy about it. Iraq was destroyed by the USA and their allies but there was no WMD in that country. Remember the story about Libya’s role in the bombing of Pan Am at Lockerbie? The poor Government of Libya attempted to prove it had nothing to do with the bloody crime in vain. It even cooperated with the investigation and allowed her national, Abdel Basset Ali al-Megrahi, to be taken out of the country to Scotland, tried, charged, and sentenced to life imprisonment. The Libyan Government had to pay a huge lump sum of dollars to the families of the victims. That did not spare poor Libya from being reduced to rubbles by the Western superpowers.

Another blatant warning has just been issued by USA to the Ethiopian Government. Although the Government had allowed to use its air and land to reach the people in rebel-held areas of Tigray, the USA is demanding unchecked supply of whatever they wished to deliver the rebels. USAID Administrator Samantha Power is going to Ethiopia this week probably to deliver an ultimatum to Prime Minister Abiy Ahamed. She will also meet leaders of the TPLFand get well entertained in Mekelle. The TPLF had vowed never to lay their arms until they toppled the Addis Ababa and Asmara “regimes”. The world should have condemned the TPLF on its belligerent actions, but the USA continues to blame the Government of Ethiopia for any crime committed by the terrorists. They are attempting to twist the arms of the Ethiopian government to allow them roam as they like on the air of Sovereign Ethiopia to carry out their plans bringing weapons for the rebels in the name of aid. They wanted to feed and arm the rebels so that they would be able to destroy the age-old Ethiopia. Encouraged by the USA’s backing, the TPLF went out of its ethnic enclave and launched an attack on the neighbouring Afar and Amhara Regions with no Western Media or Governments condemning their act. Innocent Afars were attacked, and many are being killed. The Afar and Amhara local militia are gallantly resisting though. They USA is itching to bombard them like the Serbs.

The TPLF forces attacked this week the convoy of nine trucks travelling to Tigray through the Afar region4. One would have expected the aggression should have been condemned. No one is saying anything in the Wests. However, the USA unashamedly placed the blame on the Ethiopian Government. From the video of the attack, it was evident the attackers were communicating in Tigrigna.

THE SILENCE OF THE TIGRAY LAMBS!