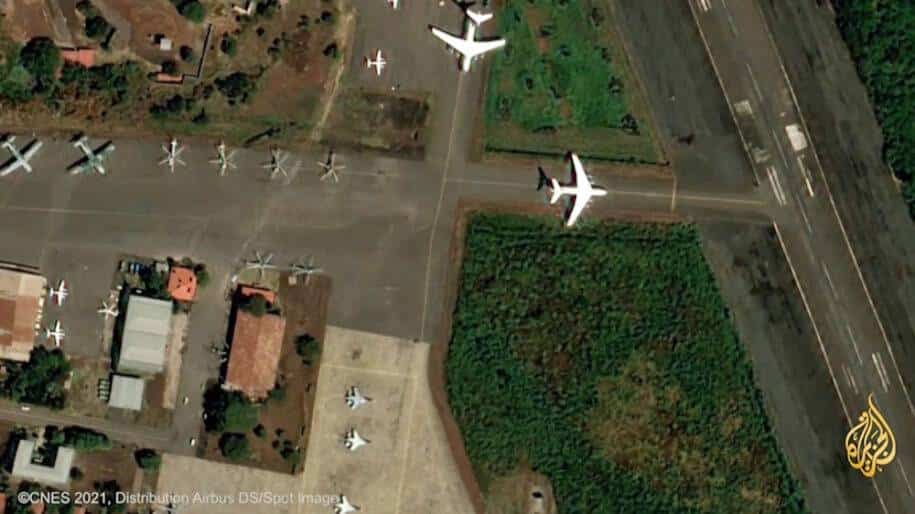 Al Jazeera reported on 25 November that the UAE had established a military air bridge to Ethiopia in support of the Ethiopian National Defense Forces’ (ENDF) “anti-terrorist” campaign against the Tigray People’s Liberation Front (TPLF). This organization used to be the most influential faction of the former ruling party before falling out with Prime Minister Abiy Ahmed last year, after which it launched an ambush against the ENDF’s Northern Command in its eponymous region 12 months ago. This attack triggered the start of the war, which continues to this day after the TPLF rejected the ENDF’s unilateral ceasefire over the summer that accompanied the military’s withdrawal from Tigray Region and subsequently invaded the neighboring Afar and Amhara Regions as it raced towards Addis Ababa.

Neither the UAE nor Ethiopia have confirmed the existence of this military air bridge as of the time of writing, but the satellite footage that Al Jazeera claimed to have received and published in their report adds credence to the outlet’s claims about this. Should they be accurate, then this would be one of the UAE’s most significant military interventions to date. The Gulf country earlier played a key role in the Saudi-led Yemeni War prior to scaling back its conventional involvement in favor of mostly focusing on providing support to the Southern Transitional Council (STC). Before recalibrating its approach to that conflict, the UAE reportedly established military facilities in nearby Eritrea and the breakaway Somali region of Somaliland to facilitate its intervention there.

All of this was consistent with the UAE’s goal of becoming a major player in the Gulf of Aden-Red Sea (GARS) region. The diplomatic dimension of these ambitions was evidenced by Crown Prince Sheikh Mohammed bin Zayed’s (MBZ’s) pivotal role in brokering peace between former rivals Ethiopia and Eritrea in summer 2018. The leaders of those two countries received the Emirates’ highest civil honor that July, during which time they thanked MBZ for everything that he did to bring these neighboring nations back together following nearly two decades of tensions. It’s important to note that PM Abiy received the Nobel Peace Prize a year later in 2019 for taking the initiative to resolve his country’s long-standing conflict with Eritrea.

The UAE has therefore proven that it’s a sincere friend of Ethiopia and Eritrea, which explains why it might have established the military air bridge that Al Jazeera recently reported on. The TPLF is the greatest threat to the Horn of Africa region in which Emirati influence has enormously expanded over the past couple of years. Abu Dhabi doesn’t want to risk seeing the unprecedented progress of the past few years reversed by that “terrorist-designated” group’s return to power. In the same vein, the country also regards Yemen’s Ansarullah/Houthis as a similarly destabilizing “terrorist-designated” threat to the Arabian Peninsula. Taken together, it can be concluded that the UAE’s formal military intervention in Yemen and its informal reported one in Ethiopia are driven by the same regional security concerns.

To elaborate, the UAE is against militant non-state actors that endanger peace in these interconnected regions adjacent to GARS. Some might question why it tacitly supports the Somaliland and South Yemeni separatists then, but the difference between the first-mentioned pair and the TPLF/Houthis is that the former has no expansionist ambitions while the latter aspire to seize control of the entire state against which they’ve waged war. Furthermore, just as the Houthis have attacked neighboring Saudi Arabia, so too has the TPLF attacked neighboring Eritrea. In fact, it was under TPLF-ruled Ethiopia that Addis Ababa remained mired in its bloody conflict with Asmara. Its return to power would therefore destabilize the Horn of Africa, just like the Houthis’ conquest of Yemen would do the same for the Arabian Peninsula.

It’s of the utmost importance for the world that the GARS region is surrounded by stable and responsible states, including those that thus far remain unrecognized such as Somaliland and South Yemen. This waterway is much too important for trade between the two halves of the Eurasian supercontinent to risk its potential shutdown in the event of a regional security emergency such as the Houthis and/or TPLF threatening shipping there as part of a plot to blackmail the international community to support their respective political demands. The Houthis’ aspirations to seize full control of Yemen could lead to such a scenario just like the TPLF’s quest to return to power in Ethiopia could lead to another war with neighboring Eritrea, both of which would endanger the GARS region.

Acknowledging the strategic commonalities between these two campaigns, both with respect to the goals of those non-state actors that are driving these conflicts as well as the UAE’s interests in stopping them, it can be said that they’re actually two parts of a larger conflict in this part of the world. Although the Houthis and TPLF aren’t coordinating their efforts, at least not yet, they both hope to come or return to power respectively in order to exert influence – whether directly in the former’s case or indirectly in the latter’s vis-à-vis putting pressure on Eritrea – over the geostrategically significant GARS Region. The UAE, by contrast, hopes to prevent them from doing so since it fears that they’d exploit this influence to blackmail the global economy.

In other words, the UAE wants to stop the emergence of new “rogue states” in the region. Most of the international community has yet to acknowledge Abu Dhabi’s contribution to retaining the GARS status quo even though its military interventions in this part of the world are aimed at supporting every responsible member’s interests there. In fact, the bipartisan bill that was recently introduced in the US Congress –misleadingly named the “Ethiopian Peace and Democracy Promotion Act of 2021” (EPDPA) – threatens to sanction Ethiopia’s arms partners. With this in mind, Al Jazeera’s latest report could be exploited to that end if the Biden Administration decides to leverage it in that direction. That, however, would risk further ruining the US’ already strained relations with the Gulf.

Regardless of whatever happens in that respect, it’s important for the international community to appreciate the UAE’s leading role in ensuring stability in the GARS region and pushing back against the non-state actors that hope to take control there, which risks the emergence of new “rogue states” that could blackmail the global economy if they threaten international shipping through that waterway. The UAE’s pragmatic support of Somaliland and South Yemen shows that it’s not against non-state actors per se, only those that are fighting to take full control of their countries and haven’t proven that they can behave responsibly in the international sense upon de facto coming to power. As the war in Ethiopia intensifies, the UAE’s reported military air bridge there will become even more important than ever.