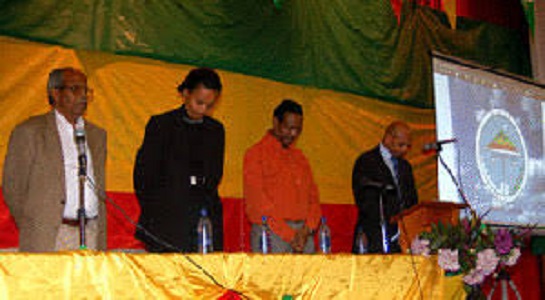 In the past years, London has hosted trade and human rights defenders and rising political starts of Ethiopia. This unaffiliated and independent observer had written his reactions in his own amateurish ways about all of them and this time it wouldn’t be any different.

On November 9 it was the turn of Ms. Birtukan Medeksa, the President, and Ato Akilu Girgire, the Executive Committee Member and Head of planning and Strategy of the Unity for Democracy and Justice Party (UDJP), the inheritor of the spirit Kinijit (CUD) to be hosted at London Acton Town Hall. Kinijit started challenging Woyyane and my of its leaders were incarcerated. Upon release from jail Woyyane systematicall frustrated and the organisation had split up. From the ashes of Kinijit rose Andinet (UDJP), with the majority of Kinijit leaders and the slogan of peaceful struggle. Many flocked to Acton town hall, partly to see that mazing young lady by the name Birtukan and partly to find out how Andinet would succeed in ousting the dictators in power that has closed its doors and windows and denied any chance of losing power to the opposition any more.

Like many daughters of Ethiopia, Birtukan is very polite and down to earth young lady. Take one look at her, you would be surprised she is just an ordinary Ethiopian young lady, not what you expected to see. She wears that youthful chocolaty deceptive young face, with deep hidden maturity. In fact this writer had the first chance to meet this amazing daughter of Ethiopia in the London St Mary of Zion’s Church yard, where she intermingled incognito with the congregation totally unnoticed. She was wearing head to toe the Ethiopian church goers girls garment shawl “netala”. Had it not for a friend, this writer could brushed her aside and passed her. She smiled and coyly greeted him, and brought him the news of his most beloved icon, Prof. Mesfin Woldemariam. You talk to her, you feel as if you know her the whole of your life.

The meeting started in the usual Ethiopian style – late, very late. However, when the guests arrived, everyone stood up to give the heroine and hero a standing ovation. With a bowed head, Birtukan begged the audience to have a sit, but showering the adoring audience with the infectious smile.

Then Ato Abebe Tolessa, the current Chairman of the Support Organisation opened the meeting with a minute silence to pay tribute to the murdered innocent citizen of Ethiopia in the aftermath of May 2005 election. That was very touching. Abebe Tollessa electrified the audience in his usual flamboyant style by referring to the recent historic victory of Obama in the US election under the slogan of “Yes We can!”. He welcomed the guests and said victory was inevitable under the leadership of those determined warriors of justice and democracy. He called everyone to renew the effort to galvanize the struggle until justice was done in the birthplace of the exiled communities of Ethiopians in London.

Zelalem Tessema, the chairman of the day, an orator in his own rights, without much ado invited straight to the floor W/t Birtukan Mideksa to address the audience with the message she brought all the way from Ethiopia on the delegate’s tour of Europe.

Birtukan graced the audience once more with that lovely smile as if she was looking one by one at everyone face in the eyes and saying: “I am your sister” to the young and and “your daughter” to the old. When she is not smiling however, one can see that deadly determination. After properly greeting the audience she indicated that most of the talks would be done by Ato Akilu Girgire, the Executive Committee Member and Head of Planning and Strategy of UDJP. However, she wanted to remember those who gave their lives in November 2005 and sprang to her face and walked towards the tribune from where she felt comfortable to deliver her brief message with precision. One wonders if she had that potential of penetrating people’s hearts and minds. You can’t help but simply like her. Could it from her training to become a judge or just Supernatural bestowed power that controls imagination of her audience? The audience was breathless as she spoke about those who gave their lives to protect her and other CUD leaders. She swore in the name of those perished fighting for democracy and equality that she would never abandon the struggle until justice was made in Ethiopia. After captivating the audiences hearts and minds with a moving speech, she silently went to her seat while the audience erupted into deafening applaud.

Then took the floor the Head of the Planning and Strategy of UDJP, Ato Akilu Girgire. You take one look at him and wonder if he can speak anything convincing at all. Well, obviously, the cream of the crop of Ethiopia must have joined UDJP. The man is an orator. He was totally confident and flawless in his deliverance of his speech. That must have been why UDJP chose Akilu to be their head of Planning and Strategy. We have heard of business or military strategy. However, peaceful strategy to defy tyranny is less heard of. He laid down clearly his master plan, in the most interesting way, how the party was going to increase the number of members, how to raise funds, how to campaign and how to get rid of Woyyane (well he said “EPRDF” to be fair on him) and empower the people. The man has got his blue print beautifully with a clear vision and timescale. Nothing was exaggerated. Nothing was under stated. Everything he stated was achievable. Yichalal!

They had the will. They had the expertise. They had the people behind them. Everything seemed possible. The most important thing was the fact that they were determined to oust the dictators, not by the power of the gun but by the power of the people. Ato Akilu stressed on the fact that the regime in power was not going to go away voluntarily. It has to be challenged. He insisted on going all the way for the gold. He swore never to shy away from going to get what rightfully belongs to them. Would it be getting killed in the process? They would be readyl die for a cause. Would it be imprisonment? They are ready to face it. They would keep on demanding justice and holding Woyyane/EPRDF to its own constitution. The law that had been on paper was not that bad at all, according to Ato Akilu. It was just that Woyyane never put it in practice. So, Ato Akilu stressed that Woyyane/EPRDF was going to be forced to respect that law.

A good example was the recent Poetry event held in Addis Ababa by the youth of Andinet. After the hall was booked and everything was organised, 1000 people turned up to listen to the poetry event. The police tried to prevent the event from happening by threatening to arrest all of them. The youth defied. While the confrontation began, the guest of honours, UDJP party leaders came to the event only to see the stand off. The Police told W/t Birtukan to tell the youth to disperse otherwise unpleasant event would take place. W/t Birtukan told him “never” and joined the youth. After two hours, the police let them in and a fantastic poetry event took place. Ato Akilu told the audience that was how peaceful struggle had to be waged. Some of those poems are currently circulating on the cyber space.

After the Ato Akilu finished his interesting presentation the meeting flour was opened for questions and discussions. The main question from the audience was queries how Andinet chose to fight peacefully under such horrendous situation. The Woyyane had narrowed the playing field.

Birtukan shamed everyone for asking such questions because she expected that the audience could have encouraged them to go head and force Woyyane to open the door it has shut. Peaceful struggle was not going to be an easy way out. According to W/t Birtukan, it would be the most difficult one but then it was the only durable way of bringing desired type stability and democracy in that troubled land of ours. Andinet didn’t see any other viable method of struggle but to wage that very peaceful struggle. It didn’t mean to be a sitting duck to the killers. You go fighting on as going can, defying all the odds and fighting like all brave people would fight for their rights. According to W/t Birtukan, the regime is so unsecured shutting its doors and windows. That was the sign of being disturbed. Shutting doors and windows will not keep away the opposition from crack-opening it one day. They would be ready to use every available opportunity to knock at the door. They would go for elections provided that the Election Commission would those eight conditions they set up before going to jail. The conditions are still live and breathing to date. If the regime and Electoral Commission meet those demands, Andinet would be in. Otherwise, they would be their escort. The would fight for justice. This point had been the position of the two delegate members, W/t Birtukan and Ato Akilu.