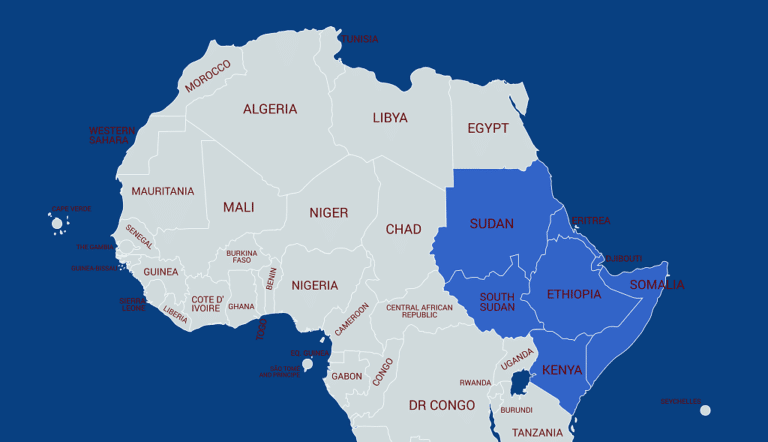 Irritant military doctrines are imported from the Arab Gulf  and other Arab States through the prodding , perhaps, of others and these take advantage of the poverty already prevalent in the region to sow havoc in an already messed up and violent region.  Many young persons are given scholarships which they could not dream of, in their lives to major centres in the Arabian Gulf and are returned to their homelands messed up mentally to start off violent revolutions with no end goals to keep already politically disturbed region in constant turmoil. They are trained to cheat and maim their families and people. Others are financed and start businesses to keep financing still others that perform according to their bidding, while others play on lofty goals that they truly do not believe in. Still others truly believe that they are defending their belief system, which is made to appear to them to be under assault. These form one of the main actors in the game of miseries in the Horn of Africa States.

The main opponent of these pseudo-religious warriors are the armies of major powers who after 9/11 embarked on what is generally referred to as the “Unending War on Terror”. Poor souls who would have farmed their lands and stayed put in their small enclaves in the middle of nowhere are removed to distant lands trained in the art of irritant militancy and returned back to sow havoc in the lands they should have been farming and then targeted by the latest war technologies of mankind. Many populations are removed from their lands and many of them migrate and run away to distant lands they would never have dreamed of, to live in life styles they would never have thought was possible in their youth. Unbridled war machines were set loose on the lands of the Horn of Africa States, fighting off, supposedly, terror and these actors on the forefront of the war on terror remain one of the actors in the game of miseries in the Horn of Africa States.

A new moronic group claiming to be civil activists and politicians have risen in the region over the past several decades. State infrastructures were taken over by graduates of the civil strives in the region and only add to the misery of the region, for they are, good in destruction and not in construction. These pseudo-politicians have no clue on governance or organization of formal civil societies. Many of them have never worked in any office and risen to lead nations. Others were mere clan militants fighting off other clans and still others were those motivated by personal gains. Human greed stops at nothing when released! The new political elite of the region constitute another major actor in the game of miseries in the Horn of Africa States region.

When a crisis takes root in a region and peace and reconciliation among the protagonists seems to be a distant phenomenon, armies are generally sent from elsewhere to keep the warring groups from causing more harm. But sometimes, those brought to keep peace in a region themselves become part of the problem and not the solution. Getting used to lives they would never have dreamed of and incomes higher than what they were earning back at home, is a major factor to entice them to keep the warring groups keep fighting each other in the lands they were brought to keep peace and the Horn of Africa States is not an exception. Thousands of African soldiers and others were brought to the region almost two decades ago and they still remain. They are no longer considered by the people of the region as a solution to their problems but as part of the problems of the region itself and these peacekeepers remain one of the actors of the game of miseries in the Horn of Africa States.

Armies of nongovernmental organizations (“NGOs”) all pretending to be helping the region remain also another irritant of the region. Despite the good works many have done in the region, it does appear, that their activities have become an end by themselves for them. It is a source of employment, and they would not be happy if things were settled and it appears that it is in their interest to keep the problems going as long as possible, or until another problem crops up somewhere else to keep them busy. To date these NGOs, remain one of the main actors in the game of miseries in the Horn of Africa States.

Extreme weather is now common all over the world. Dry river beds and lakes in Europe and little rain was at one time a far distant and almost an impossible matter, but we live this today, in August 2022. The effect of weather changes has been most devastating in the Horn of Africa States region. It is needless to repeat here that the region is already known for scarcity of food, water and, of course, insecurity. Climate change has not only exasperated existing tensions within the clan/tribal civil strives but also added a new dimension of pitting the region against far off countries such as Egypt, which unreasonably fears the new Grand Ethiopian Renaissance Dam, would affect water flows downstream. Climate change is, therefore, another actor in the game of miseries in the Horn of Africa States region.

Superpower competition was always a major powerplay in the Horn of Africa States region. Here we must note the strategic location which the region finds itself in, for no fault of its own. It connects Europe, Asia and Africa. It is on the pathway to the Suez Canal and its seaway carries some 11% of world’s petroleum products and nearly 10% of worlds traded goods. No wonder we find the American, the European, the Russian and the Chinese navies and armies in the region and its seas. All of these countries supply most of the weapons used by the armies and irritant militants of the region and all to what end? They remain one of the actors of the game of miseries in the Horn of Africa States region.

Is there an end to this game of miseries? We believe there is. A unity in diversity is a key. Many of my colleagues do argue on the impossibility of an integrated Horn of Africa States but deep down, I know they all believe that it is quite possible to have the SEED countries under one umbrella. This would give them economies of scale large enough to assist them negotiate from a collective point of view and hence strength. This would enable to reduce or eliminate many of the actors in the game of miseries of the region. Terrorism, clan/tribal civil strives, unwanted foreign interferences, peacekeepers, and many miserable NGOs would be done away with. Others would be reduced to manageable issues, such as superpower competition and effects of extreme weather.

The Horn of Africa States region owns substantial wealth and most of all a large youthful population, which can uplift the region if properly deployed. The region has a very long coastal belt, some thousands of kilometers and hence enjoys a large potential blue economy. It also owns plenty of water and cheap energy mostly based on hydropower, solar and even geothermal. It has large farmlands and a lot of meat as the region owns a large livestock population. It would be a good partner for any serious non-regional partner willing to work with them, for the region is, truly, not as violent as it appears to be. Much of the violence in the region, seems to be rooted in the actions and activities of the many actors cited above, which if eliminated and/or reduced, would make the region a beautiful place that offers plenty.

“When elephant bulls fight, it is only the grass that gets trampled”

*Dr. Walhad writes on the Horn of Africa economies and politics. He can be reached at walhad@hornafric.org