The Heads of State and Governments in the Horn of Africa States are representatives of the people of the region. They are, therefore, required to create prosperity for the people of the region in an environment which is peaceful and secure. Despite the huge differences in size and populations among the four countries, there appears to be no significant differences in the levels of development, the poverty levels, the crises, and general stability of the four countries. 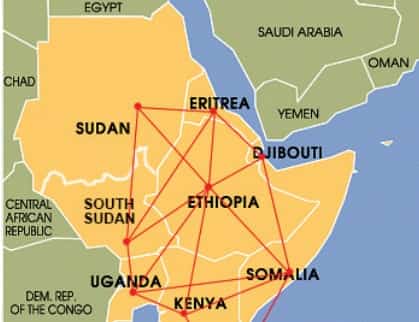 There is a crucial need for the leaders of the region to turn the region into a prosperous, stable, and non-violent region, where unity in diversity, is turned into a positive element instead of unnecessary and violent situations, as has so far been the case. They are further required to pursue mutually beneficial processes, where there is respect for the territorial integrity and sovereignty for each state in the region, but at the same time promote fundamental freedoms of its citizens.The main scope of the Horn of Africa States should be to create and strengthen, first good neighborliness and turn the region into a peaceful, and secondly to work together to develop shared strategies for the stability and development of the region, and thirdly to adopt unified strategies when dealing with international organizations and other countries. It is perhaps, the only way, the region would secure for itself a place in the table of nations.

The four countries of the Horn of Africa States are neighbors, yet on the outside they appear to behave like distant entities that have little to do with each other or compete with and undermine each other like enemies, which only feeds those who have malicious intentions on the region. Many of the people of the region are stuck with the old nationalist notions where each tribe should have its own territory or where some thought that they had natural God-given rights to rule, and all this was and still is the source of the violence, instabilities, and terrorism the region is exposed to and the subsequent food shortages and hunger and the move from rural regions to urban centres incapable of handling large masses of people.

The people of the region do not know each other really and the populations of each country sees the populations of the other three countries as perhaps aliens with intentions on their countries – something far from the truth, although in the past this was the case for some decades. But the region cannot live in the old histories which led it to the present unpleasant situations. Perhaps it is time, the governments of the region allowed their citizens to travel to each other through seminars, conferences and other fora to find solutions for the region’s common multiple problems. This would pave the way for the people of the region to interact and discover each other live instead of each cocooning themselves in their spaces.

After all, the region suffers from the same problems – underdevelopment, violence, climate degradation and food insecurities, political upheavals, terrorism, unnecessary international interferences, massive supply of weapons that only add to the chaos of the region. Discovering each other, the countries of the region, would launch the region to implement ways of ending tensions and crisis and hence the road to lasting stability.

The region is endowed with many advantages that can propel it forward economically, socially and culturally, and even politically. The region enjoys massive land space and massive waters. It is also strategically located and, therefore, is important for the rest of the world. Working together and deploying these advantages would help foster better and faster development. It is why it is necessary that the region’s businesspeople should discover each other and work together, at times creating business conglomerates together, which stand better chances when dealing and negotiating with massive multi-national companies of the world. It is where joint mechanisms and joint cooperation would be beneficial for the region instead of the individual countries emphasizing on their self-importance. Note even the major powers of the world still congregate in massive organizations to draw benefits for their populations. Why shouldn’t the Horn of Africa States do the same?

It is only because they do not know each other really! And this is despite enjoying different branches of the same ethnic composite. An integrated transport infrastructure (rail, road, river transport, maritime transport, air services, etc.) connecting the region to each other, developing the region’s potentially massive hydrocarbon wealth, and the subsequent pipelines for oil and gas and transmission lines for electricity and other energy sources, would contribute to the development of the region. It is why it would be necessary to build an integrated economy for the region. The large land mass of the region and its waters are both sources of indigenous and native foods and working together on food production would alleviate the repetitive hunger cry outs of the region despite the climate changes, which is currently playing havoc on the region.

Would the Head of State and Governments of the region be willing to move in that direction? We believe they should. They should reaffirm to their populations of the need to move forward in the direction of a region working together for the betterment of its populace. It is how the massive economic turmoil of the region could be addressed and the huge youthful population of the region would be made useful and beneficial for the region through regionwide massive employment processes.