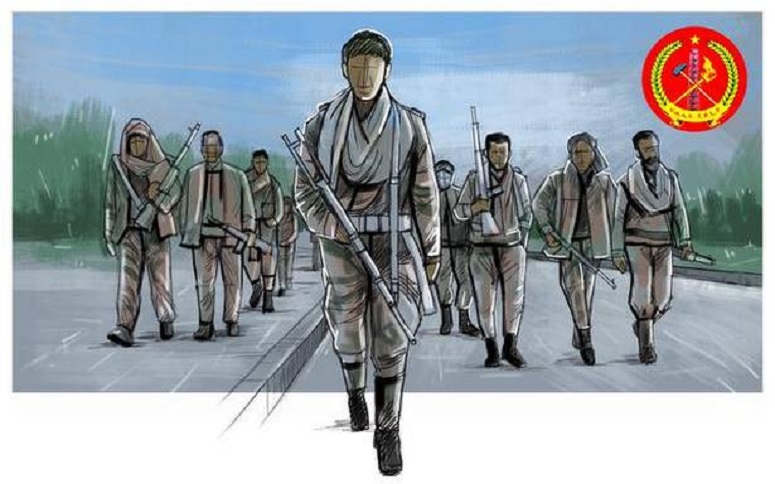 “A nation can survive its fools, and even the ambitious. But it cannot survive treason from within. An enemy at the gates is less formidable, for he is known and carries his banner openly. But the traitor moves amongst those within the gate freely, his sly whispers rustling through all the alleys, heard in the very halls of government itself. For the traitor appears not a traitor; he speaks in accents familiar to his victims, and he wears their face and their arguments, he appeals to the baseness that lies deep in the hearts of all men. He rots the soul of a nation, he works secretly and unknown in the night to undermine the pillars of the city, he infects the body politic so that it can no longer resist. A murderer is less to fear.”
― Marcus Tullius Cicero, a Roman philosopher.

In such struggle for survival, it is certain the selfless die and, die with great honors. It is this greatness, the selfless attitude of the martyrs that propels forward the next generation of patriots to stand in line to defend their mother land and their freedom. Faith unshaken, new leaders take their historical places like their forefathers before them. We learned in our long history that our very survival was due to heavy sacrifices. We know our fathers and mothers faced seemingly insurmountable challenges throughout the ages and yet, they were never vanquished. This gallantry and love of country continues to live in our blood to this day despite incessant attempts by domestic and foreign enemies to the contrary. We had been attacked time and again but we defended ourselves albeit with heavy cost at every turn. We live as free people today thanks to the selfless patriots of our people who defended and died for us all. We are very grateful to those who kept our freedom closer to their heart.

However, the enemy we face today is different from all our ancestors have had to deal with; it is home grown and, as such, among us. They look like us, they speak like us. They pretend to share our sorrows and happiness and yet, they indefatigably work against us, us the Ethiopian people. This is the enemy within.

The woyanes who in all accounts are morally naked, culturally bankrupted are also our political dwarfs of our time. Arrogance coupled with ignorance, they have no sense of history; they have become enemy of the people including those they claim to represent. They played a sinister game to divide and rule, they learnt well from Western colonizers who ravaged Africa and then left it for a perpetual conflict among the indigenous people. Some say Tigreans resented the transfer of power from Tigray to Shoa after the death of Emperor Yohannes but, their Ethiopian identity was never questioned. That is, I believe, true today except the few whose mission is dismantling Ethiopia, besides enriching themselves in the process. We have our own Benedict Arnold in the person of Meles Zenawi who, from the inception, along with his few cohorts concocted this sinister plan of Ethiopian Balkanization. Why they are so fixated on destroying Ethiopia needs a rational response even though there is no rationality with this group. I will leave it to others who might have insight to enlighten those of us who have no clue to this madness.

However, TPLF is dealt a heavy blow, it is not dead but beaten down to dust. But their creations are still lingering like bad cold in every crevices and government hideouts. They spy and pass relevant information to the enemy, they are the enemy within. You have OLF in cities, towns and the countryside but their handlers reside in the Oromo prosperity party. They are government officials paid by the people to kill the people. These people work their hardest to undermine our success, our unity. Treason is a crime in most cases punishable by death. And yet traitors are everywhere in our country that you do not have to look farther than your coworker. What I can say with certainty is that their intent to destroy our country is true as evidenced by their daily actions.
That is why our victory is in the balance, it is the enemy within. It takes commitment and hard work to get in rid of these undesirable but it can be done.

We have an existential crisis but we have also the opportunity to correct it if we have the collective determination to do so, especially good people in the government.

“When there is no enemy within, the enemies outside cannot hurt you.”
Winston Churchill

2 thoughts on “Ethiopia: The enemy within”