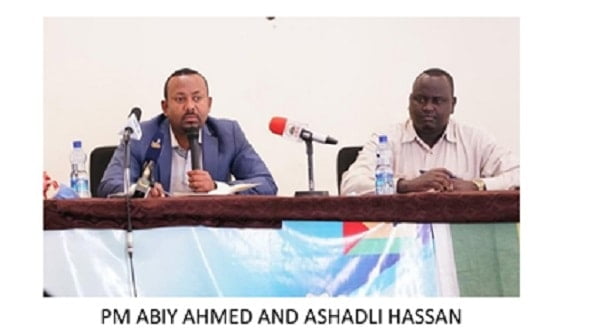 As millions around the world gazed into the night sky to spot the rare conjunction of Jupiter and Saturn, Ethiopians in Metekel were looking up to the sky to plead their God for deliverance from genocidal attacks. For them, the night was a conjunction of all the forces of evil. The night of December 21, 2020. The night their houses were razed to the ground with the residents locked inside. The night the fleeing residents were slaughtered in the forests beyond their burning farms.

On Monday December 21, Prime Minister Abiy Ahmed visited Metekel, Benshangul-Gumuz, site of one of the worst crimes committed against humanity over the last three years. His visit was meant to appraise the situation and recommend solutions for the unrelenting massacres of civilians and the mass displacements. Strangely, the very night after his return to Addis Ababa, hundreds of Amharas were burnt in their homes or slaughtered in the forests as they fled the attacking Gumuz militia. Many ethnic Agaw and Shinasha were also among the victims, the youngest of which was barely six months old.  More than two hundred bodies were buried with excavators in a mass grave. Tens of thousands have become displaced as they fled for their life.

The Elephant in the Room

In the Ethiopian tradition of Qene, ideas are expressed using language that has layers of meanings. Let us borrow this Qene method to look at Dr. Abiy’s visit. Compared to the people who convened with him in Metekel, Prime Minster Abiy is an elephant of a politician. So, we can say there was an elephant in the room.  Considering that his meeting involved pointing fingers at various alleged culprits for the genocide and ethnic cleansing while choosing to avoid naming the main culprit, we can also say it was a case of the ‘elephant in the room’.  ‘Elephant in the room’ is an English expression for a conversation that avoids a controversial and uncomfortable topic that is obvious, with all the participants having knowledge about it. During the meeting held upon Dr. Abiy’s Metekel visit, nobody talked about the real issue, the cause of all the seemingly senseless massacres of civilians from certain ethnic groups.

While it is believed that the Great Oromiya concept and Oromo control of Benshangul-Gumuz resources serve as the main fuel for a conglomerate of armed and unarmed engines of destruction in Metekel, the discussion was deliberately directed towards talks of about the need for peaceful co-existence of the federal ethnic regions. To make matters worse, the nationally televised meeting allowed the airing of a 30-minute long rehearsed and deliberately staged inflammatory hate speech by a former Gumuz cadre disguised as an elder. In fact, this fake ‘elder’ had served as vice-chair of the region under TPLF. Meeting participants were hand-picked and trained by the president of the Benshangul-Gumuz region, Ashadli Hassan, the same person who oversaw the slaughter of hundreds of residents and the displacement of over 50 thousand Amhara and Agaws. The same president, Ashadli Hassan, was allowed by the Prime Minster to chair the meeting and choose speakers among the meeting participants. So, the drama was performed according to the script and the rehearsal, with no surprises. The prime minister did not want to interrupt the unwarranted vitriol against the Amhara region or the inciting and hateful speech against the Amhara. Little wonder then that Abiy Ahmed’s visit to Metekel precipitated an attack of unprecedented devastation.

Before the elephant arrived, there was a lot of grass and brush crushed under, and after the elephant left, more destruction and devastation in the wake.

Who are the killers?

Those that raid the farmer’s villages and kill unarmed and innocent civilians of other ethnic groups in Metekel are armed members of the Gumuz ethnic group. They are the actual killers who wield the machetes, shoot the arrows and fire the guns. Although this has continued for the longest time, the members of the other ethnic groups like Amhara, Agaw and Shinasha are denied the right to bear arms and defend themselves. While the regional police force has been implicated in the massacre, its members participating in uniform, the Army unit in the area has been coordinating its moves so as not to be an obstacle to the massacre and burnings.

Tens of thousands of Ethiopians from other parts of the country have settled in the area three decades ago. However, for the majority of Amhara, Agaw and Shinasha people of the area, Metekel is their ancestral land. The same is true for the Gumuz. The same is also true for the Oromo residents of Metekel. However, since the advent of TPLF to power, with its divisive politics and interest to control the rich resources of the region, it has pitted the Gumuz against the other ethnic groups and used them to ‘clear’ the land of its people. TPLF had brought settlers from Tigray who were converted into investors with forgivable bank loans and dispossessed land. The ethnic cleansing and genocide against the Amhara was carried out during the tenure of WHO Secretary General Tedros Adhanom as TPLF executive member. Today, Tedros Adhanom is leading a misinformation campaign about a non-existent genocide in Tigray and conveniently skips to mention the sad fate of his former comrades in the Ethiopian Gestapo, the TPLF.

Who sponsors the ethnic cleansing today?

With the waning of the TPLF, OLF and its high placed operatives and sympathizers within the ruling party are allegedly working hard to fill the void left by the TPLF in Metkel.

Thus, there seems to be an attempt to systematically Oromize the Benshangul-Gumuz region where the Grand Ethiopian Renaissance Dam, other mega projects, vast marble quarries, various gold mines and a fertile land are to be found. TPLF has drawn all the legal and illegal blueprints and all the OLFites have to do is copy them. In fact, copy them on a much larger scale and a much faster rate is all they seem to be doing. An ethnic Oromo from Metekel in Benshangul-Gumuz, Dr. Girma Amente, has been raised to the highest post in another region, Oromiya, and is reportedly in charge of the demographic engineering project of Oromizing Benshangul Gumuz.  Head of the Regional Benshangul-Gumuz Command Post that is in charge of security and defense is Dr. Alemu Sime. He is also Board Chairman of the Ethiopian Broadcast Agency which is in charge of nationwide news suppression and disinformation. These two serve as good examples of how well-coordinated and synchronized the Amhara genocide machinery is. The same person heading the command post overseeing the massacres in Metekel is in charge of the national body that controls what information and news coverage the public and international community receive.

During its tenure as ruling party, TPLF has used ethnic Gumuz politicians as just fronts while in reality the TPLF controlled every facet of life in the Benshangul-Gumuz region. The TPLF-drafted constitution of the region makes five ethnic groups the owners of the region, denying the Amhara-Agaw majority co-ownership of their ancestral homeland. Consequently, members of these ethnic groups have no voice in the political life of the region and serve as unprotected targets for all sorts of atrocities. Prosperity Party, whose Oromo branch is dominated by OLF sympathizers, seems to be hell-bent to continue TPLF’s legacy, albeit with a replacement of the Tigrayan hegemony with an Oromo one. Indeed, many have been shocked by the speed and intensity of Oromo dominated Prosperity Party’s anti-Amhara and anti-Orthodox pogroms. So much so that an erstwhile staunch supporter of Dr. Abiy and the ‘reform’, has labeled Prosperity Party as the GEP, acronym for Genocide Enabler Party.*

Who are the external players?

Most genocidal and ethnic cleansing campaigns cannot be politically sustained without the support of economically motivated external players. In the case of Metekel or the region of Ethiopia known as the Benshangul-Gumuz, the fact that the massacres have continued despite the change in the government and the ethnic composition of the elite rulers, confirms the suspicion that there are, indeed, international players that meddle in the region for economic reasons. Who these players are, and what their specific economic interests in the region include, is not yet clear. To point at Egypt, with its allegedly negative stance towards the Great Ethiopian Renaissance Dam, as the only external player would be very simplistic.

In this very remote corner of the world, with no access to paved roads, electricity or potable water, it is sad to see innocent unarmed civilians hunted and killed like wild game to be buried in mass graves. The bodies of most do not even get a burial, rotting in the surrounding jungle wherever the fatal arrow struck the fleeing victim. With farms and villages burnt, widespread famine is inevitable; all this farming communities are being attacked during harvest season. Unlike other persecuted ethnic groups from other regions of Ethiopia, residents of Metekel can’t go on a mass exodus to a neighboring country to make their case to the international community.

2020 had been a year of intense genocide against the Amhara people of Ethiopia. We pray that 2021 bring respite to the Amhara and other victims of ethnic cleansing such as the Agaw, Shinasha, Gumayde people and the Konso of Southern Ethiopia.