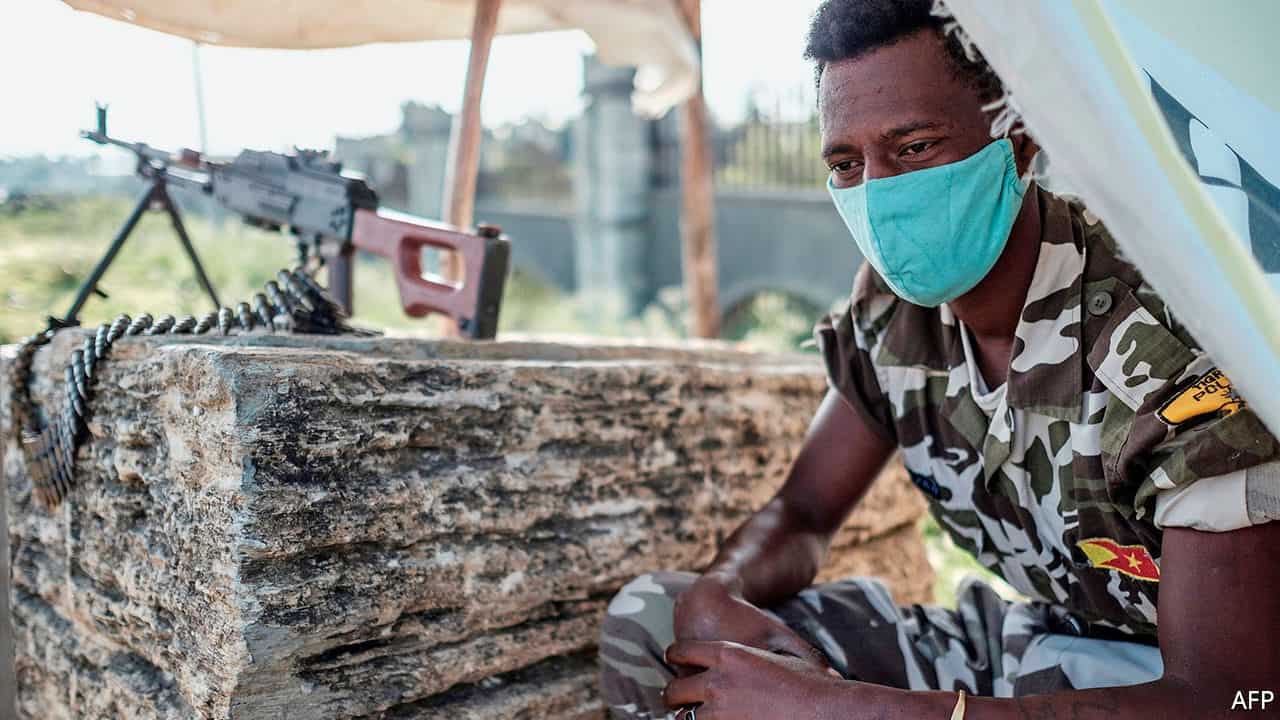 Since seizing the helm of power in Ethiopia in 1991, the TPLF had the undisputed upper hand in the country and dreamt of maintaining this status for a ‘100 years.

Unfortunately (or fortunately in this case!) political events don’t always go according to plan, and when the mass movement in the country was gathering momentum and was spiraling out of control, the place holder Hailemariam was forced to resign from his Premiership as well as Chairmanship of the EPRDF, dashing their hope.

Though not anticipated, but just to cover all bases, the old guard leadership of TPLF had earlier promoted the sycophant Shiferaw Shigute to be the Head of EPRDF Secretariat in an effort to position him to be the next Chairman of EPRDF, and hence the Prime Minister.

However, upon Hailemariam’s resignation, the ODP and the ADP with support from SEPDM were able to out-maneuver the TPLF old guard and elect Abiy of ODP to be the Chairman of EPRDF, and hence the Prime Minister in March of 2018.

Abiy’s ascendance to the Premiership of the country and his Chairmanship of the EPRDF sent shock waves to the old guard that had been accustomed to having their say in anything of consequence occurring in the country let alone the highest political position.

The unease and disappointment of Abiy’s ascendance coupled with his seemingly universal acceptance by the Ethiopian people signaled to the old guard, their dominance has ended and they were being relegated to the sidelines; and this they could not accept.

Barely three months after Abiy took power, at a mass rally held in Addis Ababa, a grenade and bomb attack occurred in a failed assassination attempt, which nonetheless killed three people and injured 160.

The new Prime Minister as well as his government accused the ex-spy chief Getachew Assefa a member of the TPLF old guard, who was relieved of his duties soon after Abiy’s election, and who had hurriedly left the capital for Mekele, without so much as an orderly transfer to the incoming head.

An effort by the Federal Government to execute a warrant for his arrest was thwarted by the Tigrai regional government. Federal troops sent to Tigrai to apprehend and extradite him to Addis to face charges were instead detained by Tigrai Special Forces, and their release had to be negotiated. This of course was an indication that the relationship between the region and the Federal Government was going to be problematic, to say the least.

To make matters worse Abiy accelerated the reorganization of EPRDF that had been talked about for years but was never implemented, bringing the so-called ‘agar parties’ or ‘partner parties’, who in actual facts were excluded from the leadership, into the center.

Recognizing that this move will severely curtail their dominant position within the coalition, the TPLF old guard refused to continue their membership in the coalition and the coalition minus TPLF eventually evolved into the new ruling Prosperity party.

Once the old guard’s removal from the center of national power and its being relegated as merely a regional grouping became evident, it accelerated its disruptive activities by surreptitiously financing and organizing any and all opposition elements to the federal government, who went on a murderous rampage in several parts of the country.

While engaged in such destructive activities to create a sense of instability in the country on one hand, they were also officially trying to organize disgruntled and extremist ethno- nationalists into what they called ‘Federalist forces’ as a counter weight to the governing coalition.

These efforts to undermine the Federal government by the two-pronged approach created a sense of insecurity in the country and as a result even began to erode the near universal support Abiy’s government was able to garner at the beginning of his term.

Despite this setback Abiy’s government refused to be dragged into the squabbles being hatched by the old guard and focused on consolidating their position in the center.

However, as if these problems instigated by the old guard and other inherited problems from the past were not enough, the COVID19 epidemic through a monkey wrench into the political process.

On March 2020 the Electoral Board reported to the Parliament that the epidemic had forced them to suspend their activities, and their ability to conduct the national elections on August 2020, as stipulated in the constitution was not possible.

Faced with this predicament presented to it by the Electoral Board, the Parliament sent a request to the Council of Constitutional Inquiry to advise it on how to proceed, and based on the Council’s recommendation, postponed the elections until a conducive environment obtains, which will have to be certified by the Ministry of Health.

Having failed on its other disruptive activities, the old guard of TPLF seized on this opportunity and claimed the decision to postpone the elections and extend the government’s mandate by Parliament was unconstitutional and therefore unacceptable. Further, they claimed Abiy’s administration will be an illegal government, come October 5, 2020, and as such they will not recognize it.

While accusing the Parliament and the government of constitutional transgression however, they themselves declared a de-facto state, went ahead against the expressed prohibitions in the Constitution and established a local electoral board and conducted an election which they claimed to have won by over 98 percent.

Having conducted the election, nay with hardly any change of personnel, the old guard of TPLF went into a full throttle propaganda campaign to undermine the Federal government.

One of the longest serving Ethiopian Foreign Ministers (not by merit!) and a member of the old guard Seyum Mesfin unleashed a campaign of disinformation against the Federal Government and a character assassination of Abiy himself, in the many interviews he gave to several TV stations in Tegrai.

Accusations by him and other old guard representatives ranged from an accusation of selling the GERD to Egypt, to colluding with other foreign governments to undermine the sovereignty of the country and its constitutional order to Abiy being a traitor…etc

In an interview conducted in English with Tegrai Mass Media Agency on October 12,2020 Seyoum addressed Abiy as ‘former Ethiopian Prime Minister’ and went on to say that ‘Abiy has allowed Issayas to rape Ethiopia under the guise of cooperation’… He went on saying, ‘Let Issayas and Abiy make no mistake that the Ethiopian people will be observing this from the sideline…  The early removal of these actors is a must, because it will complicate the other situation of the country’.

This heightened propaganda campaign was an ominous sign that something was afoot, though one was not sure as to what it would be.

On October 30, 2020 a General appointed by the Federal government to a post in the Northern Command was refused entry upon arrival at Mekelle Airport and sent back to Addis.

The TPLF leaders proclaimed that his appointment was not ‘legitimate’ further saying that Abiy’s Federal Government has no authority to ‘any appointment or troop movement’ and that it is ‘totally unacceptable’, it was clear that things have degenerated and that danger was looming.

On November 3, 2020 the TPLF old guard ordered an attack on the Head Quarters of the Northern Command in what they later described as a ‘blitzkrieg’ attack, killed as yet an undisclosed number of commanding officers and soldiers, held others hostage and took control of the Northern Command’s arsenals and military equipments.

Emboldened with this measure they proclaimed that they have acquired the capability to attack any one and anywhere in the region let alone the Ethiopian Defense Forces, and that they have become a force to be reckoned with.

A parallel event in the context of the United States to this brazen attack on the Ethiopian National Defense Forces by the Tigrai Special Forces, will be akin to the North Carolina National Guard attacking Fort Bragg, killing commanding officers, mass incarcerating the bulk of the troops and claiming all the armaments as its trophy, and threaten one and all.

We all can be sure what the response of the US Government would be, and no pundit, journalist, independent analyst, country or multilateral organization will suggest the US government sit and negotiate with the North Carolina National Guard, conduct ceasefire or settle differences on the negotiating table.

One can not be sure about the motivations behind such a brazen attack on ones own national army, but if we are to believe what the Chief of Staff of the Army had to say,

it was to be an attempted putsch.

Tibor Nagy Asst Secretary of State for African Affairs seems to concur with the views expressed by the Chief of Staff when he said …‘ difficult to tell motivation, but it seems like they were doing this more to depose the prime minister from power and to reassert themselves into the prominent position that they had atop the Ethiopian political spectrum for the last 27 years.’

Faced with this treacherous action against the nation by the old guard of TPLF, the Federal Government said it was left with no option but to engage in what it called an “unexpected and aimless war” that caused tremendous hardship and a great loss of life, besides destroying factories, houses and infrastructure in the region.

The human cost in the war theater itself and the untold misery it has caused to the civilian population in areas of combat as well as those forced to seek refuge in a neighboring country is too high a price to pay.

The Ethiopian government declared that essential combat was completed on November 28, and what remained was essentially a mopping up operation to be conducted by the Federal Police and other agencies. However, going by some of the government’s own press conferences, a month after this declaration there still seems to be some low-level military skirmishes.

The longer these skirmishes continue, and the uncertainty of the whereabouts of key figures of the leadership will create a fertile ground to those elements who want to maintain the fiction of a robust resistance to the federal government.

The campaign of misinformation by diehard supporters of the TPLF leadership, western journalists, academics and activists which aims to create a competing narrative is something that needs to be countered, and should not be taken lightly.

Daily updates from the government in not only press conferences for domestic consumption, but engagement with the international community in print and social media is an absolute necessity.

Ethiopia can ill afford a war of any duration, and establishment of a level of normalcy where people of the region can lead their normal lives, and where peace prevails is an absolute necessity, and it is incumbent upon the government to work to such end expeditiously.