A number of people have died in further fierce fighting in the Somali capital, Mogadishu, between Islamist militants and government forces, officials say. 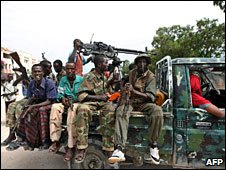 The conflict comes despite a call by President Sheikh Sharif Sheikh Ahmad for a ceasefire during the Muslim holy month of Ramadan.

Some of Saturday’s fighting centred on a strategic road linking the capital with the town of Afgoye.

A government official said 10 Islamist fighters had been killed.

The Somali Minister of State for Defence, Yusuf Mohamed Siyad, said on Saturday that the final number of militants killed in the operation was not known.

“They left behind some dead bodies and took others. They also took some of the injured militias – for that reason we do not have the exact number of their casualties.”

The road to Afgoye is used to transport supplies to camps where tens of thousands of displaced people are living.

At one point in the fighting, the militants also came close to the presidential palace.

According to local media reports, each side accused the other of starting the fighting. A number of civilian deaths and injuries were also reported.

On Friday, more than 20 people were killed in Mogadishu in heavy battles between Islamist militants, who are fighting to overthrow the government, and African Union peacekeepers.

Thousands of civilians have been killed and more than a million driven from their homes because of fighting in the past two years.