May 24, 2021
Ethiopian Embassy in Washington DC

The Government of the Federal Democratic Republic of Ethiopia finds it unfortunate to learn about the decision by the United States to continue exerting undue pressure on Ethiopia by imposing visa restrictions on Ethiopian officials. This is in addition to its previous decisions to restrict economic and security assistance to Ethiopia. In this regard, the Ethiopian Government would like to state the following points:

This decision came at a time when the Ethiopian Government has been engaging positively and constructively with the U.S. administration on issues of common concern. This was the spirit with which the Ethiopian Government welcomed the new U.S. Special Envoy for the Horn of Africa, Mr. Jeffrey Feltman, who met and held extensive consultations with senior government officials, including the Prime Minister.

It also sends a wrong signal at a time when Ethiopia is gearing up to hold national elections, which is expected to usher in a new political dispensation in the country. The 6th National Election would pave the way for an inclusive dialogue once a new government assumed office. Hence, at this important juncture, the Ethiopian government was expecting support and understanding and not such kind of ill-advised measures to unnecessarily overshadow the elections.

Ethiopia attaches great importance to its historic and friendly relationship with the United States which has stood the test of time. That is why the government finds it extremely regrettable that the implications of the visa restrictions and other related measures taken earlier will seriously undermine this longstanding and important bilateral relationship.

What is even more saddening is the tendency by the U.S. administration to treat the Ethiopian Government on an equal footing with the TPLF, which was designated as a terrorist organization by the House of Peoples’ Representative two weeks ago. There is nothing more revealing than this to understand the misguided approach by the administration.

The Ethiopian government has been consciously working to promote national dialogue through a series of engagements with wider sections of the Ethiopian society not because it was pushed from outside, but because it believes that this is the right thing to do to build the necessary national consensus in the country and chart out a better way forward. But it should be understood that the government cannot be compelled to sit down and negotiate with the TPLF, which has already been labeled as a terrorist organization, and any sort of attempt to resuscitate the terrorist group would be counterproductive and untenable.

As the Ethiopian Government has made it clear, time and again, the attempt by the U.S. administration to meddle in its internal affairs, is not only inappropriate but also completely unacceptable. Ethiopia should not be told how to run and manage its internal affairs.

As far as alleged human rights abuses committed in the Tigray region are concerned, the Ethiopian government is fulfilling its commitment to hold those responsible accountable. The Federal Attorney General’s Office has announced the outcome of its investigative work and the important steps taken towards ensuring accountability and justice. The Ethiopian Human Rights Commission and the United Nations Office of the High Commissioner for Human Rights (OHCHR) have already embarked on their joint independent investigation. Upon the invitation of the Ethiopian government, the African Commission on Human and People’s Rights (ACHPR) is also undertaking its investigations.

Furthermore, the Ethiopian government has not only demonstrated its willingness and commitment to work with the international community to respond to the humanitarian crisis in Tigray, but it has also provided full and unhindered access for humanitarian actors to operate in all parts of the region. It’s been doing all it can by mustering its meager resources and that of partners to reach out to all people in dire need of urgent assistance. The humanitarian actors operating on the ground know full well that the challenge at hand is related to issues of capacity and additional resources and not so much about access.

After the series of engagements with international partners, including the U.S., and the tangible progress made in addressing some of the prevailing challenges, the decision by the U.S. administration to impose visa restrictions and other measures is not only regrettable but will also seriously harm and undermine the constructive spirit of engagement and the significant gains achieved on the ground, not to mention the centuries-old people-to-people relationships.

If such a resolve to meddle in our internal affairs and undermining the century-old bilateral ties continues unabated, the government of the Federal Democratic Republic of Ethiopia will be forced to reassess its relations with the United States, which might have implications beyond our bilateral relationship.

The Ethiopian government will not be deterred by this unfortunate decision of the U.S. administration. It will continue its relentless efforts to overcome current challenges and lead the country on the path of lasting peace and prosperity. No doubt, the task ahead is daunting, but with the support and unity of our people, we remain confident that we shall overcome our difficulties and realize the hopes and aspirations of generations of Ethiopians for a peaceful and prosperous Ethiopia. 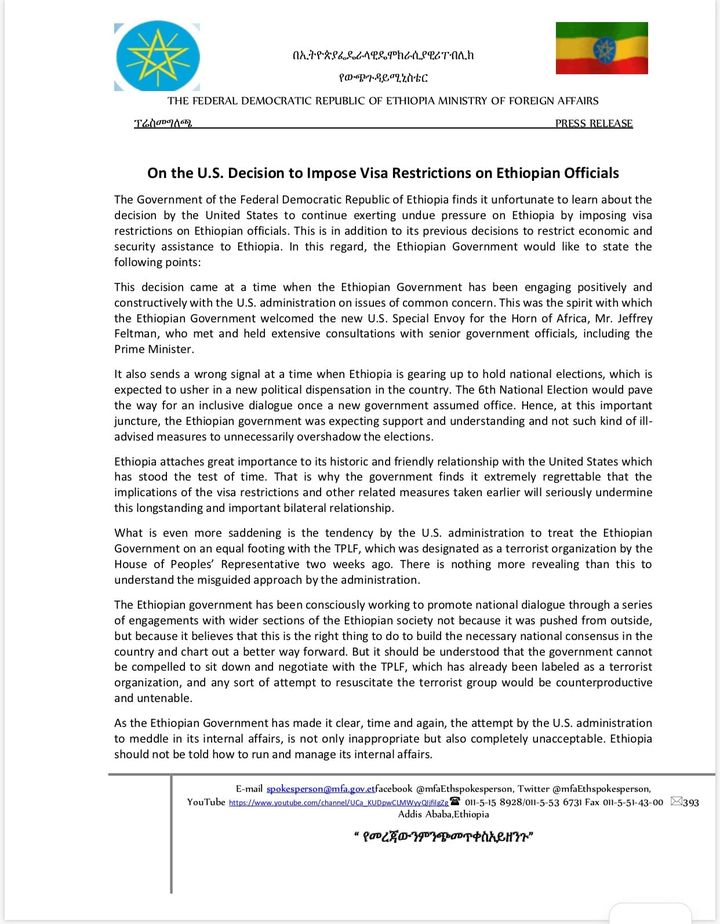 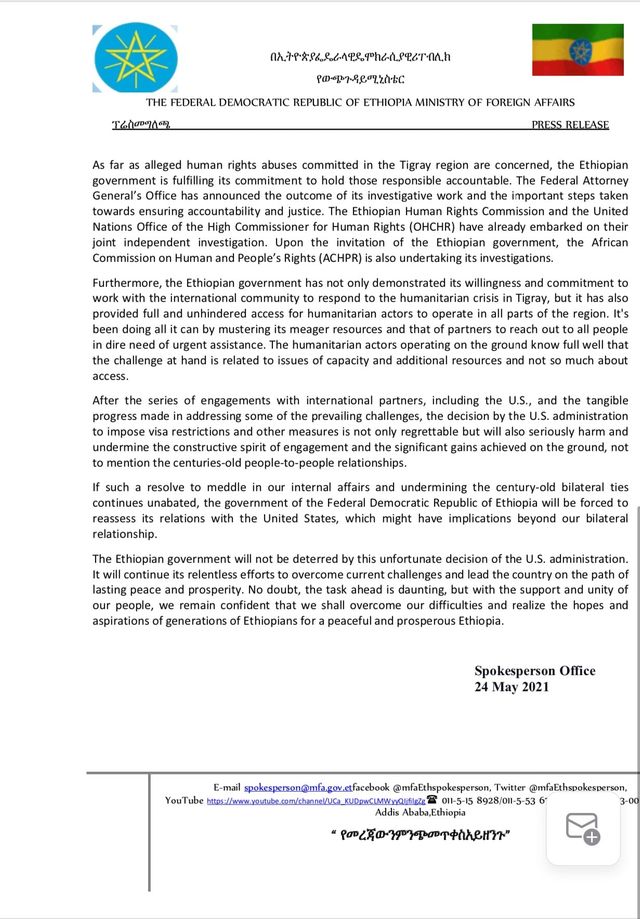