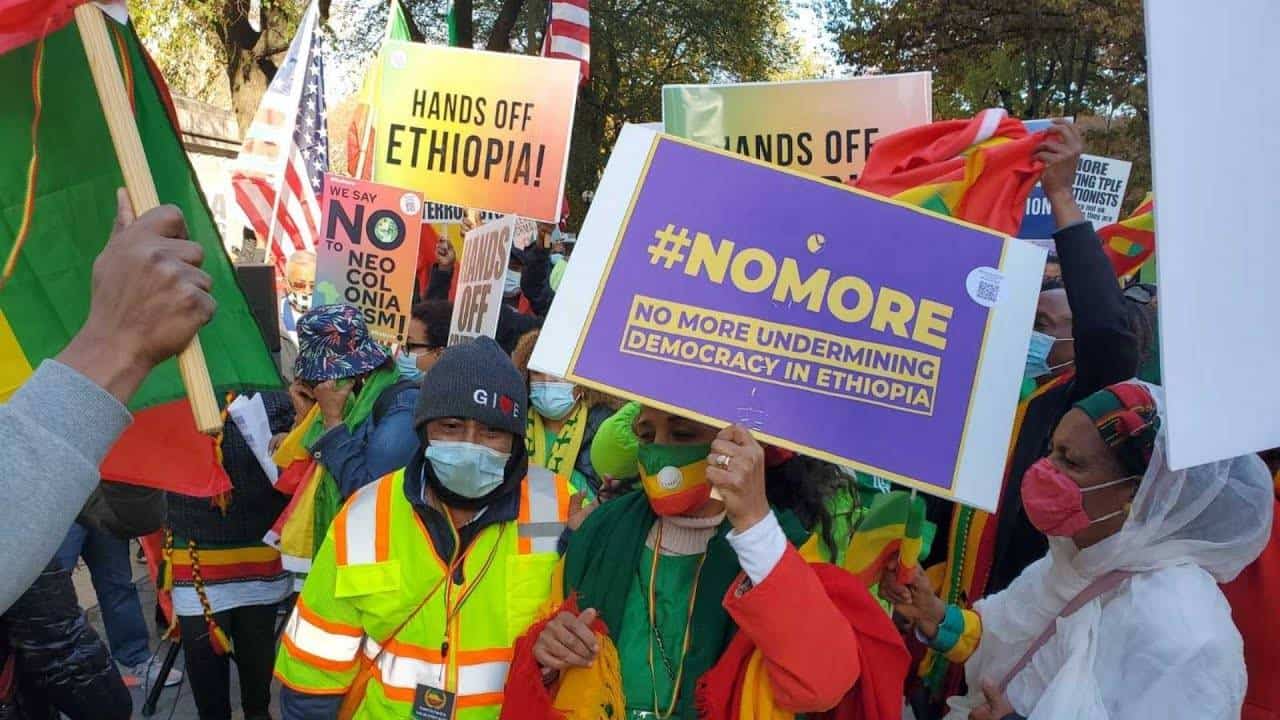 The idea of “No More,” even if these two words were not used as they are now, has a long African history. It is the idea of “No More” colonialism and neo-colonialism that nourished African liberation. That’s why the current slogan “# No More” has touched a sensitive cord among Africans, African Americans, and formerly colonized people. With this as a background, I will limit myself to the presence of the idea of “No More” in Ethiopian history. Treating the slogan historically enables us to bring to light the dangers that await it and the need to transform it into a long-term project in the post-war period.

“No More” in Ethiopian history

The idea of “No More” erupted to the surface in the 18th century with Emperor Tewodros. He believed that Ethiopians should “no more” depend on the West for goods and weapons. He thus embarked on a campaign of modernization, a project that met powerful internal and foreign resistance. When the British intervened to stop his project, he chose to sacrifice his life to his idea of “No More” rather than give it up. Once more, lacking people to pick up Tewodros’s project to modernize Ethiopia, the idea of “No More” sank back into “surplus history.”

The idea of “No More” reemerges in the 19th century with Ethiopia’s resistance to the West’s and particularly Italy’s colonial ambitions. The 1896 victory of Adwa over Italy symbolizes the idea of “No More” to Europe’s threat to Ethiopia’s sovereignty. But Emperor Menelik failed to grasp that “No More” had to be pursued in the post-victory period in order to make Ethiopia a powerful nation that the West will never dare threaten again. Unfortunately, he resorted to the old ways of doing things, thus amputating the “No More” that made possible the Adwa victory of the new historical possibilities it opened. In the meantime, Italy developed the means she needed to defeat Ethiopia in 1936.  We could say, as unpalatable as it may be, that the 1896 Ethiopian victory gestated the 1936 Ethiopian defeat.

Again, the idea of “No More” emerged to the surface in the 20th century, embodied in the Ethiopian students’ movement against the oppressive Imperial regime. This glorious and altruistic movement sabotaged its powerful “No More” by resorting to ideas borrowed from Western history of social and political transformations, as if Western history were the ideal model that all other histories have to follow. The idea of “No More” lost its compass and Ethiopia gave birth to two political monsters: the homicidal Derg and the genocidal TPLF.

Indeed, one finds the idea of “No More” in Ethiopian literature. The great Ethiopian writer, Addis Alemayehu narrates in his novel, Yälm Zat, the tragic outcome of Tekeste Tamrat’s Western schooling. Addis argues that “education is the second mother of man,” and that the liberation of Ethiopians will fail if their modern education is not based on the idea of “No More” to the “cognitive imperialism” of the West. Such a “No More” requires simultaneously a careful labour of critical interpretation of our multiple intellectual traditions, as a recent study of Ethiopia’s intellectual traditions shows (Qiné Hermeneutics and Ethiopian Critical Theory, 2021). This does not, however, exclude the ideas of other civilizations. Rather, it demands that we treat them critically as “raw material” that we cook, chew, digest and transform in light of our needs. Only then could we appropriate the results in ways that invigorate the “No More” to oppression and enhance Ethiopian’s political and economic development and sovereignty.

Unfortunately, the “No More” that emerged in the 20th century did not heed Addis’s perceptive analysis of the dangers of modern Ethiopian education that is not based on “No More” to the “cognitive imperialism” of the West. Consequently, the practitioners of “No More” in the 20th century opted for what an Ethiopian academic calls “Gibbonism” (academia. edu): the propensity to look at Ethiopian history, society, and issues through the eyes of the history of the West and its West-centered philosophical, sociological, and political concepts, leading some to claim, for example, that “there is no Ethiopian nation.” Gibbonism neutered the idea of “No More,” transformed its practitioners, in the words of Addis, into “mimic men,” incapable of long-lasting emancipatory projects. Hence, the failure of the “No More” that emerged in 20th century Ethiopia. Out of this failure emerged the Derg and subsequently the TPLF.

Again “No More” emerges in 2021. This time it is explicitly formulated as “#No More.” The current “#No More” is a response to a crisis that has a double dimension: internal and external. The internal dimension is generated by the TPLF’s political practice, which should be described using the concept of Achille Mbembe, the Cameroonian philosopher, as “necropolitics”: a politics driven by “who matters and who does not, who is disposable and who is not,” calculated in terms of ethnic identity.

Neither in the past nor in the present have Western countries, UNESCO, WHO, and other UN agencies condemned these heinous acts. I invite the reader to ponder on why the American and European governments, and the UN and its specialized agencies adopt the posture of the proverbial three monkeys: “see nothing,” “hear nothing,” “say nothing.” Isn’t their silence in the face of TPLF’s necropolitics a crime against humanity? Yet, these governments and organizations constantly weaponize the issue of “human rights” against Ethiopia despite the fact that the government is cooperating with the Office of the High Commissioner for Human Rights in the investigation of reports on human rights violations.

The external dimension of the present crisis is caused by the West’s neo-colonialist behaviour: it tells Ethiopia that it knows what is best for her and that if she does not follow its dictates, it will punish her through sanctions and by fomenting unrest in the country. In particular, the American government seems to treat Ethiopia with its sanctions the same way that Derek Chauvin treated George Floyd with his knee. Colonialism may be dead, but its spirit is still very much alive in Washington, London, Paris, Brussels, and the European Union.

It is in response to this unique double-barreled crisis that the “# No More” movement emerged. The present crisis is a historical turning point that confronts Ethiopia with a fundamental threat and a fundamental choice: Either Ethiopia succumbs to the threat and accepts a historical regression that allows the necropolitical TPLF to return to power and makes Ethiopia America’s puppet state, or she chooses to fight, defeat the TPLF, undo once and for all its necropolitics, and usher in a “new time,” to use the language of the Chronicles of Lalibela, of democracy and prosperity. The present “# No More” works for the latter type of exit from the crisis.

Some may try to coopt the “# No More” movement by arguing that the crisis could be resolved in a piecemeal fashion, by entering into negotiations with the TPLF and finding a modus vivendi that will allow it to survive as a political party with the possibility of participating in power.

A piecemeal solution presupposes a commonly shared normative understanding of the parameters that structure and articulate the society in which we live. When Obama declared on January 20, 2009, “we are in the midst of a crisis” (the 2008 financial collapse), he was talking within the parameters of what America is and should be that Americans—democrats and republicans—shared such that piecemeal solutions, which are essentially technocratic, were sufficient to resolve the crisis. Resolving the crisis did not require changing the very parameters of what America is.

But such is not the case in Ethiopia. The TPLF is structurally, ideologically, psychologically, and politically wedded to necropolitics, whereas Ethiopians are massively committed to democracy, as the current events demonstrate. The TPLF and Ethiopians have irreconcilable visions of politics, and of what Ethiopia is and should be. The “# No More” symbolizes and expresses this irreconcilability. It considers the unconditional exclusion of the TPLF from Ethiopian politics absolutely necessary for building a democratic Ethiopia in the same way that the total exclusion of the Nazis was a necessary condition for building a democratic Germany. “# No More” asserts that piecemeal solutions cannot resolve the present Ethiopian crisis.

First, limiting the “# No More” to achieving victory over the TPLF is to forget that the hatreds, divisions, resentments, and destructions that the TPLF has created will still be with us for years to come. These will surely create societal problems that we have to deal with in ways that do not undermine Ethiopia’s democracy. Second, the ethnic poison that the TPLF has injected into the arteries of Ethiopian society will not disappear immediately because the TPLF is defeated on the battlefield. It will continue to provoke side effects that could create political disruptions. I have discussed these issues in a previous post (Reflections on Post-War Issues in Ethiopia).

Third, the West, having failed to use the TPLF to subjugate Ethiopia, will probably adopt negative measures to prevent Ethiopia from engaging in a peaceful and vigorous reconstruction and try to force her to submit to its interests through economic and political pressures. In particular, the defeat of the TPLF will not stop the US government from meddling in Ethiopian affairs and pursuing its efforts to make Ethiopia a client state. On all counts, the need for “# No More” goes beyond the battlefield victory over the TPLF. Ethiopia needs “# No More” as an enduring movement.

“#No More” should continue to be active until we have succeeded to build an Ethiopia whose economy and democracy are robust, an Ethiopia in which each and all Ethiopians feel respected, free, and at home anywhere and everywhere in Ethiopia. Such an Ethiopia will command respect in the world and will no longer be subject to neo-colonial blackmail.

1 thought on “#No More and Post-War Ethiopia”