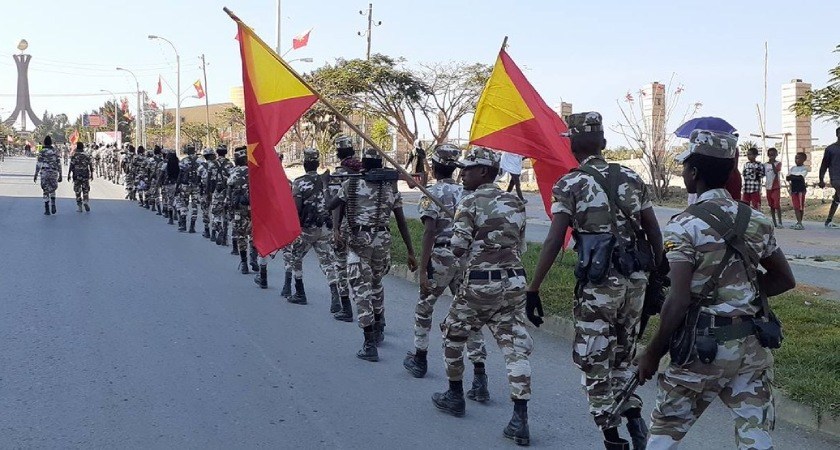 The Major General who was sent by the Chief of  Ethiopian Defense Force (EDF) was  returned back from Alula Abanega International Airport in Tigray today.
TPLF has made it clear that it will not recognize the Abiy Administration It labelled as illegal. Today returning of the general from airport is not unexpected.
The next move by the Abiy administration is not clear. Abiy has tried to avoid direct conflict with TPLF for the last two and half years.
EDF is now held hostage by TPLF for all practical purposes. The Commander in Chief of the EDF, Abiy Ahmed is now cornered by TPLF. He has to abandon the army or take control of the army.
Abandoning the army means leaving all the military equipments and airlift the soldiers which is a big win for TPLF.
The other option is buldozing its way out of TPLF’s Tigray. The people of Tigray will be told to block streets to stop the army movement.
This dangerous game that started by TPLF can have days or month to be played around because the longer it goes the more divided the army will be on tribal line which is certainly will force the EDF to send air and ground forces to rescue its force.
TPLF main goal of starting a “liberation” war will either open a new war or will end up to be the end of TPLF. Tigray will be free from more than four decades of totalitarian mafia group of families from Adwa.
Abyi administration can not backdown from this confrontation because Ethiopia is going to have election in spring 2021.
GERD test for Abiy Ahmed is coming next July to September.However,  the TPLF current test is even much serious than GERD filling next summer.
War can only be avoided if the TPLF war mongerers get  a warning from African Union that no country will recognize the Tigray Republic through war or otherwise.
Read Aloud:   Ethiopia: Limerick raised actress Ruth Negga shortlisted for Golden Globe award