In May 2005, the ruling Ethiopian Revolutionary Patriot’s Democratic Front won elections amid allegations of electoral fraud and a campaign of intimidation against opposition groups. Six months and two protests later, nearly 200 civilians were killed and tens of thousands arrested, including high profile opposition leader Birtukan Mideksa. The former judge and popular politician was initially jailed for life, then pardoned, and then commanded to serve out the rest of her sentence.

Next year, Ethiopians will go to the polls again, and the political maneuvering is already underway. Last week, the Sudan Tribune reported on the Meles Zenawi government claims of an alleged coup plot masterminded by former opposition leader Behanu Nega, now an academic in the United States of America. And on May 27, the opposition Unity for Democracy and Justice (UDJ) had their permit application for a protest against the Zenawi government in Addis Ababa’s Meksel Square rejected by the city’s administration. A spokesman for the UDJ, Hailu Araya, was quoted as saying the government continued to play political games, thus weakening the UDJ’s effectiveness in the country.

Ethiopia is an important ally for the United States. Its strategic location near the Horn of Africa makes the country key to Barack Obama’s attempts to win the War On Terror.

Against the backdrop of the 2010 election, the documentary Migration of Beauty is due for release on the international film festival circuit. Directed by Chris Flaherty, the film recalls the experiences of Ethiopian genocide survivors of the 1970s and the community activism led by the Ethiopian diaspora in Washington D.C. in the run-up to the 2005 election. Flaherty spent two years researching and befriending the witnesses involved in the historic event covered in the film. Migration of Beauty has screened at the AFI Institute in Maryland and Goeth-Institute in Washington D.C.

The Ethiopian government has sent a chilling message to all opposition groups by declaring that it will achieve peace at all costs, a clear reference to the crackdown on protests that tainted the election four years ago that also revives haunting memories of the Dergue’s massacre of students and other civilians in the 1970s. Although the country is not officially a one-party state, the signs of political intimidation risk leading the nation along the path of Burma and Zimbabwe into tyranny.

Chris Flaherty spoke with David Calleja in an interview for Foreign Policy Journal about what could be in store for sub-Saharan Africa’s second most populous country.

Four years after the violence that occurred in the aftermath of Ethiopia’s general elections, what news do you have of the mood in the country, and how do you think this will affect the lead-up to the 2010 poll?

Obviously I have been keeping track of recent events as they relate to the upcoming Parliamentary election in Ethiopia. I would have to say that at this point it looks pretty grim. I think the party in power has been doing a good job at intimidating any possibility of viable opposition against themselves in 2010. With the re-arrest of one of Ethiopia’s strongest opposition leaders, Birtukan Mideksa and the recent announcement by the Ethiopian government that they have launched an investigation against people suspected of overthrowing the government, the prospects look grimmer by the day. From what I have observed many Ethiopians appear to be slipping into a feeling of helplessness. Many are saying, “Here we go again, this government will stop at nothing to retain power.” The biggest fear for me is that Ethiopians will simply give up and accept what happens no matter how illegitimate the outcome.

What factors compelled you to make your documentary Migration of Beauty? Why did you feel that it was necessary to tell people what happened in the 1970s under The Dergue as a prelude to the 2005 elections?

Perhaps the biggest factor that helped me mold the idea for Migration of Beauty was the inspiration I experienced from documenting seemingly powerless immigrants from a third world country engaging the U.S. political process. During the filming I was able to better understand the conditions that drove many of them to zealously fight for ideas that most ordinary Americans take for granted. My approach was to tell their deeply personal human stories about struggling for freedom and dying for it. Some of the people in the film lived through one of the most horrific chapters of Ethiopian history, the “Dergue” period or the “Red Terror”.

By bringing their stories to light I was trying to make clear that it doesn’t matter who takes away your freedom as much as it is criminal for anyone to do such a thing. If your freedom has been taken away the end result is always the same no matter who takes it away, whether it’s Adolf Hitler, Mao Tse-Tung, Mengistu Haile Mariam or Meles Zenawi. And while the current Prime Minister of Ethiopia, Meles Zenawi, has not committed acts as open and obvious as his predecessor Mengistu Haile Mariam, he is still repressing democratic ideas and has committed numerous human rights abuses. It was important for the Ethiopian Americans in Migration of Beauty to connect both stories. They have seen it all before.

There were some moments in the documentary in which you were prevented from filming. Who was behind the threats and what level of intimidation did they offer to the crew or yourself?

I did B-roll filming in Ethiopia directly after the 2005 election massacres. There was a certain tension in the streets. Foreign journalist and filmmakers are highly suspect in the eyes of the Ethiopian government. The Ethiopian government has a long history of repressing the media so I expected I might run into problems. There were two instances where I and my Director of Photography were stopped by the police. The first time I managed to talk my way out of potential arrest by speaking in Amharic and smoothing my way out of the situation. The second time it was the Ethiopian Army that tried to stop us. I quickly discovered that they did not speak Amharic, therefore my language skills yielded no results. I could not understand what they were saying but it was obvious they wanted the video camera. My DP and I simply took off running. For whatever reason they stopped following us and we lost them. We quickly realized that we had to keep our equipment “under the radar” and out of sight. I have heard of worse stories involving intense harassment and arrest of video camera operators. There is one such instance documented in my film. 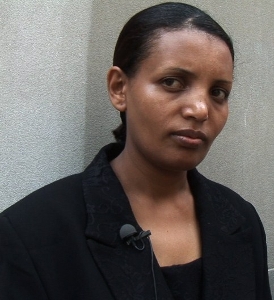 Last year, the opposition leader Birtukan Mideksa was jailed for life. According to a Voice of America report, Prime Minster Meles Zenawi government’s official line was that “she had not asked for the pardon” handed to her. What do you think is the real reason for the order to serve out her life sentence? What does Meles Zenawi have to fear from her?

The situation of jailed dissident Birtukan Mideksa is a very interesting one. The former District Judge represented the biggest threat to the party currently in power, the Ethiopian People’s Revolutionary Democratic Front (EPRDF). And while she was jailed for what would appear to be rather “convenient” technical reasons it’s obvious to me that she was put away because there was a good possibility she would beat the EPRDF in a fair election. Considering what happened in 2005 the ruling party appears not to be taking any chance of losing a national election. This is an old story and a proven formula: intimidate, jail and kill all of your viable opponents in order to keep power. No matter how proper and clean everything appears on the surface it’s all the same.