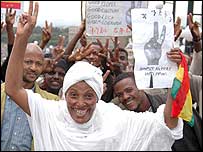 Security forces fired teargas and shot in the air to scatter hundreds of demonstrators who formed makeshift barricades, hurled rocks and smashed windscreens in central Addis Ababa in protest against a May poll the opposition says was rigged.

Special forces backed by four armored personnel carriers deployed in the volatile Mercato area, where violence erupted on Tuesday, and sealed it off from the rest of the city.

The violence, the second straight day of unrest in the capital, brings to 31 the number killed in the past two days.

A Reuters reporter saw police round up dozens of people and bundle them into two pickup trucks.

“We are protesting because the government stole the election. People are angry because the police are very cruel,” said Ghebremichael Ayele, dragging pieces of wood to block a road leading to the capital’s biggest hospital. 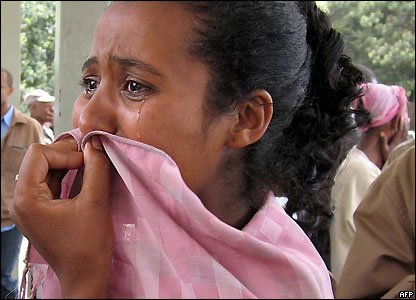 In the hours after Tuesday’s clashes security forces arrested the CUD leadership, saying it orchestrated the violence, widely seen as evidence of persistent political tensions in sub-Saharan Africa’s second most populous nation.

In June post-election clashes killed 36 people in Addis Ababa, an opposition stronghold, in the capital’s worst violence since bloody but short-lived student riots in 2001.

Foreign observers broadly endorsed the official results, but noted some irregularities in the election. 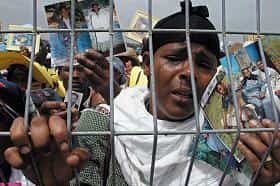 Once feted by Western leaders as part of a “new generation” of African leaders pursuing pluralism and clean government, Meles’ democratic credentials have come under growing scrutiny over the election wrangling and his crackdown on civil unrest.

Meles has repeatedly accused the opposition of plotting to incite violence and topple his government. He says he will not accept any threat to security in the country of 77 million.

“The government used excessive force,” he told Reuters. “We are sitting on a time bomb. It exploded yesterday. It could explode again a week later or a month later.” 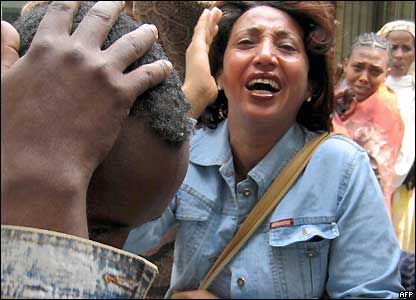 At the hospital, a relative of one of the dead, Dawit Tesfaye, said: “The problem we have is that he (Meles) wants to stay in power by force. That’s why they are killing my family.”

“The violent situation is continuing in some parts of the city, but it’s not a big challenge to the government,” he told reporters, blaming the CUD for instigating Tuesday’s clashes.

The political deadlock in Ethiopia prompted the European Parliament to warn last month of possible cuts in development aid to the donor-dependent country unless there was an end to the “persecution and intimidation” of opposition groups.