A few months ago, I wrote a brief article entitled “Awassa too Belongs to its Residents.’The following piece has the same content, but I have added a few updates on it. I think this is a timely article because of the current precarious situation in the so-called Souther Nations Nationalities and People’s Region( SNNPN) and Awassa. 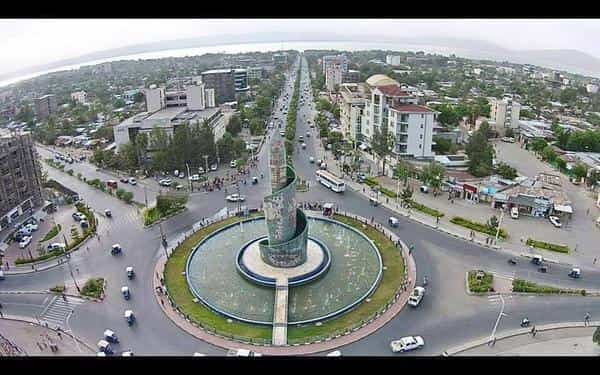 Unbeknown to the residents in Awassa, the city has been very quiet for the last few weeks. The Fiche Chambalala holiday ended peacefully, and those who used to distribute the peace of the city whenever they pleased haven’t been making any noise lately.

People are giving various opinions to the current peaceful atmosphere in the city. Some are saying the federal government has promised the extremists to create their own kelil. Others are claiming the government has warned the leaders of the notorious Ejjeetto to stop agitating the unemployed youth to distribute the peace of the city.

The Sidama extremists, in the mean time, have been very busy. They have been printing thousands of flags for their new Sidama Kelil that will be created in July 18, 2019. They are also claiming they have drafted a Sidama Kelil constitution, and they will introduce it when they unilaterally declare their own Kelil in July. Residents in Awassa are very edgy and eagerly awaiting the upcoming drama to unfold. The extremists are bragging everyday that they will declare their Kelil even at the cost of sacrificing half of the people of Sidama! They will do anything to get more money from the federal government as long as it gets into their pockets.

Whatever happens next, the federal government must not compromise the city of Awassa to appease a few corrupt extremists.Like other cities in Ethiopia, Awassa has been a living hell for its multiethnic residents. The federal government has all the reasons to make Awassa a federal city. Removing the city from the jaws ethnic entrepreneurs and making it a city for all Ethiopians is the only way to create peace and stability in the city.

Ones dubbed as a ‘small Ethiopia’ and a favorite destination of everyone, Awassa has been under siege by Sidama extremists since prime minister Abiye Ahmed came to power one year ago. In a city where ninety-eight percent of residents are non-Sidamas, a few Sidama extremists have been running the city like a private corporation. They have been allowed to create a system similar to the defunct apartheid rule in South Africa. The system they have established helps and benefits a single ethnic group excluding other groups in the city.

Almost all key government positions are held by ethnic Sidamas. Merit system doesn’t work in the city. Ethnicity is the only requirement for employment and advancement. People who don’t possess a third-grade education and with forged diplomas have been brought from a place called Benesa and given a free pass to corrupt the bureaucracy. The first thing a new recruit learns is how to ask a bribe. One only needs to visit various government institutions in the city to see incompetent and illiterate individuals struggling to read and write simple sentences related to their jobs. Many educated residents left the city in frustration; and those who chose to remain lost any hope of living. It is also common to see, in every corner of the city, helpless youths chewing khat from daw to dusk.

Education institutions are overrun by those who have nothing to show except forged degrees and diplomas. I wonder how many illiterate instructors have infested our learning institutions. We will find out their numbers when the government starts cracking down on them. But, I can assure that here in Awassa there are many quacks roaming in different campuses where they shouldn’t belong in the first place.

Corruption is rampant in Awassa. Non-Sidamas get nothing done for them without paying bribes to ethnic lords who occupy all key positions in the city. The Sidama ethnic entrepreneurs have two sources of incomes: regular government salary and bribe. In addition to paying taxes, citizens must pay bribes to get things done.

The ethnic bosses have no shame asking for money the very people they harass regularly. Due to the recent unrest and slowdowns in economic activities, bribe monies are not coming easy. To tackle the problem, ethnic lords have concocted a new trick to get bribes: to visit businessmen of the city at their work and ask them to pay them ‘little money for gas’ and get anything they want.

A few days ago a trusted source with the knowledge of the issue told me that the Sidama politicians paid ten thousand birr to each Oromo delegate who attended the Fiche Chambalala holiday. Apparently, the Sidama ethnic entrepreneurs believe that by bribing the Oromo delegates, they would secure their own Kelil. No wonder the Sidama Zone had finished its budget in the first seven months of the new year!

Awassa residents are being victimized by incompetent judges and law enforcement officers. I have seen people who have committed murders released from prison after serving only six months, while those who are in jail for petty theft locked up for years. Last month, a man fired eight bullets at people indiscriminately, and today he is a free man walking on the streets as if he had done nothing. He paid a bribe to get released, and he is free to do whatever he wants. The police force of the city, which is entirely made up of the Sidama ethnic group is the primary reason for the suffering of Awassa residents at the hands of ethnic lords.

The gun-wielding incompetent and poorly trained police force harass and displace city residents with impunity. Its members accept bribes and collaborate with a terrorist group which calls itself Ejjeetto.

True change in Awassa starts when the current police force is completely disbanded, and a new force comprised of the residents of the city is established. People are expecting a multi-ethnic and competent police force which doesn’t serve the interest of a few ethnic lords in the city.

In addition to ensuring the safety of the citizens in the city and emancipating them from ethnic entrepreneurs, the federal government has other important reasons to make Awassa a federal city.

The government has made large investments in Awassa with a view of creating employment opportunities and alleviating the people of the country from poverty. One of the largest industrial parks in Africa has been built in Awassa. When fully operational, the park will employ sixty thousand people and expected to generate one billion dollars a year in exports. Since coming to power, Prime Minister Abiye has brought to the park foreign leaders and dignitaries for official visits, signaling the importance of the city and its industrial park to the nation.

The express highway which will connect Addis Ababa to Awassa is another significant investment the government has made in Awassa. When the work is completed, it will take less than three hours to travel between the two cities. The road will help the industrial park ease its supply chain process, increasing its competitiveness in the world markets.

The federal government has also spent an enormous amount of money building an international airport in Awassa. When fully operational, it will directly connect big cities like Washington DC to Awassa. The airport will play an important role in bringing tourists to our county, which will help ease the need for foreign currency.

Awassa is big, beautiful and multiethnic city endowed with convenient weather. Its role in helping ease the over-population of Addis Ababa must be taken into consideration when making it a federal city. Addis Ababa is the seat to the federal government, African Union, embassies, and different international organizations. It can’t handle all the activities that are taking place all year long. The government can make Awassa a seat of the Ethiopian parliament.

Like the United States and other developed countries, Ethiopia also needs multiple business cities to help the country achieve its developmental objectives. Who doesn’t want to have cities like Washington, Chicago, Los Angeles, and New York in his country? Therefore, the government has the duty to make Awassa, not only a place for all Ethiopians but also citizens of the world.

Awassa was founded in the early 1950s by different ethnic groups in the country. It was only after the TPLF had invaded the country and introduced ethnic politics that some ethnic lords showed up and started telling us the city is theirs. Many are wondering why they didn’t raise the same claim before. Instead of living in peace with their fellow human beings who have contributed to the creation and development of Awassa, ethnic entrepreneurs spread hate and fear among the city’s residents. They want to own things that they haven’t worked for.

By looking at the names of places in Awassa, one can easily find out who the original settlers of the city. Names like Pizza, Harrer Sefer, Wokuro Sefer, Philadelphia Sefer, Gabriel Sefer, and others are sufficient proofs that who was behind the creation and development of Awassa. It is only after the arbitrarily imposed ethnic federalism that Sidama extremists started to replace the original names with their new versions including the name of the city.

At the moment people in Awassa are living in constant fear, unsure of what the future holds for them. They all think that something has to happen soon to change the current gloomy atmosphere riding over the city. Everybody is tired of ethnic entrepreneurs, who have besieged the city. Business activities have cooled down affecting everyone. Children are afraid of going to school.

The hesitation of the federal government to undertake decisive action has left the city population baffled and costing its residents. Many business activities in the city have cooled down significantly.

The prime minster has to stop giving sermons and act decisively on the issue of Awassa. It should also be underlined that the Hadiya, Wolita, Gurage, Kefecho, and Kembata zones have an equal stake when it comes to Awassa.

As I write this piece, the zones are organizing a protest to demand Awassa be a federal city, where people of fifty-six ethnic groups played a major part in its development. Anything short of making Awassa a federal city is sending the entire country into the dark ages. All Ethiopians have an equal stake in Awassa and it MUST be made a federal city without further delay.