To support Amhara victims of ethnic cleansing is not a separate goal from supporting a united Ethiopia in which every person from either a specific ethnic heritage or of mixed descent is treated with respect.

There is no disputing that: 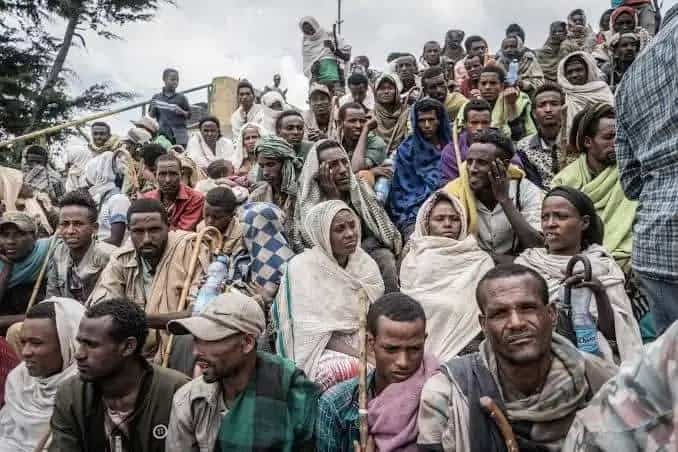 No one with a brain or a conscience would have accepted the absurd and downright grotesque argument, “We can’t talk about Jews getting beat up and mass-murdered! This undermines German unity!”

There were plenty of those in 1930s Germany and even in the U.S. and elsewhere who tried to deny or downplay what was happening to the Jews. You can even go read Deborah Lipstadt’s Beyond Belief on how the American press handled it. Spoiler alert: They handled it badly; and the story does not end well.

And guess how the American news media looked after failing to do their job? Guess how others looked who tried to downplay it? Guess what the legacy is now for those who turned away a ship of Jewish refugees during the war?

Want to be in that club?

To those who would say, You just spent the better part of a year helping to debunk #TigrayGenocide—you don’t think Amhara Genocide could be inflated or exaggerated?

No, I don’t. Because we marked horrific incidents of ethnic cleansing going back to at least the summer of 2020, and there is a pile of disturbing evidence that suggests the horrors were going on even prior. There is a huge difference between the cynical, shameless campaign of phony “Tigray Genocide” that began with a hashtag on November 4, 2020, and a sickening roll call of massacres of Amhara that are still undisputed in their basic facts and which go back well before that.

To use the disingenuous argument that identifying victims of Amhara is “reducing them to their ethnicity” makes as much sense as trying to object when it’s pointed out, hey, someone’s murdering scores of Rohingya. Yes, they’re Burmese, but they all also happen to be Rohingya.

You can debate complicity. You can argue negligence on the part of certain authorities—we can talk about those issues in separate conversations. You can even make a case that certain Twitter accounts are camouflage for TPLF trolls.

But Amhara people keep. Getting. Massacred.

And as I asked once online, forget the legal definition according to the UN—which has let Ethiopia down in countless ways since this conflict began—how many massacres do you need before we agree it’s a genocide?

Not the legal term, not how journalists define it, how you and I and any ordinary, reasonable person with a conscience would define it.

Don’t like the word “genocide?” You want to debate and quibble over its use and claim it’s some kind of exaggeration or sends the wrong message?

Okay, let’s take it out of the equation. How about this: Let’s see this hashtag gain some popularity, and the message behind it is simple.

If you’ve got a problem with the basic tolerance of these words, with its essence… if you want to put up obstacles against it, then I put it to you that you have another agenda.

No more lies. No more minimizing the obvious. No more misdirection. This is where the struggle has to go. Ethiopians can decide for themselves who is guilty and how to hold the guilty accountable, but for now, right now, let’s get the facts out over the extent of the ethnic cleansing and do our best through the exposure to make it stop.

When you try to minimize Amhara suffering and loss, you’re pulling the equivalent nonsense of saying to a BLM activist, “Oh, all lives matter!” Yes, they do, but not the point.

To recognize it does not imply a political position past “Amhara are being targeted and massacred.”

To recognize Amhara Genocide does not imply you support outside intervention or Western media narratives exploiting the situation, or any other rubbish.

It just means you recognize “Amhara are being targeted and massacred.” And you want it to stop. Period.

It’s that simple. Forget labels, forget implications from labels, lose all the bullshit. Recognize the problem.

This is where the struggle must go now. And the victims need our help. Speak up for them.