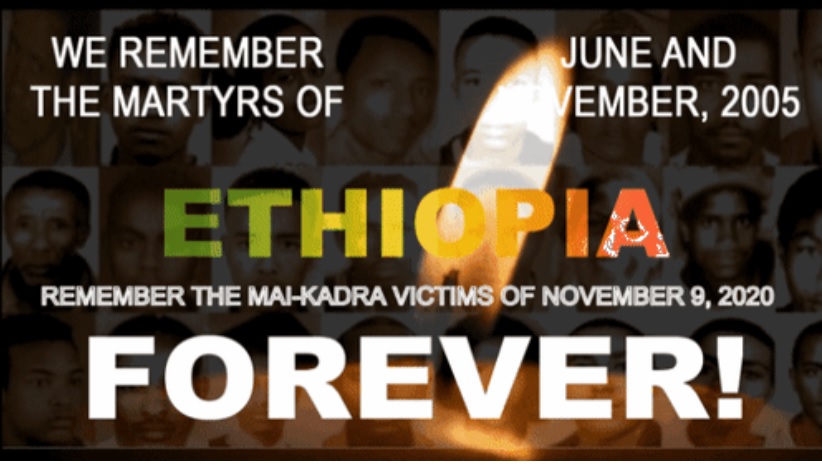 Since 2007, I have written anniversary memorial messages in remembrance and in honor of victims of TPLF massacres and wanton violence in Ethiopia.

In my first memorial tribute, “Remember, the Ethiopian Martyrs of June and November, 2005 Forever!”, I reminded my readers that it our moral duty “to bear witness for the dead and the living” as Elie Weisel, the Holocaust survivor and Nobel laureate, so nobly put it.

I urged, “We must remember because we have ‘no right to deprive future generations of a past that belongs to our collective memory. To forget would be not only dangerous but offensive; to forget the dead would be akin to killing them a second time.’”

Fifteen years later, I still urge all Ethiopians to remember in November the countless victims of TPLF terror and violence in Ethiopia.

Since 1991 when the TPLF seized power, millions of Ethiopians have been displaced, tortured, exiled, dispossessed, arbitrarily imprisoned and treated as third-class citizens. Tens of thousands have been massacred in TPLF-sponsored terrorism.

No one has a list of TPLF crime victims. But each one of them is known unto God. We must remember them all.

I REMEMBER THE VICTIMS OF THE MAI-KADRA MASSACRES OF NOVEMBER 9, 2020 AND ALL OTHER VICTIMS OF TPLF TERRORIST WAR IN ETHIOPIA SINCE NOVEMBER 4, 2022

We must remember the victims of the Mai-Kadra Massacres of November 9, 2020 and all other victims of TPLF terrorist war in Ethiopia.

On November 12, 2020, Amnesty International released a report “confirming that scores, and likely hundreds, of people were stabbed or hacked to death in Mai-Kadra (May Cadera) town in the South West Zone of Ethiopia’s Tigray Region on the night of 9 November.”

Amnesty International based its report on the testimonies of eyewitnesses “who said forces loyal to the Tigray People’s Liberation Front (TPLF) were responsible for the mass killings, apparently after they suffered defeat from the federal EDF [Ethiopia Defense Forces].”

The massacres were conducted in a manner reminiscent of the Rwanda Genocide in 1994.

According to Amnesty International:

People who saw the dead bodies told Amnesty International that they had gaping wounds that appear to have been inflicted by sharp weapons such as knives and machetes, reports which have been confirmed by an independent pathologist commissioned by Amnesty International. Witnesses said there were no signs of gunshot wounds.

We have confirmed the massacre of a very large number of civilians, who appear to have been day labourers in no way involved in the ongoing military offensive. This is a horrific tragedy whose true extent only time will tell as communication in Tigray remains shut down.

The Mai-Kadra Massacre is only the tip of the iceberg of TPLF’s crimes against humanity and war crimes.

Eyewitness testimony of the TPLF massacres in Mai Karda by ESAT (Ethiopian Satellite Independent Television Service (with author’s English translation transcript below in order of appearance in the video) shocks the conscience.

This is simple genocide. It is ethnic-based attack. Indeed, they separated the Amharas and kill them. When they asked you and you do not speak in Tigryina language, that means you are already an Amhara and and killed.

Oromos and Amharas have been killed. They started with Amharas, not Oromos. Anyone who spoke Amharic language, they crushed them. With machetes. How can you chop up a human being with a machete? If you are Tigrean, you are safe. You are saved. If you are an Amharic speaker, you are killed. That is your death. You are finished.

It is ethnic-based. Especially Oromos and Welaytas have been massacred because they said they were together with Amharas. It was a massacre. If you see the identification card of the people standing here, you will see they committed ethnic-based genocide and fled.

These are our people they killed. They close the doors and attack them in their homes and burn their dead bodies. This was something that was not done even during the time of Hitler. It is incomprehensible. How can you do such a horrible thing? This is total savagery. I never thought I would see something like this in my life. I do not believe I would see something like this in the future. To see this in my young age has totally shocked me.

They were checking how close the Ethiopian Defense Forces were. They were asking how many kilometers away are they. Hurry up. They’re getting close. After that, they started loading up I’m out of household goods and cell phones. After they killed and chopped up the dead bodies.

You saw them coming running. At the time you were committing these acts, we were at home. There was a house fire and we were trying to put it out. We could not find anyone to help us put out the fire. We dropped our cell phones and ran and got away.

They selected only Amharas by checking their identification cards. After they rob them of their properties and cell phones, they killed him. Luckily, Ethiopian Defense Forces arrived just in time to prevent a larger massacre. They arrived with Amhara special forces. The entire people came out. That is how the Ethiopian Defense Forces prevent more people from being killed.

The TPLF forces not committed massacres cannot be called “Tigrean Special Forces”. They are terrorists. They do not represent the people of  Tigray. It is very sad. Many of The Killers have escaped. That are also many who have been captured. Some tried to throw off their uniforms and join up with the local civilians. Some of the terrorists were also killed.

When the TPLF massacred hundreds at the Irrecha festival in 2016, we did nothing!

When the TPLF massacred hundreds of students at Ambo and other universities in 2014 we did nothing!

When the TPLF massacred hundreds using their lackeys and paid killers and jailed thousands of innocent citizens in Oromia region and displaced millions more, we did nothing!

When the TPLF massacred hundreds using their lackeys and paid killers and jailed thousands of innocent citizens in Amhara region, we did nothing!

When the TPLF massacred hundreds and jailed thousands of innocent citizens in Tigray region, we did nothing!

When the TPLF massacred hundreds and jailed thousands of innocent citizens in Sidama region, we did nothing!

When the TPLF massacred hundreds and jailed thousands of innocent citizens in Afar  region, we did nothing!

When the TPLF massacred hundreds and jailed thousands of innocent citizens in Tigray region, we did nothing!

When the TPLF massacred hundreds of innocent civilians in Somali region of Ethiopia, we did nothing!

When the TPLF using their lackeys and paid killers massacred hundreds of people in Benishangul and Wellega, we did nothing!

When the TPLF massacred hundreds of Ethiopians in Gambella, we did nothing!

When the TPLF massacred hundreds of Ethiopians following the 2005 elections, we did nothing!

When the TPLF massacred and ethnic cleansed Gura Ferda in 2012 and in 2020, we did nothing!

On November 2, 2022, the TPLF signed a Permanent Cessation of Hostilities Agreement which will result in the disarming, demobilization and demilitarization of the TPLF.

On November 9, 2022, the third anniversary of the Mai Karda massacres, TPLF leaders are working with Ethiopian officials in implementing the Agreement in Nairobi, Kenya.

I believe that what self-centered men have torn down men other-centered can build up. I still believe that one day mankind will bow before the altars of God and be crowned triumphant over war and bloodshed, and nonviolent redemptive good will proclaim the rule of the land.

I believe Ethiopia today stands triumphant over war and bloodshed, and nonviolent redemptive good will proclaim the rule of the land.

I REMEMBER THE TPLF MASSACRE VICTIMS OF NOVEMBER 2005

For nearly a decade and half, I have memorialized the month of November by remembering the hundreds of innocent Ethiopians who were massacred, maimed and disfigured by the Tigrean People’s Liberation Front (TPLF) in the Meles Massacres of 2005.

As I have said so many times, I joined the Ethiopian human rights movement in 2005 and has remained fully engaged in the struggle ONLY because of the Meles Massacres.

Following the parliamentary elections in May 2005, security and police forces under the direct command and control of Meles Zenawi, the late leader of the TPLF, massacred and seriously injured hundreds of unarmed protesters in the streets and scores of defenseless inmates at Akaki prison.

An official Inquiry Commission established by Meles Zenawi himself documented 193 unarmed men, women and children demonstrating in the streets and scores of other detainees held in a high security prison were intentionally and deliberately shot and killed by police and security officials. An additional 763 suffered life-threatening gunshot injuries.

The graphic and shocking photographic evidence of the TPLF massacres have been preserved in the Testimony of Yared Hailemariam before the Extraordinary Joint Committee of the European Parliament on Foreign Affairs and Human Rights on May 15, 2006.

I remember the hundreds of thousands of TPLF maimed, injured, battered and mutilated victims of TPLF violence whose names are only known to God.

I REMEMBER THE PRISONERS MASSACRED WHILE TRAPPED IN THEIR CELLS IN KALITI PRISON ON NOVEMBER 2, 2005:

On 11/11/11, Yenesew Gebre, a 29 year-old Ethiopian school teacher and human rights activist set himself ablaze outside a public meeting hall in the town of Tarcha located in Dawro Zone in Southern Ethiopia.

Before torching himself, Yenesew  told a gathered crowd outside a meeting hall:

“In a country where there is no justice and no fair administration, where human rights are not respected, I will sacrifice myself so that these young people will be set free.”

Remember, remember Ethiopia in November
The TPLF massacres, plunder and murder
In November, the TPLF tried to tear us asunder.

I respectfully ask all Ethiopians to observe a private moment of silence on November 9, 2022 in remembrance and honor all victims of TPLF massacres and terror.

2 thoughts on “I ALWAYS REMEMBER ETHIOPIA IN NOVEMBER!”