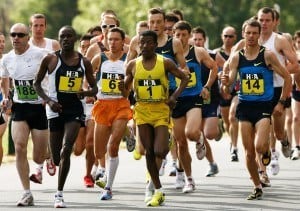 Marathon world record holder Haile Gebrselassie confirmed on Monday he had changed his mind over retirement.

A week after tearfully announcing he was hanging up his spikes, the 37-year-old Ethiopian distance runner posted a message on his Twitter account on Monday to announce a U-turn.

“First I want to thank you for all your support and great responses,” he wrote.

“After a few days in the countryside I could take some decisions. Running is in my blood and I decided to continue competing. My announcement in New York was my first reaction after a disappointing race.”

Gebrselassie said he would start focusing on his next race once he had recovered from a knee injury.

Sings that Gebrselassie might change his mind emerged last week.

His manager, Jos Hermans, was quoted in the Dutch newspaper De Telegraaf on Wednesday as saying that he would be flying to Ethiopia to meet the runner, who had announced the previous Sunday he was quitting after pulling out during the New York marathon with the knee injury.

“If he spends some time with his family, I am sure that Haile will say that he really wants to run. He must first come to rest. He was very emotional Sunday,” Hermans said.

Gebrselassie won four straight 10 000m world titles 1993 in Stuttgart and won Olympic gold over the distance 1996 in Atlanta and 2000 in Sydney.

The diminutive runner was a world record holder over 5 000m and 10 000m and officially ended his track career with a 10 000m bronze at the 2003 worlds. However, he returned to come sixth at the 2008 Olympics after not running the marathon due to pollution concerns.

Moving on full-time to the classic 42.195km marathon he first contested in 2002, Gebrselassie claimed the world record 2007 in Berlin and bettered it there the following year to two hours three minutes 59