Most political and economic discussion on Ethiopia considers performance improvement, rate of implementation and governance as the most important factors affecting change. My view is that rapid population growth and its economic consequences are the most serious problems faced by the Ethiopian people. The focus on power struggle and market conditions could have been more important if death and fertility are equal, or nullify each other as in the cases of developed countries. But Ethiopia is now at historical stage of demographic transition and in economic planning number, size and speed matter above all else. In this summary essay I will explain the features of the exponential growth, estimate the carrying capacity of the economy, discuss current approaches to development reforms and make suggestions to avert the danger of “major proportion” collapse. The diagnosis of the problem and policy recommendations builds on earlier discussions (see reference).

The nature of the exponential growth of the Ethiopia population can be explained in different ways: i) by a curve defined by an exponential equation (see figure 1), ii) by the rate of the population growth (see figure 2), and iii) through population doubling (see figure 2). Figure 1
is an exponential curve developed using the formula (N = Noert) for the period 1905-2013. The graph shows that the population started to grow slow in the first quarter of the 20th century and grew faster and faster all the time since 1940s. It had grown more than five times since 1900 and three times since 1955. The growth shoot up and became explosive particularly few years after the nationalization and distribution of rural lands. The curve shows that the population growth is bigger and faster. The larger the quantity gets, the faster it grew, and the rate of growth peaked at an average of 2.92% per annum during 1980-2000. 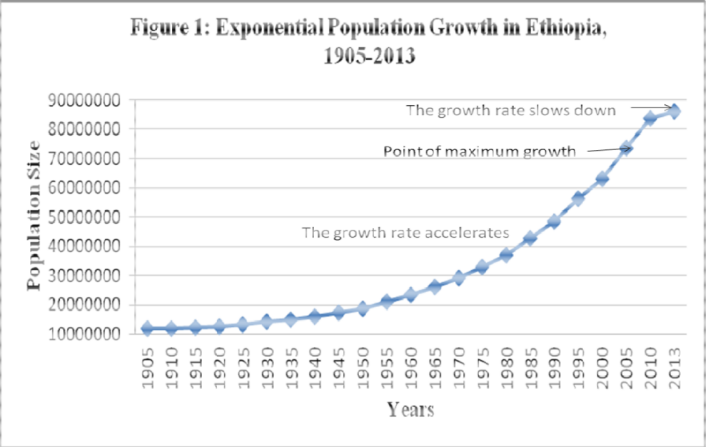 Even if the percentage rate of growth has been changing between 2 and 3 over the past five decades (see figure 2), growth was proportional for each successive period, i.e., the amount of the increase was proportional to the size of the population per time period. Sustained positive variable and constant rates of growth caused an exponential growth through population doubling. The Ethiopian population had doubled since the early 1970s and as figure 2 shows, the absolute increase constantly doubles.

Ethiopian population has now topped 86 million, the second largest population in Africa. According to the projection made by Central Statistic Authority (CSA), the population will increase at a rate reaching a minimum of 2,3% during the 2015-2020 period (World growth rate at 2012 is 1.14%), adding some two million people every year. By 2050 Ethiopia’s population is projected to reach 174 million to become the 9th largest country in the world (UNFPA, 2011). 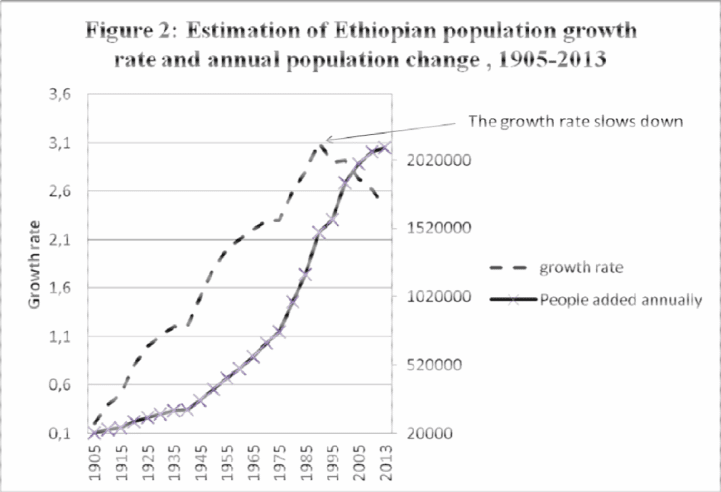 What is the maximum sustainable population for the Ethiopian economy? An exponential growth model assumes that there is a finite amount of resources from which to draw. This is obvious particularly for a country where the majority of the population relies on subsistence and informal economy for employment, income generation and production of goods. Population does not continue to grow in a land-based subsistence and informal economy characterized by low labor productivity. There is a resource scarcity and productivity limit beyond which population growth entails a crash. What is the level of supply with respect to the growing needs of the population?

I used a multidimensional composite indicators to measure and assess the sufficiency of supply for a growing population. The indicators are selected based on the identification of the objectives, needs and capacity of the sector of a population that is increasing. I used three multidimensional categories of supply-need indicators (food security, employment rate and infrastructure coverage) to establish the maximum number of population for the economy.

To calculate the magnitude of the category indicators on food security and employment I had to disaggregate the CSA data at the household level to estimate consumption requirements, resource needs and supply. Gap is calculated as total needs minus resource availability. All three index components are expressed in percentages and weighted equally. Since the indicators use different scale units, I reduced effects to a single unit called overpopulation for the purpose of aggregation. Threshold is identified by calculating the number of people which can be considered as overpopulation.

Figure 3 shows the overall supply-need index calculated on the basis of the 2007 census data. According to the result the Ethiopian population overshoots the country’s economic carrying capacity by 25 million people. That means 25 million people were economically dragging the other 48 millions. The resource quantity and productivity level of the economy supported only 65% of the population.

Even for a layman a growth rate factor shows how great a burden would be imposed on a country by the changing needs of its people for infrastructure (e.g., schools, hospitals, housing, roads), resources (e.g., food, water, electricity), and jobs. What is particular about an exponential growth model is its assumption that there is a finite amount of resources from which to draw. Economic output expansion stops if population continues to grow under conditions of resource scarcity and low productivity. What happens to the people if and when economic expansion stops? What happens in the long run if there is a persistent food deficiency and structured unemployment under constant rate of population growth?

The carrying capacity of the economy is measured not only through mismatch between current available resources and desired needs. Another index which shows the carrying capacity of the economy is the population losses and economic crash caused by the exponential growth. What has happened to the overpopulation? Discussion on population and economic crash is not related to a matter of liking or disliking a government. Those familiar with the mathematics knew that a continuation of trends in exponential growth would bring famine, disease, poverty and conflict told by population growth experts. Crash alarms are important to review policies and undertake concerted efforts to improve performance. If so, what are the indicators and data sources for measuring population loses and economic crash?

Since there are national and international studies on the country’s demography, level and intensity of poverty, I did not need to develop data model to calculate the second index. Indicators can be drawn from a variety of national and international sources, including: CSA, Federal Ministries, Ethiopia Demographic and Health Survey, the Multidimensional Poverty Index (MPI) introduced by the Human Development Report, Legatum Prosperity Index (LPI), World Bank and others.

Population losses can be measured through two demographic indicators: average life expectancy and outmigration rate. The 2012 average life expectancy for Ethiopia was 56 years and the gap with more developed countries can be as high as twenty years. The life expectancy of the country shows the socioeconomic status and conditions of the population. International migration flows out of Ethiopia is becoming high amounting to a stock of half million population in a year. Government reports and World Bank studies show that this rate has been observed since 2005. According to my calculation, the international migration flow

is equal to the size of the annual labor force growth in rural areas of the country. This means that the country is losing the “demographic dividend”, the conditions that create opportunities for development. Already migration of Ethiopians to the Middle East and Arab countries has caused shortage of trained manpower and starved the flower, health and education sectors of the country, according to recent reports.

deprivation. Economic crash can be caused by political factors and macro-economic policies and in such cases the crash can be measured and explained mainly by a single phenomenon. But if all indicators of the crash happen together or overlaps in time and space as all of them do now in

Ethiopia, it is related to the start of the doubling time of the population and the latest doubling time in Ethiopia was twenty years ago. There are abundant studies on the various subgroup indicators of the economic crash and readers can consult online scientific electronic libraries. Figure 4 is an extraction from the Multidimensional Poverty Index (MPI) report of 2010, showing the level of deprivation in Ethiopia.

Even if my calculation model of Population Need-Resource Availability Index is not precise, the objectivity and reliability of my estimation on carrying capacity of the economy can be seen from what has happened to the overpopulation. Under normal circumstance, establishing the assessment criteria and determining carrying capacity threshold requires team work and research funds. The methodologies for assessing the carrying capacity should be a result of a well financed project involving expert groups drawn from economics and demography. In the absence of teamwork and financial opportunity, I have to rely on the estimation skills of my model, which I think has served the intended purpose.

“Economic collapse often has the character of a cumulative process. Let it go beyond a certain point, and it will tend for a time to gain strength from its own development as its effects spread and return to intensify the process of collapse. Because no great strength would be required to hold back the rock that starts a landslide, it does not follow that the landslide will not be of major proportions.” Milton Friedman and Anna Schwartz, A Monetary History of the United States, 1867-1960.

I defined carrying capacity of the Ethiopia economy by reference to its ability to absorb the demands/needs of rapid population growth (to provide food security, productive employment and services for a growing population) without causing significant crash (outmigration, deprivation, etc.). I used two indexes (indices) to measure the carrying capacity of the country’s economy: Population Need-Resource Availability Index and Population-Economic Crash Index.

My analysis based on the first index shows that population growth in Ethiopia has exceeded the carrying capacity of the economy. Based on the calculation of the 2007 census data, 25 million people can be considered as overpopulation. My observation is that population growth has far surpassed any other kind of growth including the modern economic growth (i.e., registered, regulated and organized manufacturing and non-manufacturing enterprises).

Surprisingly there is no estimation on the mismatch between the material needs of a growing population and the ability to satisfy those needs through technological development. Most discussion focus on governance issues, performance improvements, market conditions and ethnicity. There is a glaring lack of discussion on the availability and acquiring of economic resources to meet essential welfare packages. According to my view consequences of rapid population growth cannot be captured arbitrarily and separately. In the country’s economic development plan number, size and speed matters above all else. Rapid population growth consequences, economic performance and governance issues should be modeled as complete and closed.

Based on this perspective, in previous postings I advocated for green revolution and industrial decentralization. I outlined the mechanisms and listed solutions in the order of their sequence and priority as follows:

i)industrialization of small and medium towns for the creation of productive employment,

ii)state-led green revolution for the purpose of food security,

iii)rural land reform and consolidation for the purpose of internal migration and resource reallocation,

iv)green revolution by smallholder farmers for the purpose of capital accumulation and creation of production and consumption linkages,

v)program of family planning (method to plan rather than prevent children) for the purpose of increasing household savings.

potential is very large relative to the size of the economy. As of 2006, the gap between available and needed funds was $3.5 billion per year….Addressing Ethiopia’s infrastructure

deficit will require a sustained annual expenditure of $5.1 billion over the next decade. The power sector alone requires $3.3 billion annually, with $1 billion needed to facilitate regional power trading. That level of spending represents 40 percent of the country’s GDP and a tripling of the $1.3 billion spent annually in the mid-2000s. …If Ethiopia were able to redress the various inefficiencies identified and preserve overall spending at current levels, the infrastructure development targets would take 30 years to reach. Without eliminating inefficiencies, meeting the targets would take significantly longer 40 years in all.”

For comments the author can be reached at [email protected]

References on alternative development strategy and evidence based policy discussions