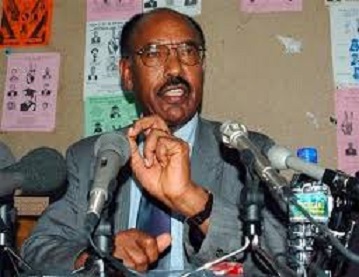 ADDIS ABABA (Reuters) – An Ethiopian court sentenced 35 opposition members to life in prison on Monday, rebuffing a prosecution request that they be executed for trying to overthrow the government, treason and inciting violence.

The remaining eight defendants, including four journalists, were ordered to serve terms of between 18 months and 18 years in a case rights groups and some donor governments criticized as an attempt to cripple the opposition after it made election gains.

“The accused have committed serious crimes, which caused the death of civilians and security forces and attempted to overthrow the government,” Judge Adil Ahmed told the court.

Many of the defendants, calling the case a politically motivated charade, had refused to present a defense despite court orders to do so.

Thirty-eight defendants were in court, while the rest were tried in absentia. Relatives and defendants wept, while others held their head in their hands in apparent shock.

The defendants, among them leaders of the opposition Coalition for Unity and Democracy (CUD), were convicted last month on charges relating to violent protests over 2005 polls the opposition says were rigged.

Adil said they had the right to appeal, but it was not immediately clear whether they would.

Ethiopian state television said the CUD defendants who were sentenced to death had appealed for mercy in a letter to Prime Minister Meles Zenawi. It said the letter was received three weeks ago by Meles’ office, which decided not to reveal the contents until a final court decision.

“What we have done was wrong and we ask the government and people of Ethiopia for mercy,” state television quoted the letter as reading.

After prosecutors demanded the death penalty last week, the United States, a major ally, expressed surprise and urged the Ethiopian government and high court to take action “consistent with the greater objectives of bolstering the rule of law”.

Chief Prosecutor Shimeles Kemal used some of that language after Monday’s ruling saying he was satisfied with it.

“It’s a victory not only for the rule of law, but for all those people who have sustained damage as a result of the criminal acts perpetrated by offenders,” he told Reuters.

“It is also a victory to our fledgling democracy.”

“UEDF has always said the CUD case is not a court case. It is a political case. We have been demanding that the government should find a political solution to the CUD issue,” Merara said.

Amnesty International said it was dismayed by the ruling, adding most of those sentenced were prisoners of conscience and called for their immediate, unconditional release.

A parliament-commissioned inquiry found 199 civilians and police officers were killed in clashes over the vote, which was billed as the freest ever in the relatively young democracy.

The outcome, which gave Meles’ ruling coalition victory, sparked two rounds of violence. The parliamentary inquiry found that more than 800 people were injured and 30,000 suspected opposition members were arrested.

The 2005 results gave the opposition its largest showing in parliament. But European Union observers listed a catalogue of irregularities including the intimidation of opponents.

Meles has said he regretted the post-election violence, but blamed it on an opposition conspiracy to topple him by force.

Last month, he condemned calls by Western diplomats for the 38 in custody to be released. The remaining defendants are in exile, and face arrest should they return to Ethiopia.