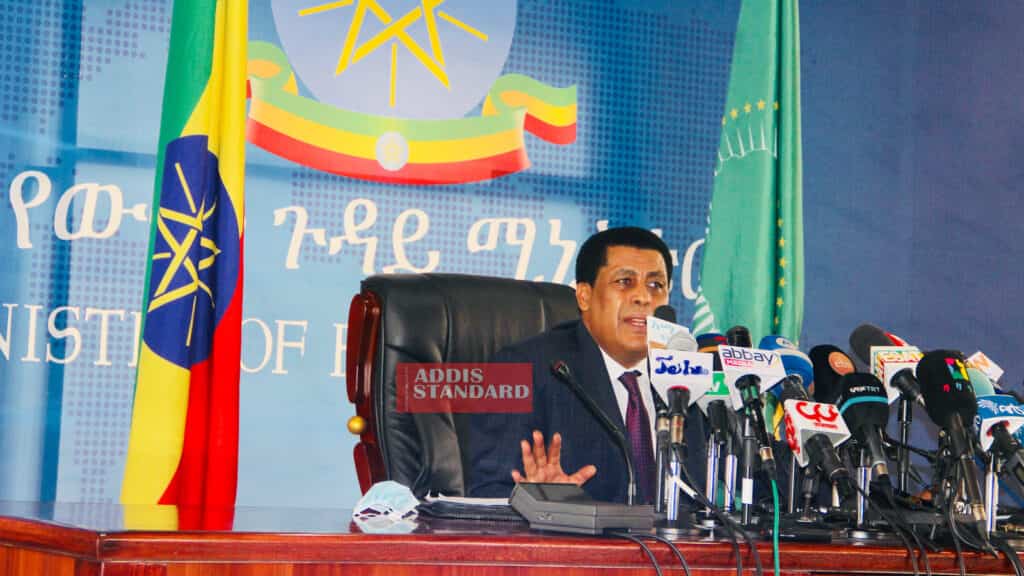 Addis Abeba –  “The Ethiopian government will cautiously examine the case of Eritrean passport holders with foreign visas, who complained of being barred from leaving Ethiopia, the Spokesperson of the Ethiopian Ministry of Foreign Affairs (MoFA) ambassador Dina Mufti said at today’s MoFA’s biweekly press release.

In the presser, the spokesperson stated his awareness that Eritreans who are residing in Ethiopia and hold valid visas from various foreign countries have been complaining of being barred from leaving Ethiopia. “There are legal, documentation, immigration and to some extent security issues the Ethiopian government is examining,” adding,” there seem to be indications of urgency to leave Ethiopia against what the country’s law and processes allow. We’re not barring them but are implementing the law,” he said.

The media house asked ambassador Dina Mufti regarding WHO’s head, Doctor Tedros Adhanom, recent complaints regarding the shortage of aid delivery to Tigray. “Regardless of all the impediments, the Ethiopian government will continue its effort to implement an unhindered humanitarian truce in Tigray. Trucks loaded with aids have so far been sent and will continue to be delivered,” he stated.

The spokesperson also discussed the meeting of Deputy Prime Minister and Foreign Affairs Minister, Demeke Mekonnen, Bankole Adeoye, AU Commissioner for Political Affairs, Peace & Security (PAPS). According to ambassador Dina, the commissioner expressed his appreciation for the fact that the Ethiopian government was doing all its efforts to restore peace and security in the country. He also said Demeke Mekonnen, in his part,  pledged that the government of Ethiopia would do all possible means to maintain peace and address the humanitarian crisis in the country.

Ambassador Dina also briefed about the border conflict between Ethiopia and Sudan. “Ethiopia has always been interested in addressing the conflict in peace,” adding, “the Ethiopian government set up three committees previously that were actively working on the matter and we’re still interested in handling the border conflict with these committees and other peaceful means. We’ve always considered the Sudanese as our brothers and we don’t need any conflict,” he said.

The border conflict between Sudan and Ethiopia started several decades ago over the al-Fashqa border area, where the northwest of the Ethiopian Amhara region meets in the state of el-Gadarif in Sudan. Despite various efforts since Haile Selassie I, and almost no efforts during the Derg regime, the issue has not been resolved yet.

In his concluding remarks, the ambassador stated that the Ethiopian government has continuously been engaged in discussions with the U.S. government on various issues and said efforts will continue to have Ethiopia return to being a beneficiary of AGOA.