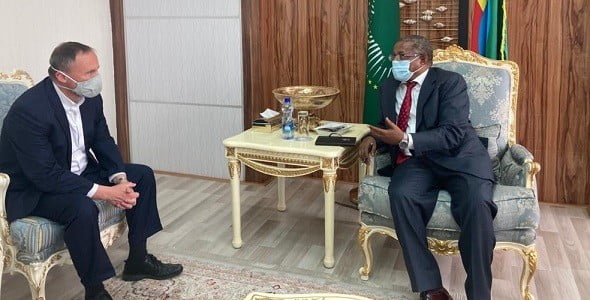 H.E. Gedu Andargachew, the Minister of Foreign Affairs of the Federal Democratic Republic of Ethiopia summoned today (October 24) the United States Ambassador H.E. Mike Raynor to seek clarifications on the remarks the US President made regarding the Grand Ethiopian Renaissance Dam (GERD) during his telephone conversation with the Prime Ministers of the Republic of the Sudan and the State of Israel.
Minister Gedu underscored the statement on the GERD and the negotiation process as misleading and wrong as the GERD doesn’t stop the flow of the Nile waters.
He said the incitement of war between Ethiopia and Egypt from a sitting US president neither reflects the longstanding partnership and strategic alliance between Ethiopia and the United States nor is acceptable in International Law governing interstate relations.
The Minister further informed the Ambassador that Ethiopia has never and will not in the future succumb to threats to its sovereignty and will be committed to continue the trilateral negotiations under the framework of the African Union.
361
SHARES
FacebookTwitter
Share this