By Mihret G.kristos and Assefa Mola 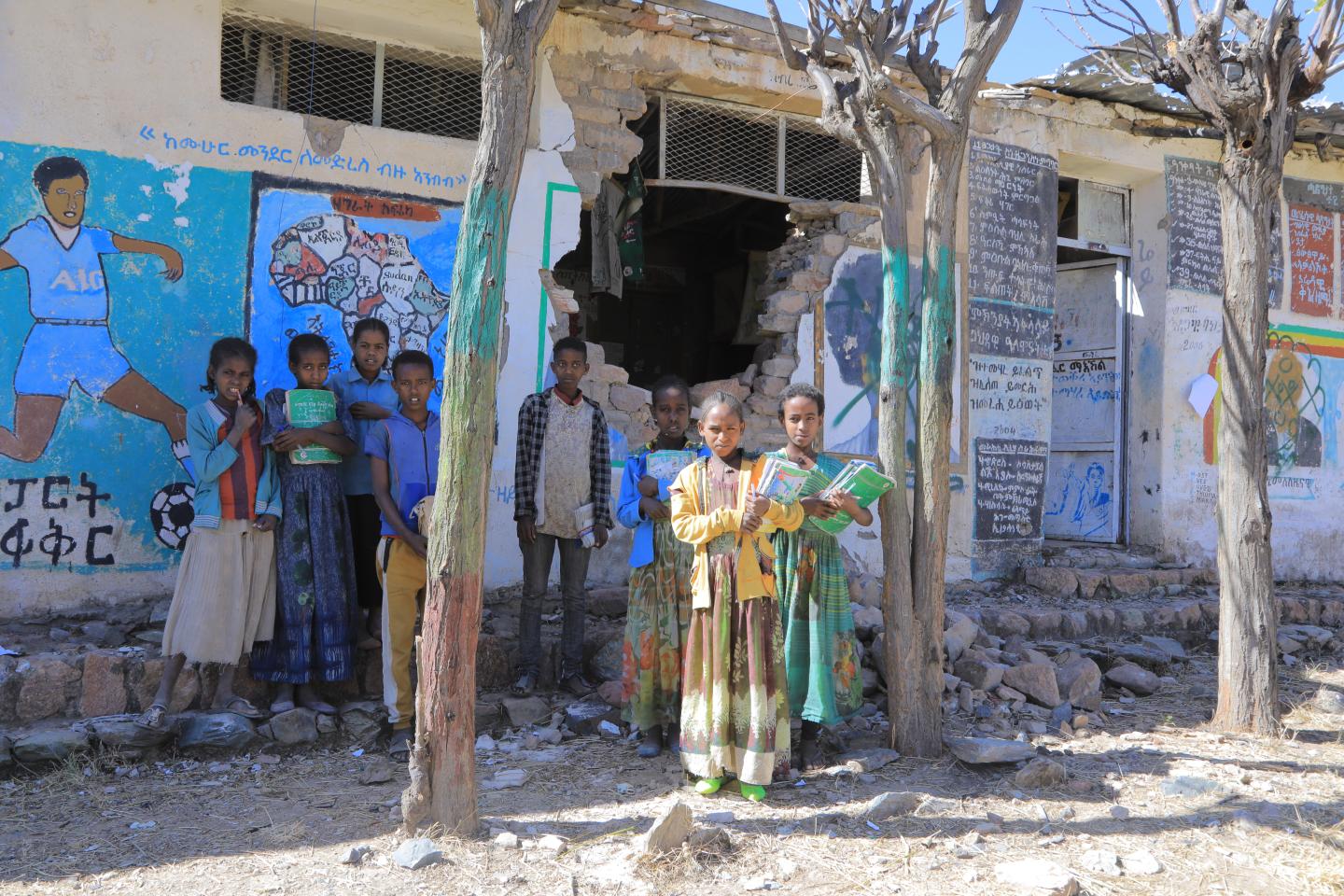 Addis Abeba – On 07 October, the United Nation’s Office for the Coordination of Humanitarian Affairs (UNOCHA) released a report revealing a staggering number of students missing out on schools across Ethiopia due largely to the effects of the ongoing wars, drought and flooding in different parts of Ethiopia.  At least 13 million students have not been enrolled into school for the 2022–2023 academic year which is a 45 percent decline in school enrollment from the previous year. For instance, 125 schools damaged by flood affecting 70,000 children in Gambela Region and more than 457 schools damaged by floods affecting nearly 200,000 children in Amhara Region,” the report said to

Out of the 13 million student, 401,000 students did not enroll to school due to drought, while 2.53 million children were kept out of school as a result of war. In addition 85% of schools in Tigray region and over 4000 schools in Amhara and Afar regions need chairs and blackboards, if they were to accommodate pupils.

This number is higher than another report by the UNESCO released in September. According to it, there were currently at least 10 million children in Ethiopia between the ages of 6 and 18 who are not enrolled to school. “This puts Ethiopia among the top five countries with the most children out of school,” the report said.

But neither the UNOCHA, nor the UNESCO report on such massive numbers of school kids missing out on their educations drew the attention it deserved; more so the fact that it came in the backdrop of rising costs of education in the country, which is testing the resolve of parents who are lucky enough to enroll their kids into school.

According to Ethiopia’s Ministry of Education the country aimed to enroll 29.3 million students for the 2022/2023 academic year but it was able to register only 16.3 million. Which means 45% of eligible students have not been enrolled.

In September UNESCO said makeshift schools must be set up in safe areas and teachers need materials to carry out lessons across war affected regions in northern Ethiopia. Adding that the teachers also need to be trained to help children cope with the stark realities of war.

The UN Security Council has passed a resolution on the preservation of education in war zones last year and it was heralded as a significant advancement
in the protection of the most defenseless kids caught up in armed conflicts around the world.

In Tigray Region where the effect of the war is severe, the regional Education Bureau recently assessed the damage inflicted on the education system in almost all schools in six zones of the region except for areas not under the control of the regional administration.

According to a report released by the bureau following the assessments, schools, education materials and essential equipment such as computers have been destroyed. Students who are able to go to school are learning in classrooms which were half-burnt and destroyed during the fighting.

In addition to the severe damage inflicted on schools and school infrastructures, the report also reveals that thousands of teachers and students have been killed since the conflict started.

Education experts say the impact of not sending children to school at their right age goes beyond families and have serious consequences on the country over a long period of time.

President of Unity University, in Addis Ababa Arega Yirdaw (PhD) told Addis Standard that any prolonged absence of students from school could result in loss of what they have learned and create a gap in their learning ability which can be a serious issue for a country.

He says If kids were unable to attend school at their right age, they rather become a burden to their families and their country than helping them as they should.

“I waited to buy uniforms for my children hoping that the price would come down, but to the contrary it has gone up”

Another education expert who asked to be anonymous says if students were to drop out of school for a longer period they may lack concentration and could easily forget things. Besides they might be exposed to stress and mental disorder. Students may have unhealthy interaction with family and community members they stay away from schools he added.

The expert claims that due to anger and frustration that may occur due to absence from schools, students in war affected areas may consider to join the war and fight. “I am worried and afraid if things are to continue like this, we may end up having ineffective and unproductive generation,” the expert says.

The two experts agree that conflicts in different areas of the country should be resolved quickly, drought affected areas should be rehabilitated for students to get back to school.

Apart from the impact of war, drought and flooding, inflation in prices of education materials posed a serious challenge to the education system in the country as parents struggle to send their kids to school including in the capital Addis Abeba.

Addis Standard met with Jemal Mehedi, a father of three, around Piassa in Addis Abeba, while we was buying school materials for his kids. He says two of his kids go to elementary school while the other is in a kindergarten. Jemal is among low-income earning part of the society.

“This year exercise book is worth a gold price, but still I am purchasing school materials for my kids not because I have enough money but because it is my duty. The money I just spent for school materials could have covered household expense,” he says. He complains about the government failing to control such price inflation on educations materials.

“Our children need other basic school materials but we finish the money on exercise books. I don’t afford to buy my kids anything else like uniforms and bags,”

Addis Standard has observed prices of school materials in neighborhoods like Piasa, Kasanchis, Mexico, and Bole in the capital Addis Abeba. The price of exercise books in Piasa, Kasanchis and Mexico are relatively the same but in Bole it varies significantly.

A dozen of 50 page exercise books were being sold from 780 birr to 1,200 birr in different stationary across these neighborhoods depending on their quality and brands. The prices have significantly gone up compared to last year.

“Our children need other basic school materials but we finish the money on exercise books. I don’t afford to buy my kids anything else like uniforms and bags,” said Jemal.

Gamechis Wangari, an employee of a stationery shop in Piassa said the cost of school materials is also inflated due to lack of enough supplies in the market. Addis Standard also met with Alemitu, a mother of two children while she was buying uniforms for her kids in the Bole neighborhoods.

“I waited to buy uniforms for my children hoping that the price would come down, but to the contrary it has gone up,” she said. According to her the price for a school uniform has almost doubled compared to the last academic year. Last year the price for shirt was 300 birr this year it is 750 birr, sweater which was 400 birr is now 750 birr and trousers rose up from 450 birr to 900 birr.

Alemitu said she used to purchase school uniforms from a local manufacturer called EVO, which is now out of production due to lack of supply of raw materials.

Parents like Jemal and Alemitu say if the government doesn’t do anything about the inflation, they might not be able to send their kids to schools in the coming years.

In public schools, the government provides pupils with uniforms and other basic materials but families say it is not enough. Addis Standard observed exercise books with the logo of the Addis Abeba city administration which was supposed to be donated for public schools for free being sold by individual dealers.

Addisu Abebaw, economics lecturer at Salale University, says price hike over school materials is common during schools re-opening season, but the current price hike is also related to the overall market inflation that has hit the country.

There is severe lack of foreign currency mainly due to the war going on in a different parts of the country and as a result factories have cut off productions which in turn may have caused the inflation according to Addisu.

Abebaw urge the society as a temporary solution to cooperate and help those in need and also encourage manufacturers to use locally available inputs to produce and substitute imported goods.

The average food price inflation recorded last academic year was 40.2 percent, and on the other hand, the inflation of non-food items was at 25 percent, according to the Ethiopian Statistics Agency.