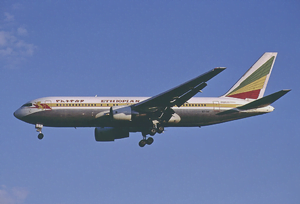 Within the context of non-violent peaceful struggle for freedom and democracy in Ethiopia, April 2012 saw debates on economic boycotting. Some 12 media organizations, for instance, call for an all encompassing  boycott of organizations affiliated with and sympathetic to the regime in Ethiopia. The major target of the boycott has been Ethiopian Airlines, henceforth called Ethiopian. I was following the discussions with keen to ‘see’ how and to what extent the general public, particularly the Diaspora, react to the boycott calls. Unfortunately, the debate has never crossed April- I am not seeing any further dialogues on the topic.
I thus decided to add my own thoughts, with a singular goal of challenging the organizers of the boycott to come forward with a much more compelling argument. First, I highlight the major reasons provided in support of the call. Second, I emphasize on the possible implications of the boycott for the years to come. I finally suggest to the organizers and others to point the ‘arrow’ towards other more boycott-deserving enterprises.

Reasons for the boycott

It is useful to mention the arguments used in support of boycotting Ethiopian. Here, one size does not fit all; the rationales provided somehow differ according to who is calling for the boycott. Four major but  interrelated reasons could be identified.
It may be true that the airline is discriminating individuals and communities, I do not have any information on this. It is also true that employment in Ethiopia in general is not based on merit; Ethiopian is a micro-cosm of the national labor market. The Prime Minister once publicly argued that anyone who is loyal to the regime is much more valuable than an accomplished professional. No evidence is required to ascertain the level of corruption, nepotism, discrimination, imprisonment, torture, killings, and other forms of abuse in Ethiopia.  The conclusion is that any peaceful struggle including economic boycotts of cashy organizations is self-evident and justifiable and would bring dictators down some day.

Ethiopian too big to fall

Boycotting Ethiopian seems however different and complex. All the discriminations the airline does should be condemned with the harshest possible terms. All citizens should have equal opportunity in Ethiopian and based on merit. However, important in this regard is to document/study the mechanisms and the extent to which the airline is discriminating. I saw on the Internet a few personal accounts from some people who have been working with Ethiopian and who have been mistreated. A much more consolidated account of the operations of the enterprise should be exposed to the Ethiopian public. We will only after that talk about and condemn with absolute confidence the airline’s standing, to the extent of organizing national and international boycotting.
If we boycott now, I see at least two grand issues standing. One,  raise the term Ethiopian airlines to anybody, Ethiopian citizen or a foreign national. You will probably witness a positive reaction. The airline has been since its establishment in 1945 so powerful and reliable that it receives regional and international awards several times. It tops even Egyptian and South African airlines many times.Yes, Ethiopian airlines is consistently profitable even during the  downturn of the global financial market. In a way, the enterprise turned itself into an Ethiopian ‘brand’. If we convince Ethiopians and foreigners to boycott it, we will,for sure loss the precious brand that we will need badly when EPRDF leaves office. If Ethiopian is beaten by competing carriers because of the impact of the boycott, it would take us centuries to re-claim our position, if that is even possible.
Two, Ethiopian currently has 48 aircrafts and 43 orders from Airbus, Boeing, and Bombardier. Although the extent of loan could not be known precisely (the airline has never made all its operations public), it is estimated that the airline might have it in hundreds of millions of dollars. With or without EPRDF, we Ethiopians are liable for paying back these millions, plus interest rates, for years to come. If we effectively boycott, Ethiopian will be seriously challenged and would collapse pretty soon, let alone being one of the top in Africa. The cost following the possible collapse and the debt we have to take care are surely too high to Ethiopia. We will be losers twice (we will have idle and depreciating old and new aircrafts, and we will have to pay back the debts for which we benefit nothing) if we effect a sustained boycott. The regime and its leaders will not suffer from both, practically speaking.
I think we better become much more articulate when it comes to boycotting Ethiopian. We need to further weigh the extent of damage to the Ethiopian mass, who is required by law to pay all the massive debts. We do not have to build a mountain of debt for the generation to come simply to shake and handicap an already aging regime. If Ethiopian collapses, it is not the regime or those at the top who are gonna bear the consequences (pay the debts); the final victims are the poor 80, 000, 000 +. Some of Ethiopian Diaspora may opt to boycott flying Ethiopian but bringing the issue to foreign customers is too much to bear. The effort of ‘fighting’ dictators should not compromise the future strategic positioning of the nation.
A more logical and compelling strategy is boycotting EPRDF-owned companies such as EFFORT and the likes. These are unaccountable and greedy organizations that are ‘bulling’ and ‘killing’ the Ethiopian economy. If the mass boycott these in a sustained way, the effect would be titanic enough. But for now, despite it being a major cash cow for the regime, let Ethiopian carry the national flag, as  there will for sure come a time when the brand created years ago and with great sacrifice would be much needed by and profitable to Ethiopia.